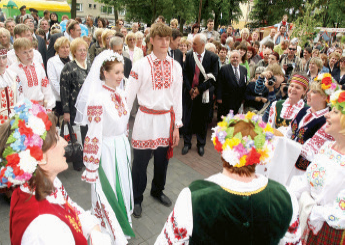 Viktoria Mikhno, who heads the group, explains, “Wedding ceremonies are part of our traditional heritage; this exists today, but is embodied in other forms. In many countries, ancient traditions are used in modern ceremonies, while in our country, for some reason, we seldom do so. We decided to take action, as our ceremonies are so meaningful. It would simply be wrong to allow them to be forgotten. Traditional wedding songs are a wonderful addition to a modern ceremony: just as viable as anything offered by the modern ‘entertainment’ industry. It’s actually becoming fashionable to marry in national dress rather than in white, with the groom in a formal suit — so why not add more elements of a traditional ceremony?”

The album includes songs from across all Belarus, so that listeners can enjoy the rich legacy of Belarusian singing traditions from all regions.

In order to implement the project, a whole generation of singers were called upon. Thanks to their talent and dedication, the album came to life, emphasises Ms. Mikhno. She tells us, “Our singers managed to convey the experience of previous generations, sharing the wisdom of a bygone age. We sang the songs over and over, so that those young girls’ voices would seem to have wisdom and maturity. While preparing the project, some actually became married themselves — so were able to promote the process, having the songs sung at their weddings.”

Songs instead of psychologists

Ceremonial wedding songs were not just performed in celebration, but with the intent of sharing advice and creating a certain mood. Ms. Mikhno explains, “While today’s brides-to-be look at glossy magazines and Internet sites for advice and await their big day with excitement, in days gone by, the newly married state was considered to be a difficult, transitive stage. Brides were encouraged to ponder the changes before them and the challenges of joining a ‘new family’: submitting to different routines and duties. Ceremonial songs aimed to prepare brides for this time in their life. In fact, they fulfilled a psychological role, warning brides to be realistic in their expectations, rather than living in a fairy tale. Songs detailed the cares and duties to be expected — including the birth of children. They helped young women make the adjustment to their new life.”

Such songs also taught young people how to behave during a ceremony, to whom they should give presents, and how to treat relatives. Also, in many songs, newlyweds, matchmakers or parents are praised.

Ms. Mikhno continues, “I love a song we recorded in 1992, in the village of Zagatie, in the Chashniki District of the Vitebsk Region. It was sung while a bride’s hair was being combed, before placing her headdress upon her head. The song tells of her hair appearing as if it has drops of gold falling upon it, as her bridesmaids sit and comb her tresses. The song’s mood is so beautiful.”

The Wedding album is the first in Belarus to collate ceremonial wedding traditions. Now, any bride and groom incorporating some songs from the CD into their wedding ceremony will be helping preserve our national cultural heritage, while bringing delight to all fans of folk music.