We have been and remain a sovereign state

Chatting for over 90 minutes with journalist Ryan Chilcote, Mr. Lukashenko answered almost 50 questions. Read on for key extracts from the interview. 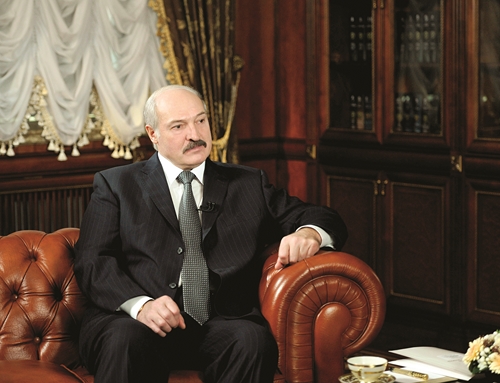 The situation in Ukraine

Mr. Lukashenko believes that it will be some time before peace is brought to Ukraine. He noted, “I’m fearful that this may be the calm before the storm. Certain trends and facts are evident, showing that there is still a long way to go for Ukraine to achieve peace.”

The President is concerned that the USA has lacked open involvement in the process. He underlined, “I believe that, without the Americans, there can be no stability in Ukraine. Meeting recently with representatives of the United States of America, who visited us, I strongly conveyed my view, saying that I didn’t know what the Americans wanted here, in Eastern Europe, particularly in Ukraine, but that, if they desire peace and stability, they should immediately engage in this process.”
Of course, Russia has a role to play in settling the Ukrainian conflict. Regarding the possible participation of Russia in the conflict in Donbass, Mr. Lukashenko noted, “Russia is not so stupid as to risk sending troops there. It would be wrong to blame Russia for sending its regular troops into this conflict. There are plenty of people in Russia who want to fight in Donbass, either for money or for ideology. Thousands have travelled from Russia and elsewhere but I’ve been informed that no Belarusian mercenaries are among those fighting.”

The President is hopeful that Russia and the USA may work in unity to bring peace to Ukraine. However, he asserts that, if the United States of America provides Ukraine with serious armaments, it could lead to the escalation of the conflict, and would push Russia to respond. Mr. Lukashenko warns that a war could begin since ‘neither party trusts the other’ and ‘many armed people in Ukraine conform neither to the instructions of the President nor to Ukrainian army rules’. He laments, “Their presence also raises the degree of mistrust between the conflicting parties. Not everyone has adhered to the Minsk memorandum on the withdrawal of armaments from the contact zone, which is dangerous since it risks resumption and escalation of conflict. I’m afraid to say that it may lead to the open involvement of other states.”

Ways to solve the crisis

The President has repeatedly advocated peaceful regulation of the Ukrainian conflict, saying, “I believe that we have not yet wasted our opportunities. In order to maintain the integrity and unity of Ukraine, we must implement the Minsk agreements signed by the leadership of Ukraine. It’s impossible to avoid contact with the current leaders of the DNR and LNR.

Mr. Lukashenko is convinced that those who are party to the Ukrainian conflict must negotiate some form of peace, including discussion of changes to the Constitution. He commented, “Some speak about federalisation and autonomy, while the Ukrainian authorities advocate decentralisation. These clear-cut and essential issues can be entrenched in the Constitution of Ukraine. Decentralisation is good. We need to give special status to these territories, to end conflict. Territories should be restored in order to see the situation improve, sooner or later. This should be done if we want to bring peace and integrity to Ukraine.”

The President tried to explain the West’s cautious attitude to our country, saying, “Europeans, and especially Americans (I intend no offense) believe, or at least have done so in the past, that the Belarusian regime, as they call it (our internal state system and our form of government) does not correspond to their views and ideas. They’ve accused us of lacking democracy and say that we’ve violated human rights, asserting that Belarus needs to ‘change’. They tried to ‘change’ us via various methods but this hasn’t worked. They’ve labelled me as a ‘dictator’.

The President is convinced that all sanctions are an anachronism, without use, being senseless restrictions — towards our country and now Russia. Mr. Lukashenko notes that modern globalisation prevents sanctions working since, ‘If you put pressure on us, the door is open to other states’. He added, “We’ve been co-operating very effectively, and still do so, with Russia, China, India, and other states in Asia and Africa, as well as Latin America. Thank God our relations with the United States are also normalising now. Sanctions are an anachronism; time, which is the chief justice, has proven me right.”

The President noted that, amid recent events in neighbouring states and the wider world, Belarusians have begun to appreciate more than ever that nothing is more precious than stability and peace. He stated, “Belarusians understand well that the state should be stable and that peace is our main priority. We may be slightly poorer than others, lacking resources to become wealthy, but we live in a peaceful country, where our children and elderly don’t die from shrapnel and bullets. We should all, including myself, in power, do our best to keep Belarus sovereign and independent for the next generation of authorities and politicians. We will do so.

Mr. Lukashenko commented on the number of Russian politicians who think in an ‘imperial’ manner, viewing Belarus solely as ‘some north-western province’. He underlined, “Our firm answer is that we won’t ever be some north-western province, just as we will never enter into conflict with Russia. The Russian leadership has never raised the issue of whether Belarus should become part of Russia. We have been and remain a sovereign, independent state.”

The President said that the last time he had discussed this issue with Putin was a year after the last presidential elections in Russia. “I was happy to hear him say that he had no intention of ‘subduing or capturing other countries, including Belarus’. “He told us that we both have our own ‘residences’ but remain close, like ‘brothers, often visiting each other’. That’s the sort of discussion we had,” stressed Mr. Lukashenko. He is convinced that Russia will never fight Belarus, saying, “The leadership of Russia has no reason to look badly in our direction. The Russian people would not understand such a move and what would be the reason for fighting us? There is none so I doubt that Russia will take up arms against Belarus.”
He added, “Nevertheless, I stress again that whoever raises a sword to us will perish by the sword. We will fight Europeans, Americans or Russians if they determine to take our land, where Belarusians should live. Every Belarusian citizens desires to live on their own land, in their state, so the Belarusian nation will defend itself. Look at history. We lost every third resident in WW2, but we didn’t fall to our knees before the aggressor. We continued defending our homeland. We would do the same today, in the same way.”
The Head of State noted that the West believes Vladimir Putin to be ‘seeking to restore some empire’. However, Mr. Lukashenko emphasised, “He doesn’t seek to restore any empire. However, if someone goes too far and starts poking Russia, Putin and the Russians will respond. Tread carefully around Russia as, although Putin has no intention of conquering anyone, he is a contemporary person and understands the dangers of the modern world.”

The President accused the Americans and the EU and other political centres of being just as ‘guilty’ of accusations of interference in the internal affairs of neighbouring countries as Russia. He underlined, “Why did you go to Libya, Iraq, and other places? Do you have vital interests there? So has Russia. It has vital interests in Georgia and in other neighbouring countries. Such behaviour is common to all big states. They somehow believe that to survive in their giant form and to advance their interests elsewhere, they need to dominate others. You cannot accuse Russia alone.”

Speaking of relations within the Union, Mr. Lukashenko said that, regardless of Ukrainian events, Belarus-Russia relations haven’t changed in any way.

Single currency for the EEU

Unfavourable external factors, including the devaluation of the Russian Rouble, and falling oil and gas prices, have undoubtedly made the situation in Russia more complex and have affected Belarus. The President believes that the situation is difficult, but not crucial. He notes, “It’s bad that we were so slow to diversify our economy and exports. We export more than half of what we produce, so we depend on foreign markets. We’d failed to extend beyond the Russian market, and markets of former Soviet Union states, so we now we need to facilitate the process. An inflow of currency would help us to maintain the exchange rate of the Belarusian Rouble, which has now stabilised to a degree.”

Orienting points regarding inflation and gold and currency reserves have been stipulated, with Mr. Lukashenko asserting, “With regard to inflation, we aim for 12-15 percent today and for one-digit numbers next year. We can achieve this. With regard to gold and currency reserves, it’s difficult to accumulate them at the moment but we must ensure that volumes don’t fall.”
Заметили ошибку? Пожалуйста, выделите её и нажмите Ctrl+Enter