Warm meeting at the Black Sea

Two bright accords finish this summer — the Creativity of the Young Festival and the cadet military-patriotic session.

During the penultimate week of August, Anapa lived in the sparkling whirlpool of children’s holidays. The famous Black Sea resort hosted the international musical festival — Creativity of the Young — for 8th time. Winners of regional contests from all corners of Belarus and Russia arrived here to compete in their vocal and choreographic talents. Young starlets lived, rehearsed, performed and recuperated as one big company, since, from their first meeting, the children felt themselves as a single family team rather than rivals. By their example, the children again proved to the adults that all existing differences can be easily overcome with the help of creative activity.

The Creativity of the Young Festival, which is actively developed with assistance from the Union State Standing Committee, has already occupied its own niche among dozens of children’s cultural events. Out of all international festivals, which have taken root on the Anapa land, this event is the most ‘starry’ in the number of talents, the ‘largest’ in the level of stage performances and the ‘richest’ in its programme of entertaining events. Where else could you see how the best children groups of the two countries work, and visit master classes of artistes whose performances were previously seen by the youngsters only on TV? The young musicians had a chance to listen to competent opinions during the creative contest, as this year, the jury was again headed by the author of the famous Plasticine Crow, the Honoured Figure of Arts of Russia, Grigory Gladkov. The composer is convinced that the major task of adults is to give children hope for a peaceful future.

“Only peace is the foundation for the whole of life. Another obligation of adults is to give children an impulse

to work and to achieve new heights. In my opinion, the Creativity of Young Festival facilitates this in the best possible way,” he noted.

One more important task of the festival is to involve the growing generation of both States into the process of construction of the Union State. It’s not by accident that the Creativity of the Young occupies a vital place among the events of the Standing Committee. The State Secretary of the Union State, Grigory Rapota, calls the forum one of the brightest Russian-Belarusian projects in the sphere of upbringing and development of creativity among the growing generation.

“The festival unites and enables children to become familiar with deep national traditions, while also making new friends and simply having a good rest. Moreover, the Creativity of the Young helps young talent, as well as their teachers, to establish and strengthen friendly and creative contacts. Many artistes and groups also receive proposals to take part in other events of the Union State,” he said.

Laying flowers at the monument of the Great Patriotic War heroes on the eve of the holiday became a good tradition. The participants of the forum didn’t change their ritual and the honour of perished soldiers was commemorated by the youngsters together with residents of the city. The Deputy Mayor of Anapa, Lyudmila Murashova, named the Black Sea resort a ‘centre of Russian-Belarusian ties’ and the festival as ‘the most important on the Black Sea coast’. “Definitely, there won’t be losers in this contest of talent, since there’s enough sun, sea and warmth here for everyone.” 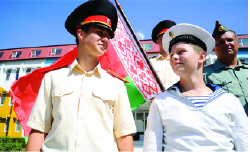 Moreover, on the opening day, the wearisome two-month heat suddenly changed to cloudier weather. Local residents breathed freely, while the guests grumbled uncomfortably. Nevertheless, an hour before the festive concert the sky cleared again and organisers saw this as a good sign.

The First events of the big concert sounded at sunset, on the city’s Teatralnaya Square. The guests and residents of Anapa were welcomed by young talent from Moscow and Mogilev, Ulyanovsk and Belarusian Volkovysk, Moscow Region’s Klin and Grodno Region’s Mir. In total, there were almost 150 performers, including the TeremOk! vocal instrumental ensemble from St. Petersburg.

“We’re united by our love for Russian culture,” noted the artistic leaders of TeremOk!, Anna Pokidina and Alexander Shirunov. “The ensemble was created just three years ago, but has already achieved much. It became a winner of a whole range of regional festivals and performed at the most famous concert grounds of the city.”

The audience also heartily welcomed the VI-ZA-VI dance group from Orsha, which gained popularity in Belarus, as well as far beyond its borders, which is shown by four Gran Prixes from international choreography festivals.

We can endlessly speak about children talent at the Creativity of the Young Festival. ArtLiga, the children’s pop group from Gomel and Ulyanovsk’s Solovushka pop song group were awarded with loud applause in Anapa, as were the Aquarelle vocal group from the Brest Region and the Lapushki dance group from Klin. The winners were awarded diplomas and valuable prizes. In line with the decision of the jury and organising committee, the most original performances were also given special awards. The Creativity of the Young Union State project again helped to set up hundreds of new bridges of friendship between Russian and Belarusian cities and towns, thus laying the foundation of mutual understanding, trust and friendship.

The Union State’s Creativity of the Young Festival was first held in 2005 in Moscow. Its founders were the Parliamentary Assembly of Belarus-Russia Union State, the Union State Standing Committee, and the culture ministries of the two counties. In 2006, it was decided to make the musical holiday an annual event and move it to Anapa, where it has taken roots and has been organised for eights year in a row.

Alongside the Creativity of the Young Festival, Anapa’s Vita clinic has also hosted these days the 8th military-patriotic session of cadets, and those studying in Nakhimov and Suvorov military schools from Belarus and Russia. This is already a good tradition and the would-be military elite have been recuperating in Vita since 2007. All these years, the country ‘Vitalia’ has existed here, which is indissoluble union with Russia and Belarus. Actually, ‘Vitalia’ is a children’s game model of the Union State, with its own Mayor’s Office, deputies and speakers. Everything is like in real life.

“The major goal of such sessions is the upbringing of elite for the 21st century army,” notes Ruslan Kofanov. “I’ve come to Vita as an ordinary pupil of the military school and here became a ‘minister of justice’ and now teach at Moscow Suvorov Military School.”

The Day of the Union State is the major holiday of the small, but friendly ‘Vitalia’. As is traditional, it started with performing of the anthems of Russia and Belarus, the ceremony of carrying-out of the Andreevsky flag and the flags of the neighbouring States. Last year, a monument was unveiled in Vita to Generalissimo Alexander Suvorov. Now, another monument has appeared nearby — that to Admiral Pavel Nakhimov. Pupils of the military schools commemorated the memory of the Hero of Sevastopol Defence with a minute’s silence.

The holiday was opened by a guards’ parade of the pupils of Minsk Suvorov School. Among its graduates are four Heroes of Russia and dozens of generals. After Minskers, cadets of Yekaterinburg Suvorov Military School and those of St. Petersburg Nakhimov Naval School followed. Then the amphitheatre welcomed Kazan, Ussuriysk, Ulyanovsk, Tver, Moscow and St. Petersburg Suvorov schools. Spectators could also see Aksai Cossack Cadet Corps — the only participant of the annual Victory Parades in Red Square among Cossack children’s corps. 28 cadets of Grozny Military School at the Russian Interior Ministry closed the parade.

The final accord of the holiday is the prolongation of the symbolic treaty of the joining of the ‘Republic of Vitalia’ to the Union State. The document was signed by clinic director, Vasily Dimoev and Responsible Secretary of the Parliamentary Assembly of Belarus-Russia Union State, Sergey Strelchenko. In its turn, the Parliamentary Assembly obliged to recognise all residents of ‘Vitalia’ as citizens of the Union State and provide fruitful rest and creative development for them. The congratulatory greeting of the Great Duchess, Maria Vladimirovna, was also addressed to the youngsters: ‘Be responsible for the future of the State from your youth — its fate is in your hands’.