Nesvizh National Historical-Cultural Museum-Reserve is known worldwide: in 2012, it received 430,000 tourists, followed by 390,000 in 2013. Foreign visitors are attracted by the site being included on UNESCO’s World Cultural and Natural Heritage List and are fascinated by the lifestyle of the famous Radziwills. Some even offer help in restoring local historical monuments.

The Reserve’s Director, Sergey Klimov, believes that the state has helped enormously in promoting Nesvizh but concedes that UNESCO’s recognition has ensured global fame for the architectural monument. “UNESCO acknowledged the significance of Nesvizh’s sites relating to the Radziwills only once restoration work began, with the President’s support. Nevertheless, the inclusion of the castles of Nesvizh and Mir on UNESCO’s List has expanded possibilities for Belarus’ wider representation abroad. It’s an additional path to creating an attractive image for the country globally.” 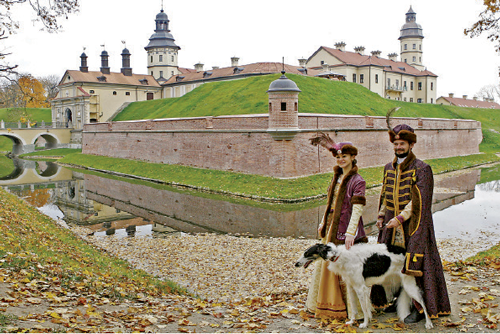 With UNESCO’s help, volunteer camps are being set up near Nesvizh to study the district’s past and to collect historical artefacts. Enthusiasts are already flocking from Holland, Ukraine and Russia, with some helping clean up Alba Park this summer.

Ms. Bokova believes that UNESCO offers a wide platform for international co-operation in the field of cultural heritage. “We’ll continue our joint work to preserve Belarus’ legacy. Belarus is an old country and has much to show to the world,” she notes.

Foreign volunteers are offering their help to Belarusian sites outside of UNESCO patronage, with summer camps for history lovers regularly organised at the castles of Lyubcha and Krevo and at the churches of Synkovichi and Murovanka. Timofey Akudovich — a local history researcher who supervises educational projects for the International Council on Monuments and Sites’ Belarusian Committee — explains, “We’ve run camps countrywide for three years in a row and have now cleared Golshany Castle of rubbish, so that we can prepare the ruins for conservation. In addition, we’ve developed grounds around Smolyany church (in the Orsha District) and have inventoried its ancient cemetery. In fact, we’ve uncovered the ruins of a castle, a Roman Catholic church, a monastery and 20th century buildings there. We are now preparing a proposal for the Ministry of Culture to include Smolyany’s historical centre on Belarus’ List of Historical-Cultural Treasures (as a single city-planning monument).”

Mr. Akudovich and his Golshany colleagues are being assisted by the village council and a church priest in revamping the Smolyany site, and young people are lending their help this summer following an online plea.

The scope for volunteering is huge, and there are certainly plenty of sites needing help: almost 5,400 are currently included on Belarus’ List of Historical-Cultural Treasures.