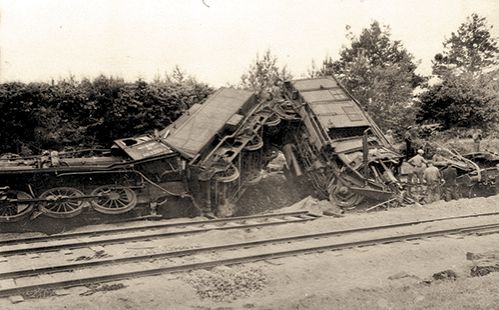 This year, Belarus celebrated the 70th anniversary of liberation from Nazi occupation. Red Army soldiers and partisans played a major role in achieving this long period of peace. These brave soldiers forged their victory in the depths of the Belarusian forest. The resistance forces hid in pinewoods and marshes during the daytime, and at night they emerged to fight the enemy. Dense forests and pushchas of Belarus, covering the majority of our country since ancient times, provided safe shelter for the resistance fighters. Many of these sites have kept their secrets until now.

Recently, whilst flying over Paris and viewing the suburbs from above, I was struck by the nature of the landscape, lacking in forest and primarily comprising of farmland. It appears France has only small areas of oak and pine, although the fields are highly cultivated, with each boasting its own colour. Belarus, however, contains a variety of forests, differing in size and structure. These areas blend into each other, with cultivated fields like small islands in their midst. At present, around 40 percent of Belarus is forested and in 1941 this figure was even greater. 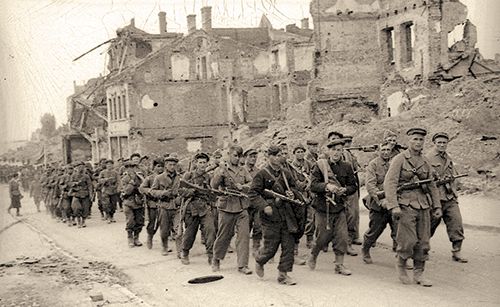 It was the summer of 1941 when the Fascists attacked Belarus, en route to Moscow. However, they failed to gain control. Partisan brigades pursued their covert activity behind enemy lines, safe in the knowledge that the density and familiarity of the forest protected them from detection. Nonetheless, the scale of Nazi destruction was great; local populations were repressed and villages laid to waste. During the years of the occupation, over 140 punitive reprisals were conducted; the first, on Pripyat Marshes, took place in July and August 1941, in the Brest, Minsk, Pinsk and Polesie districts. Overall 628 villages were burnt down with their residents, while 5,295 were partially destroyed.

Partisan groups had begun to form in the early days of the war. On June 23, 1941, the first reports were made of resistance raids and sabotage against German troops in the west of Belarus. By the end of June, four partisan brigades were operating in the occupied territory; in July, their number rose to 35, becoming 61 by August. The wave of opposition was rising and the forests were a major contributing factor to their success. 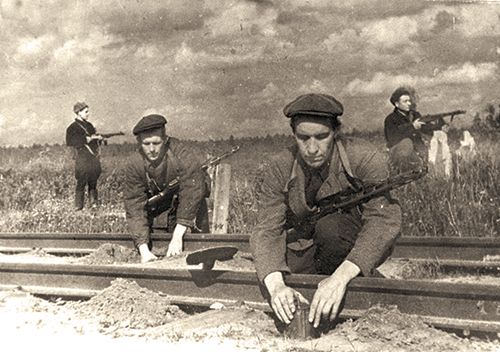 Belarus was an important link in the war on the Eastern Front. Its geographical position was of major significance: firstly, numerous woods and marshes created favourable natural conditions and, secondly, the main routes from the West to Moscow passed through its territory. Consequently, on June 30, 1941, the Central Committee of the Communist Party of Belarus joined the regional party organisations of Eastern Belarus in creating an underground network and a more substantial partisan army. To achieve this, 1,215 party members and around 5,000 Komsomol (Youth League) activists were operating in the occupied zone in July and August.

In 1942, specialists were sent from Moscow to Belarus to manage the construction of partisan aerodromes in the forests: almost 50 were constructed during the war years. The resistance organisation ran personnel on military lines, which proved highly effective. 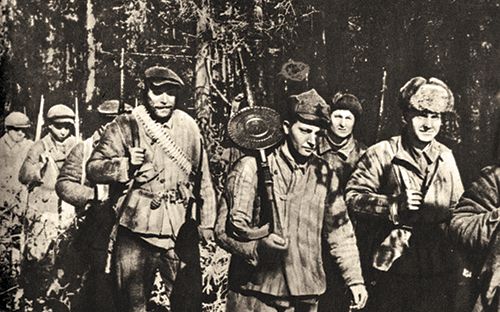 By the end of 1942, the Belarusian resistance movement consisted of approximately 50,000 fighters, who controlled almost 30 percent of the country and were able to significantly damage the occupation. In early 1943, their activity became more formalised and better planned. Belarusian villagers hid in the forest to escape from the Nazis, who burnt down houses and killed sympathisers. In 1943, the movement grew by over 150,000 members, controlling up to 25 percent of the Vitebsk, Polesie and Mogilev regions. The mostly inaccessible areas controlled by the partisans, with marshes and dense forests of low economic significance (except for wood processing) became the perfect territory for resistance operations. As a result, almost half of Belarus was in their hands by the end of 1943.

In June 1941-July 1944, Belarusian partisans successfully destroyed or derailed 11,128 enemy trains and 34 armoured trains, also destroying 819 railway bridges and 4,710 other bridges. Over 7,300 km of telephone and telegraph lines were cut and 305 planes shot down. Added to this was the destruction of 1,355 tanks and armoured vehicles, 438 heavy artillery, 18,700 cars and 939 military storehouses. The forest facilitated all these operations. As well as Belarusian and other Soviet nationals, the movement attracted Poles, Czechs, Slovaks, Bulgarians, Serbians, Hungarians, French, Germans, Austrians, Croatians and Macedonians. It was thanks to this combined efforts that the occupiers were finally defeated. 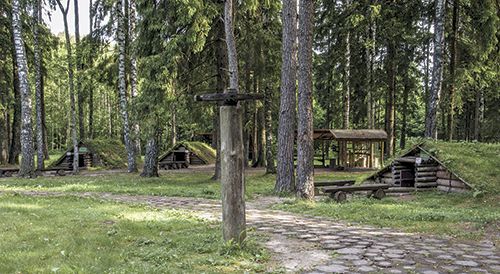 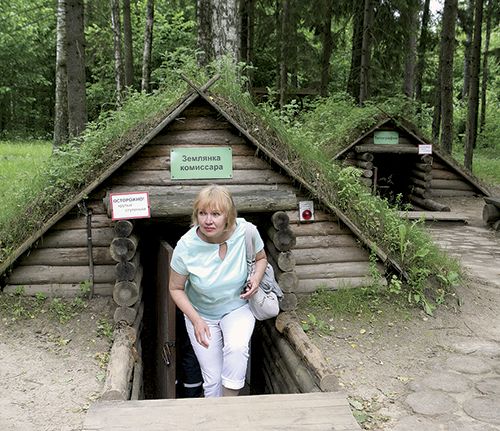 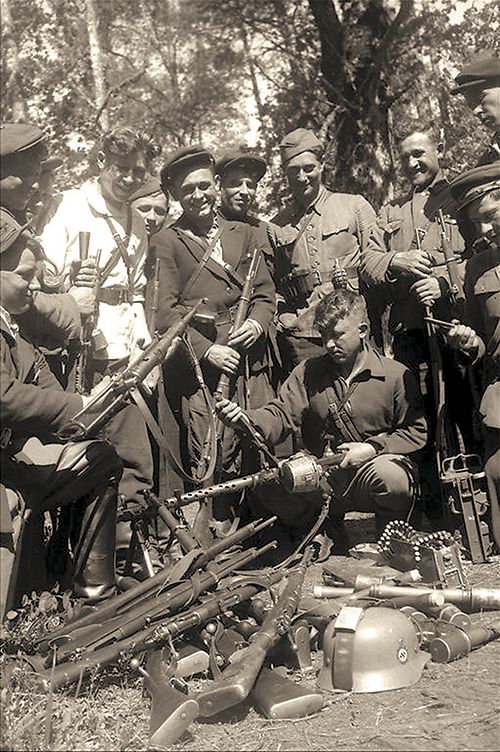 Report by the Central Committee of the Communist Party of Belarus on the destruction of cities and villages and killing of peaceful residents. June, 1942.

When the Germans come, everyone escapes to the forests, because anyone unexpectedly caught by the Germans in a settlement is killed, irrespective of their age. Residents of the burnt villages in the town of Klichev hid in the forests, under the protection of the partisan brigades.


Report by the Western headquarters of the partisan movement, on the battle between German occupiers and partisans in the Klichev and Berezina districts. July, 1942.


Evidence of Mr. Shcherbatov on the occupiers’ cruelty in the Borisov District. September 5, 1942.

Not long ago, we experienced a wave of incredible cruelty by Hitler’s occupying troops towards peaceful Borisov residents. Punitive troops burnt down villages and killed hundreds of innocent people. A few of the Lisin villagers escaped to the forest, running from the soldiers.


Act of crime by German occupiers during their punitive operation in the Zhitkovichi, Petrikov and Lyaban districts. March 12, 1943.

Seven villages were burnt down in the Lyuban District, including 922 houses. Villagers escaped to the forest, also taking their cattle, belongings and bread.


Report by the Logoisk District Committee of the Communist Party of Belarus, on occupying troops’ crimes during punitive operations. No earlier than May 15, 1943.

Passport re-registration was launched in the district and all residents aged 16-55 were obliged to come to Logoisk on set days to have their passports sealed. As a result of that policy, around 1,000 people were sent to Germany to work. A significant proportion of the population failed to attend the re-registration, preferring to hide in the forests.

Before German troops arrived, the partisans had recommended villagers to leave their houses and escape to the forest. They warned that the Germans would kill those who failed to act as advised. Most followed their advice, only to return some time later to see the corpses of their fellow villagers. The Wehrmacht had also senselessly ransacked their houses.


Report on German occupiers’ crimes in villages across the Begoml, Borisov and Pleshchenitsy districts, during punitive operations in May 20-June 20, 1943.

After destroying villagers’ property, the Germans began to search the forests and tracks and round up people in the villages. On the edge of the forest, the Fascists came across the residents of Usokhi. One of the villagers, Palyuta Chubatar, was holding a holy icon in her hands, asking the Fascists not to touch peaceful people.


Recollections of Ms. Govar, from the village of Vostok, on the burning of Ala.

Soviet troops approached the left bank of the River Dnieper  in autumn 1943. At that time, the occupiers were strengthening their positions on the right bank, forcing the local villagers to dig trenches and removing young people and sending them to Germany.

Zheleznyak Brigade partisans had united with the main army and, following a lengthy period of planning, a major attack took place. My husband, an officer in Zheleznyak’s reconnaissance department, was under the command of the heads of the army. I remained in the village of Vostok, at my parents’ house. People from the neighbouring villages were moving towards the frontline (by the Berezina River), passing through the forests. Ala was the last village on the route and, despite being small, accumulated many refugees. My mother Matrona’s hesitation in letting us join them inadvertently saved our lives. My father, Akim, was a partisan courier. He knew the surrounding area well and took us to a small island amidst the marshes, two or three kilometres from Ala. We built a mud hut and had a small stove. We spent our nights in the hut but during the daytime went further into the forest to hide in the bushes. There were other refugees like us, hiding not far away. We all fell ill with typhus, the small children suffering most and sadly, my three-month-old daughter Galochka did not survive.

In the morning of December 14, 1944, shots were heard from the area of Ala. We heard dogs barking and people wailing. Hearing the horror unfolding, we kept silent until eventually we saw black smoke and everything was quiet. At night, our parents went to Ala secretly to learn what had happened there, but found no people or houses. Everything was burnt down. My father discovered someone’s leftover food, which helped us to survive. We remained in the forest until March, when our rescuers came. Overall 1,758 Ala villagers died, including 28 of our friends and relatives.


Extract from an interview with the head of the medical service  of the 2nd Minsk partisan brigade by military doctor Petrovich on the burning of Rudkovo (Uzda District). June 6, 1943.

The Germans were engaged in one of their regular purges of the resistance and saw a group of partisans in the village of Rudkovo. The partisans and some locals immediately escaped to hide in the forest. After spending a short time in the village, the Fascists returned later in the day, when they locked villagers inside their houses and burnt 27 of them alive; this happened in March 1943.


Syalyanskaya Gazeta (Village Newspaper) reporting on the Fascists’ burning of villages in the Sharkovshchina District. February 10, 1943.

The Nazi Fascists recently perpetrated a barbaric act in the peaceful villages of Kushtali, Tribavshchina and Selibka, in the Sharkovshchina District. Nazis herded more than 300 elderly people, women and children outside their homes and shot them. 70 houses were burnt down and the villagers are currently hiding from the Fascists in huts in the forest.