Some events remain as vivid as they were upon the day they occurred: Victory Day, on May 9th, is among them

Victory arrives in May

Seventy years is both a ‘lifetime’ and a blink of an eye in the span of history. Thanks be to God, those currently in their 70th year on the  Earth avoided the horrors of the bloodiest war recorded, due to the Great Victory.

Some events remain as vivid as they were upon the day they occurred: Victory Day, on May 9th, is among them. Whatever happens in our contemporary world, the importance of this date never fades, and nor do our memories of the unprecedented heroic deeds of Soviet soldiers. 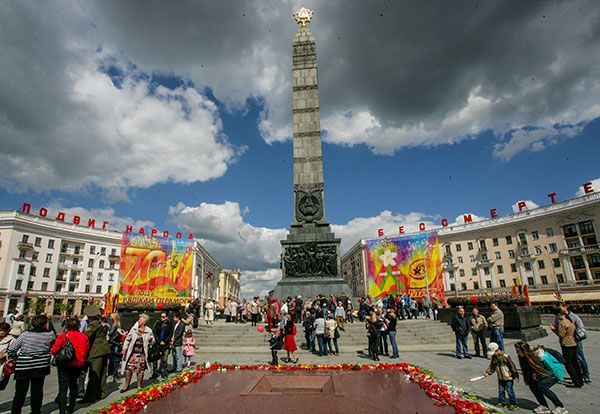 The Great Patriotic War steamed through Belarusian lands, taking with it the lives of around 3 million people; dozens of cities, towns and district centres were destroyed, alongside thousands of villages. Almost half a million Belarusians were sent to labour camps in Germany and, in their years of occupation, the Nazis established dozens of death camps within Belarus, alongside hundreds of prisons and ghettos. Several hundred thousand old people, women and children were killed. This cannot be forgotten.

A resistance movement unrivalled in the world history was deployed within Belarusian territory. The ‘People’s Avengers’ kept the enemy on alert day and night. Over 1.5 million Belarus-born people fought on the fronts of the great Patriotic War, to the bitter end, in battles near Moscow, Leningrad, Stalingrad and Kiev. They took part in the liberation of villages and cities across their Homeland, as well as within Eastern and Central European states. Around 400 Belarus-born people became generals and admirals and commanded armies and fleets during the military years, while 448 were awarded the Hero of the Soviet Union title for their heroism in protecting their Fatherland during those war years (four were awarded twice).

The price of freedom was the life of every third resident of Belarus, as we continue to commemorate and promote wider global understanding. After the Second World War, Belarus became a founding member of the United Nations Organisation: an honour indeed. Belarus was, at the time, a Republic of the Soviet Union and was recognised for its huge contribution to the destruction of Fascism.

May is a special month, being when Victory was declared over Nazism in the Second World War. Belarus continues to honour the heroic deeds of its soldiers. Around 20,000 former frontline men and Great Patriotic War partisans live still in our country. Their number falls each year, but they are surrounded by the state’s attention. Other states may set aside their victorious symbols but, for us, the Victory is a sacred holiday. The Great Patriotic War left its mark on almost every family…

Today’s young people are aware of the sacrifices made by those who fought for them and are often involved in seeking out information on those who died in the war, restoring the names of ‘unknown soldiers’. Moreover, they take veterans under their patronage, remembering the war and honouring its victors.

Time passes and, as politicians say, the world is changing. However, certain values cannot be revised. Belarus is building relations with other countries on principles of good neighbourliness: its contemporary political credo. For those seeking to exercise their ‘muscle’, sporting contests offer the best (and the most peaceful) solution!
Partnerships between people and between countries remain essential, being the strategic essence of international collaboration. Belarus orients towards this path in its foreign policy, taking the format of partnership as the basis for its mutual relations with other countries.