Seven metres of military glory — a victorious monument was erected near Rakovichi village (Svetlogorsk District, Gomel Region) on June 21st, 2014 — on the eve of the famous Operation Bagration campaign’s 70th anniversary. The operation, aimed to liberate Belarus from German occupation, was the 20th century’s most successful attacking campaign.

Under the leadership of Marshall Rokossovsky, soldiers passed over the local Bridsky Mokh marsh in June 1944 to attack the enemy, and this part of our history is depicted on the monument. It features four figurines: Konstantin Rokossovsky, Georgy Zhukov, Pavel Batov and Mikhail Panov. Attacking Soviet soldiers are sculptured on the left and on the right. The background features arrows indicating the two major attacking points of the Red Army.

Veterans who had taken part in the country’s liberation met by the monument with tears of joy and sad memories. Minsker, Lev Klimovich, was among those who began his war service on the marshes. While attending the monument opening, he recalled, “I was 18 then and that was my first attack. I was seriously wounded with a shell just two hours after the Bagration campaign started. I spent six hours in a bog, until nurses brought me out.”

Ivan Malinovsky, from the village of Svetilovichi in the Vetka District, received gratitude from Stalin, for bravery demonstrated during the Bagration campaign near Bobruisk. As the veteran admits, back then, he was impressed by crowds of captured Germans, “Thousands of them were moving, after their entrapment near Minsk. Captured enemies were the best proof of our victory. This thought was shared by our Soviet leaders as well. On July 17th 1944, fifty thousand German soldiers, as well as officers and generals were captured during Bagration and were led across Moscow.”

A Great Patriotic War veteran, Ivan Ivkin, came to the memorial opening from his home in Bryansk. He liberated Belarus as well but, as he now jokes, failed to live until the beginning of the Bagration campaign. “I was ‘killed’ during a fight near Budo-Koshelevo,” he recollects. “After returning to my military unit (with a bandaged hand), my commissar asked me, ‘Where have you come from? We’ve already prepared a death notice for you!’ That was my second birth and, afterwards, I reached Vienna on a tank. We’ll definitely go on living!” 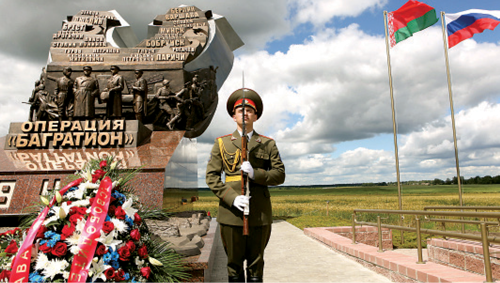 Uniting the efforts of entire world

The idea of a monument at the site where Belarus’ liberation started belongs to poets and researchers Izyaslav Kotlyarov and Sofia Shakh, a family couple from Svetlogorsk. They’ve been pushing for a monument for several years, pointing out that no monuments of this kind existed in Belarus. “Almost all our monuments are devoted to the dead soldiers. However, this would be a memorial honouring an attack — the Victory Monument. Even German historians note that the Bagration campaign became the beginning of the fascist Germany’s defeat,” Mr. Kotlyarov asserts.

The Chairman of Belarus’ State Control Committee, Alexander Yakobson, was among the initiators of the project, which was also supported by the Union State (which allocated 32m Russian Roubles out of the total cost of 42m). Meanwhile, over Br8bn was collected with the help of volunteers and donations of the Gomel Region’s labour teams.

The Union State’s State Secretary, Grigory Rapota, is convinced that such monuments are really needed, “Belarus and Russia and actually the only states in the world which unveil monuments to the WWII victors. These honour true heroes, our fathers and grandfathers, who laid down their lives to liberate the globe from fascism.”

The monument will become a central part of a future memorial. An open air museum is supposed to open on the site as well — devoted to the years of the past.

Operation Bagration, named after the 18th-19th century Georgian Prince Pyotr Bagration, general of the Imperial Russian Army, is known in military history as the 20th century’s most successful campaign, astonishing in its scale. The German Tsentr (Centre) group of armies (including neighbouring groups) numbered 63 divisions; among them were four tanks and three motorised divisions. Those included 1,200,000 soldiers and officers, 9,500 guns and mortars, 900 tanks and 1,350 planes.

The perfect result of Operation Bagration was achieved thanks to the troops’ great masking and enemy disinformation. German commanders made the conclusion that the USSR would attack in the south — in Galicja, Soviet troops had a wonderful opportunity to enter Warsaw and then attack Tsentr’s rearward. The Germans were convinced that the Red Army planned a deceptive manoeuvre in Belarus — which was, of course, a fatal mistake.

Interestingly, such a large scale campaign required close ties with partisans. The ‘rail war’ launched unexpectedly, with over 10,000 explosions, disrupted railways in the area between the Dnieper and Minsk (including to the west of the Belarusian capital). As a result of the Bagration campaign (from June 23rd-August 29th, 1944), the enemy lost 539,000 soldiers with 381,000 dead and 158,000 taken captive. The Belarusian territory was liberated and a 900km gap was created between the South and North groups of German armies. To close it, the Wehrmacht leaders sent an additional 46 divisions and 4 squadrons which eased the onslaught of allies in the west and of Soviet troops in Ukraine and the Baltic States.

Svetlogorsk researcher, Alexey Rusinovich, from the village of Petrovichi, lived with his mother close to the Bagration territory and personally witnessed the war. He recollects, “Foot soldiers were spearheading where the monument is now erected. Panov’s tank squadron was attacking 7km to the south — through our Petrovichi. After the battles, villagers took the log roads to pieces, to build houses. Those log roads had two layers — to withstand tanks’ weight. Of course, soldiers were killed during the attack, but many of them died before the major battles began. Local battling and developing attacks lasted for six months and, in 1944, all our villagers were involved in the burial of corpses. Thousands of soldiers died in our marshes.”

Mr. Rusinovich adds that sorrel was the first ‘monument’ to those killed; it was growing in abundance on the sites where human bodies were buried. Those were hungry times, and children used to collect that sorrel. His mother got angry and always threw it away…

During Bagration, 600,000 Soviet soldiers were wounded and 180,000 were killed. For many years, tall grass and small star-crowned monuments reminded people of the campaign, but Mr. Rusinovich believes that the future memorial will unite the names of all those who laid down their lives for Belarus.