Even during the years of global crisis, the Chinese economy grew at an enviable rate.

Even during the years of global crisis, the Chinese economy grew at an enviable rate. According to last year’s estimates, China’s contribution to the world economic growth totalled around 30 percent, ranking it second only to the USA. Some view the Asian dragon with scepticism, while others have only respect, believing that China is soon to become the world GDP leader. It surely makes sense to co-operate with such a nation, as Belarus is doing, receiving reciprocated interest from China. 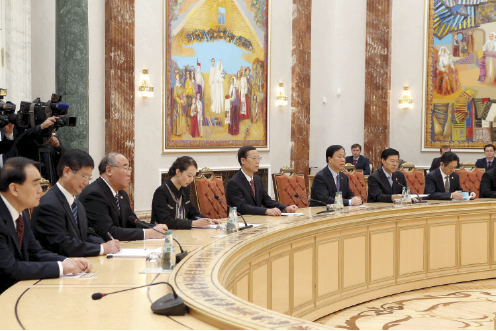 Since diplomatic relations began, over 20 years ago, Belarus’ volume of trade with China has increased almost 100-fold: last year, worth almost $3.3bn. Over 40 representatives and subsidiaries of Chinese corporations are currently working in Belarus, including ZTE, Huawei and SINOMACH. Moreover, humanitarian exchange is active, and around 2,000 Chinese students are studying at Belarusian universities (over 400 Belarusian students in China).

In early 2014 our nations approved a programme to develop comprehensive strategic partnership until 2018. Meanwhile, the First Vice Prime Minister of the State Council of China, Zhang Gaoli, recently visited Minsk, to discuss promising areas of interaction. Meeting the influential politician, President Alexander Lukashenko underlined that the development of relations with China continues to be a strategic priority for Belarus’ foreign policy.

Dozens of successfully implemented Belarusian-Chinese projects confirm that distance and differences in size of population or economy are no obstacle if trust, equality and pragmatism prevail at the inter-state level. Such an approach benefits both countries. Mr. Lukashenko is eager to expand collaboration with China, explaining, “Our interest is in having a very powerful foundation in the face of a gigantic state like China (upon whom our contemporary world relies). Support from China benefits the independence of our state. With the same support from Russia, Belarus becomes almost invulnerable.”

China seeks greater collaboration with Europe, to further position itself as a global super-power; in this context, Belarus is a useful partner.

Trade-economic and investment co-operation is the most important area of Belarusian-Chinese interaction, with various Chinese companies realizing projects in Belarus: from modernization of the power system to the construction of cement plants and roads. The production of Geely passenger cars has been launched not far from Minsk and a recent agreement opens two long-term credit lines from China — worth up to $1bln. The money is to be directed towards industry, power engineering, transport, and the development of small and medium-sized businesses.

The construction of the Chinese-Belarusian Industrial Park should become a truly landmark project, focusing on innovative production with export potential. During the meeting in Minsk, Mr. Lukashenko and Mr. Gaoli agreed to speed up construction of the site.