The 70th anniversary of the Great Victory was the leitmotif of the 48th session of the Parliamentary Assembly of the Union of Belarus and Russia, recently hosted by Grodno. Taking part were deputies of the Parliamentary Assembly, representatives of the Standing Committee of the Union State, representatives of ministries and departments of both countries, and heads of Grodno Regional Executive Committee. 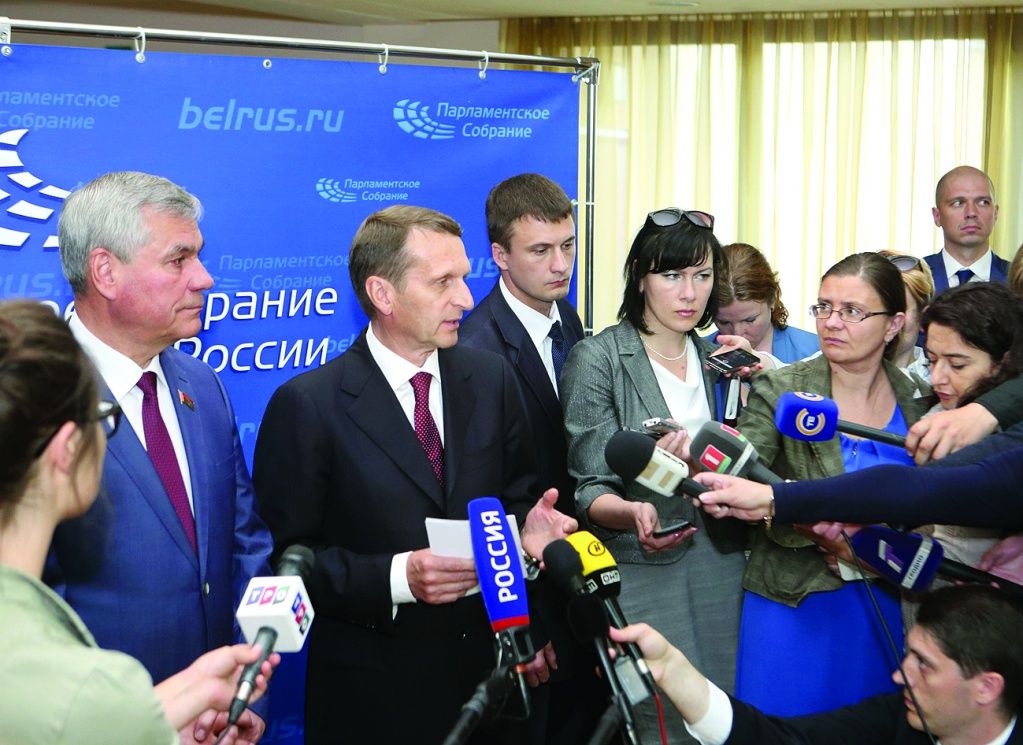 On the eve of the session, the Chairman of the Parliamentary Assembly, Sergey Naryshkin (also Chairman of the Russian Historical Society), met Grodno historians to discuss how best to preserve the memory of the First World War and the Great Patriotic War events in Belarus and Russia. They discussed unfairly forgotten lessons from the First World War, the necessity of joint research, and the need to strengthen our national economies and defence capability.

In course of the dialogue, Belarusian historians suggested that Mr. Naryshkin consider creating a regional branch of the Russian Historical Society, at Grodno State University. The Chairman of the Parliamentary Assembly agreed, promising to look into the idea soon.

In turn, the Chancellor of the Russian State University for the Humanities, Yefim Pivovar, suggested signing agreements between his own university and Yanka Kupala State University of Grodno, to allow joint Master`s and graduation projects, and to expand scientists’ access to archives.

Mr. Naryshkin promised that Union parliamentarians will try to set aside funds from next year`s budget to pay for the erection of a monument to heroes of the First World War, in Smorgon: there, 100 years ago, the Russian imperial army clashed with that of Germany.

Mr. Naryshkin underlined, “The session is focused on identifying priorities and primary tasks for the Union State in the midterm: 2014-2017. Among our basic directions are trade and economic co-operation, a co-ordinated industrial policy, development of the agro-industrial sector, and a uniform scientific and technical policy. The latter encompasses 12 programmes and 18 projects, with a budget of 3.181 billion Roubles. These include the formation of a uniform migratory policy and an integrated transport system.”

The First Deputy Chairman of the Parliamentary Assembly of the Belarus-Russia Union State, Vladimir Andreichenko, mentioned some challenges of recent years, saying, “Priorities for Union State development, confirmed in March, aim to increase mutual trade. Although little time has passed since the adoption of this document, the Parliamentary Assembly is already anxious that targets won’t be met. For example, goods turnover in the first quarter of this year fell by 30 percent (in comparison with the similar period of last year). Terms are frustrated and there are delays.”

Participants of the session agreed that it is necessary to strengthen control over head of states’ decisions and to focus more on national draft laws, to ensure they conform to the Union State creation agreement. Union deputies also summed up the results of 2014 and made plans to hold the next, 49th, session of the Parliamentary Assembly in St. Petersburg.

Those gathered finally took part in a solemn ceremony of laying wreaths and flowers at Grodno’s Eternal Flame, in the city park, where Soviet soldiers, partisans and anonymous ‘fallen’ from the Great Patriotic War are buried.