The unique areas of the Belarusian Polesie were, long ago called the ‘lungs of Europe’ and the ‘Belarusian Amazon’

To see it is to return

The unique areas of the Belarusian Polesie were, long ago called the ‘lungs of Europe’ and the ‘Belarusian Amazon’

It is hardly possible to find on the map of the world such a miraculously preserved corner of primordial nature, rich with peculiar flora and fauna, which is represented by the Pripyatsky National Park. ‘To see in order to return’ is the impression which people have after first visiting this forgotten world.

Place in the sun

The Pripyatsky National Park, which is popular among tourists, is located in between the Pripyat and the Ubort rivers. About 190 thousand hectares of territory is under special protection, and more than a third is occupied by the wild nature reserve. On the huge areas of the ‘Belarusian Amazon’ are natural systems with the richest plant and animal life remaining in primordial condition, including extensive bogs, wide bottomlands, oak-groves and broad-leaved forests.

Pripyat Polesie is not casually called the ‘lungs of Europe’. Here is the largest forest-bog complex of the continent, and these bogs enrich the air with oxygen and the immense oak-groves of Pripyat Polesie are unique across the whole Eastern-European plain.

It is remarkable that the idea of the creation of a bog reserve on the Polesie was expressed by scientists in 20s and 30s. For this purpose, Polish academician, Vladislav Shafer offered the largest European and the perfectly preserved Olmanskie Bolota area. Thanks to the examination of the unique nature of Polesie, a scientific basis for the creation of the reserved territory was created over several decades. In June, 1969 the Pripyat state landscape-hydrological reserve was organised which, in 1996, was transformed into the Pripyatsky National Park. In 1995, an experimental forest-hunting enterprise Lyaskovichi was created, and in 1998, the first Belarusian Museum of Nature opened in the park.

And what is in the final part of this story? Today the Pripya-tsky National Park is one of the most popular tourist sights in Belarus. Fans of nature come on fascinating photo-safaris; here it is possible to see really impressive animals in their native habitat, without open-air cages or barriers.

There are 51 species of mammals in the park, including, wild boar, deer, elk, fallow deer, hare, foxes, muskrats, raccoon dogs and beavers. There are also rare species like the aurochs, European mink, European lynx, badgers, garden dormouse, edible dormouse and hazel dormouse. Pripyatsky Park holds the international status of a key ornithological territory. 256 species of birds live here (79 percent avifauna of all country), from them 65 species are included into the Red Book of Belarus. The bottomland of Pripyat is the largest migratory channel of birds in Europe! And 38 species of fish are found in the rivers and oxbow lakes of the park, amongst these are pikeperch, pike, burbot, asp and bream. About 95 percent of the park area is occupied by picturesque forests. Basically these are pine forests and oak groves, but there are also areas of birch, alder, ash, hornbeam, aspen and also maple forests, lime groves and treelike osier-beds.

Safari-tours across a tourist automobile route of 30 kilometres organised in Pripyatsky Park, are very popular. Over 10 thousand people come here in the summer to see wild animals in their natural habitat.

One can understand their interest in this part of Belarusian Polesie. After all thanks to the feeding platforms for wild animals located along the road, even an amateur with a basic camera can take photographs of herds of wild boar and graceful fallow deer.

Small groups of roe deer slowly leave the road and wander into the roadside undergrowth. However, the more mistrustful elk rarely gets caught by a lens. The most ancient inhabitant of our forests, the auroch, of which there are nearly 70 such majestic animals in Pripyatsky, observes everything from the forest’s edge. The variety of birds at this ‘Safari Park’ is amazing. One can find rare species found in the Red Book: white-tailed eagle, an amazing bird with a 2.5 metre wingspan, black stork, great white heron and others. The excursion across the park lasts more than an hour, but time here disappears.

“The photo-safari in Pripyatsky is increasing in popularity,” local guides add details about tourist life. “During shooting, the photographer is accompanied by a huntsman who provides safety and shows where the animals and birds live. A photographer can take photographs of animals from towers and be in the territory of park up to 4pm. That is the whole daylight, depending on the time of year. The main thing is to catch the moment! Here, it is possible to take such photos which cannot be taken anywhere else.”

The ‘Safari Park’ is intended not only for photographic, but also for hunting tourism. And already, it is another attractive aspect of the National Park about which employees of Pripyatsky talk, “Our huge plus is the unique nature of the area, and accordingly, we try to provide a higher quality of trophies, than others offer. Some of the large wild boars can reach weights of 250kg, something not found elsewhere in Europe. The quality of the hunter’s options improves because here we have primordial nature — bogs and forests, and that means these animals live here for, not just five years, as in Europe, but fifteen or more, and this quality is highly valued.”

As international hunting exhibitions in Europe show, on shooting protocols there are no equals to Belarus among the other countries both on the quantity and quality of the trophies. More often, foreigners are interested in hunting wild boar in Belarus.

“We have high number of wild boar, more than 3.5 thousand, and we should intensively shoot them, otherwise nature itself will regulate their number. There may be a flash of illness. We shoot over one thousand boar each year.”

The demographics of hunter visitors coming into Pripyatsky is diverse: Great Britain, France, Germany, Switzerland, Italy and other countries come here. However, there are also a lot of fans of fishing. After all, the river Pripyat is truly exclusive! Much of it is not as fished as other waterways of Belarus. So it is not a problem to catch especially large specimens. For example, according to locals, a sheat-fish weighing more than 50kg was caught here. Well, that is a good photo opportunity? 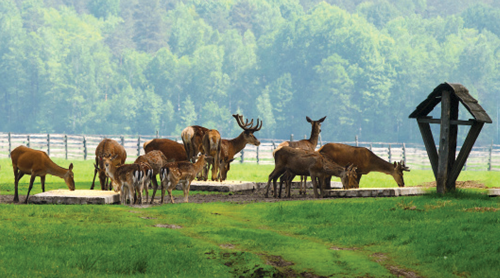 In order that tourists are fully impressed by the primordial beauty of the ‘Belarusian Amazon’, the Pripyatsky National Park has a modern infrastructure meeting the needs of any visitor. Here are both comfortable three star, hotel rooms and small guest houses, situated remotely from civilisation.

Walks along the river, visiting wild nature, photo-art, hunting and fishing… However, this is not all. This special area will touch the soul and will make you take a strong liking to the local Polesie residents, these special Belarusians, who are quiet, slow and wise. It is here where the unique crafts of our ancestors were preserved. The majority of them were lost long ago, and the Museum of Nature and Mode of Life of Pripyatsky Park testifies this in detail. The construction of the open-air museum, where we plan to gather full-scale exhibits — will include ancient Polesie’s estates, pottery and a working smith’s workshop. For example, during weekends, when the tourists come, national masters could give master classes: how to make a boat with your own hands, how to forge a horseshoe or to plait bast shoes.

I wanted to end this article. But how can I without talking about the local cuisine? It is a separate story in a fascinating meeting with the nature of Pripyat Polesie. I am quite ready to call it a separate gastronomic direction of the tourism industry of the National Park. “The assortment is wide — elk, deer, roe, wild boar, duck, goose. Game bird dishes are almost obligatory, and cooked in the traditions of national Belarusian and Polesie’s cuisine beginning with shish kebabs and ending with ragout. Many restaurants in the capital would envy such a varied menu. There are people, who come to us simply to enjoy the gastronomic variety.”

‘Enjoy’. It is a rather accurate word when it comes to the Pripyatsky National Park.