To feel with heart

Belarus is located at the geographical centre of Europe, at the terrestrial and aerial crossroads. However, until now, it has not been investigated fully, many of its secret places remaining hidden to the human eye. Belarus will always be mysterious, capable of surprising us, and, naturally, few have seen it from above. One such is journalist and photographer Sergey Plytkevich, who flew over, taking photos of landscapes, which he now shares with Belarus magazine. Since the 15th century, Lida Castle

The most distinctive sites show the true originality of our country, such as the gothic style 16th century church in Synkovichi, and Lida Castle, which was home to Lithuanian dukes in the 14th century. Just imagine how many wars have taken place on our lands, yet these constructions have survived and remain a tourist attraction.

Zaslavl’s ancient castle and church, dating from the 16th century, werebuilt in Renaissance style. First denoted as Protestant, the church later became Catholic, and then housed a museum in the Soviet times. Importantly, the building remains and isevidence of the centuries-old history of Belarus. Scientists say that water has a deep memory of mankind and the Earth, since it was from there that life emerged. Sometimes, of course,water takes away life. Belarusians living in Polesie are often flooded, as depicted in Sergey Plytkevich’s photo, where a whole village is cut off, catastrophically! Of course, the sight is also beautiful. As Mr. Plytkevich notes,“During major flooding, many Polesie villages can be compared to Venice. There aren’t any gondoliers but people get about using dugouts or wooden boats.”

Another photo shows a village as a green oasis among ploughed fields, demonstrating how human effort can transform land, to produce harvests. Belarusian diligence is famous worldwide. Naturally, elks and storks are the original ancient inhabitants of Belarusian woods and fields. In Mr. Plytkevich’s photos,they appear at an unusual angle. It seems that the elk is breathing heavily, while the stork is just on the point of raising its wings and flying away. The photographer managed to photograph them without being seen, so they appear completely relaxed, in their natural habitat. Eternal inhabitant of our woods: elk

Looking at his shots, you can’t help but think of a certain poem by Yakub Kolas:

Lovely corner of my ancestors!

There is nothing lovelier in the world of God

Than these light coasts,

Where silver rivers are streaming,

Where buckwheat smells of honey,

Where open spaces contemplate the noise of spring waves... There are such ‘artistic’ fields in Rossonshchina

He tells us that his first album, My Belarus,was published in 2001, followed by the release of his tourist directories, sets of postcards, and further albums: Belarusian Exotic, Unexpected Belarus, Wildlife at the Centre of Europe, and Planet Belarus. “With each edition, I’ve tried to convince my compatriots and foreign visitors that our country is not just unusual but exotic. I’ve had the chance to observe wildlife in a way that most people don’t and have long dreamed of shooting our land from a bird’s eye view. Even during my carpentry studies in Polotsk, I had the desire to connect my life with the sky. I could have become an air traffic controller!”

He continues, “I first released Unexpected Belarus in 2005 but this, second, edition features some new shots. I hope that readers of Belarus magazine will be intrigued and enjoy the ‘flight’ over the centre of Europe!” In fact, the book has been published not only in Belarusian but in Russian, English, and German, allowing an even wider audience to enjoy learning about our beautiful heritage.

Yelena Dashkevich, the well-known designer, has helped Sergey transform the book into film format. She tells us, “I wanted to make a visual narration: a continuous streaming of shots. It took us almost a whole year to compile, starting with the image of a plane, denoting that a journey is about to take place, through the air. The name Unexpected Belarus prompts readers to anticipate the unfamiliar.”

Mr. Plytkevich continues his travels and promises to share his shots, taken from unusual corners of Belarus. 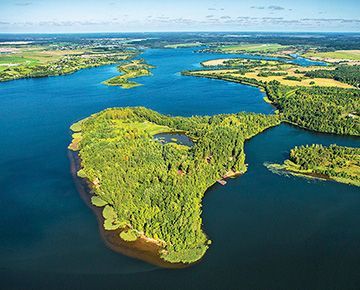