For 70 years, grey-haired veterans, their children, grandchildren, and now great-grandchildren, have cherished the sacred memory of the Great Victory

This is our Victory!

For 70 years, grey-haired veterans, their children, grandchildren, and now great-grandchildren, have cherished the sacred memory of the Great Victory. Nobody can break the strong thread of generations, rewrite history or consign to oblivion its heroic pages. “This is our Victory,” say millions of Belarusians and Russians, “And it will always be with us!” 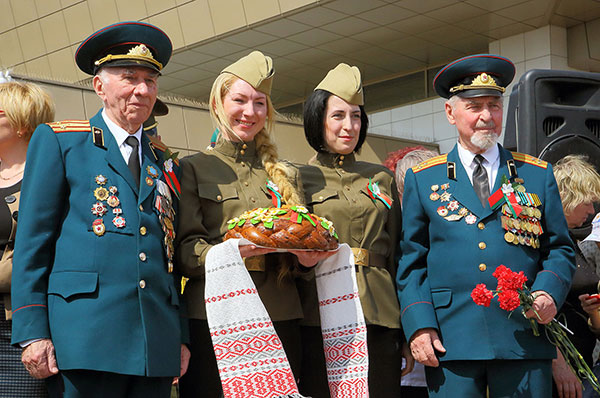 Hundreds of monuments are devoted to the unprecedented courage and heroism of Soviet soldiers and another was recently unveiled in Belarus: on the very spot where Operation Bagration began, liberating the people of Belarus from the Nazi invaders. A significant part of the funds required were allocated from the Union State budget and this is only one fragment of the great work carried out by the Permanent Committee of the Union State in connection with the 70th anniversary of our Great Patriotic War Victory.

This year’s Slavianski Bazaar in Vitebsk traditional international festival is dedicated to the anniversary of the Victory. Meanwhile, not too long ago, journalists took a press-tour of the sites on which the fiercest fighting occurred, in Moscow area. The Union State Secretary, Grigory Rapota, spoke to all those setting off on the motor rally dedicated to Victory Day, as they left Poklonnaya Gora in Moscow (where the Russian Museum of the Great Patriotic War History is situated) to head to the German town of Torgau, where Soviet and American troops met 70 years ago.

Special attention and respect are paid to veterans of the Great Patriotic War, all of whom have been awarded commemorative medals. In Belarus, in accordance with the decree of the President, more than 44,000 veterans have received financial assistance (amounting to almost Br205bln). Local authorities check regularly on the condition of their housing and, whenever possible, help renovate their homes, as well as taking care of other household problems. Many veterans are invited each year to the ceremonial parade, held in Minsk on May 9th and attended by about 5,000 Belarusian military personnel, presenting about 250 units of military equipment. Alongside Belarusian soldiers parade Russian troops: about 300 from the Regional Group of Forces. Meanwhile, Russian Yak-130 combat training aircraft and Su-34 bombers fly overhead.

Moscow’s Red Square is also known for its magnificent military parade and the night skies not only of the capitals of Belarus and Russia but of many other cities across the Union State are emblazoned with colourful fireworks, marking the day of commemoration and celebration.

The preparation for the remarkable date began well before May 9, 2015. “Almost every our event in the current year is to a certain extend filled with the theme of the memory of heroic defenders of the Motherland and the valor deeds accomplished 70 years ago”, — Grigory Rapota stated at the meeting with journalists. There are many examples thereof. So, the bicycle race held annually under slogan “Youth of Russia and Belarus is the way to future of the Union State” has already become a tradition. This time the topic of victory in the Great Patriotic War has felt specially clear. Prior to the start by the Eternal Flame in Smolensk the race participants had been read the message of State Secretary of the Union State Grigory Rapota: “You will go along the same front roads that your fathers and grandfathers went along 70 years ago...”. During 7 days the boys and girls passed 700 kilometers across Smolensk, Bryansk, Mogilev, Vitebsk and Gomel area. Laying flowers at graves of the fallen heroes, honoring veterans will for many years remain in the memory of the young people. The bicycle race ended at the renewed Mount of Glory near Minsk.

One more tradition is the Memory Train that in the current year for the seventh time has brought from Kaliningrad to Minsk and then to Moscow 450 boys and girls having distinguished themselves in the search and military-investigation activities. Together with them 50 veterans took the honorable journey. In the capital of Belarus the passengers of the Train were met by peers to jointly lay flowers at the monuments of the fallen ones. This year the event has been dedicated to the 70th anniversary of the Great Victory.

The youth of Belarus and Russia has become the main character of many other events related to the remarkable date. On the eve of Victory Day student associations of universities of Belarus and Russia took part in voluntary patriotic event of student teams of the Union State held under slogan “Youth builds the Union”. The labor semester was grandly opened at the Eternal Flame in memorial complex “Brest Hero-Fortress”.

Approximately at the same time in Saint Petersburg at the Saint Petersburg city Palace of Youth Creativity the finals of contest of scientific and technical creativity of pupils of the Union State `XXI Century Talents` took place, where 23 teams from Belarus and Russia participated. This event was held under the auspices of the Standing Committee of the Union State. In honor of the 70th anniversary of the Great Victory the boys and girls laid flowers at the monument to the heroes-defenders of Leningrad.

Successfully passed the events of the Union State where famous people of arts, as well as young performers took place. One can name youth patriotic song competition under slogan “We do remember, we do take pride” and a number of concerts of the Belarusian-Russian youth orchestra. The Standing Committee of the Union State by all means supports this team the creative work of which is known both in Belarus and Russia, and abroad. The next concert was given by the young musicians on the Victory Day on the central square of Voronezh in the framework of celebrating the 70th anniversary of the end of the Great Patriotic War. Works of Belarusian and Russian composers, as well as world classics were played. And of course, the focus of the program was pieces on the war and the Great Victory.

The Standing Committee of the Union State hosted the meeting of representatives of the fund of memory of the Victory commanders. There attended heirs of the glory of Marshal Georgy Zhukov, Konstantin Rokossovsky and Ivan Konev. Deputy State Secretary of the Union State Ivan Bambiza emphasized the importance for our contemporaries to refer to the memory of the great military leaders. On the occasion of the 70th anniversary of the Great Victory State Secretary of the Union State Grigory Rapota addressed a message to the peoples of Belarus and Russia. In it, among other things, it was said: “Thanks to our heroes who gave their all for the Victory, we make plans for the future and can peacefully think of tomorrow... We bow to the courage and steadfastness of the heroic defenders of the Motherland!”
Заметили ошибку? Пожалуйста, выделите её и нажмите Ctrl+Enter