The weather favours the diligent

Heat! Now, nobody in Belarus is surprised at it reaching 35 Celsius degrees. This year’s August is very hot and we’ve adapted to the high temperature.

Heat! Now, nobody in Belarus is surprised at it reaching 35 Celsius degrees. This year’s August is very hot and we’ve adapted to the high temperature. Moreover, we do understand that dry August days are a blessing for grain growers. The harvest is ready and it should now be gathered quickly, without loss. Yes, some feel uncomfortable nowadays at the factory conveyor or even in the office, but everyone is ready to tolerate it, if the weather doesn’t change to rainy… In this case, harvesters would stop, ripe grain would become wet and the harvesting campaign would cease. 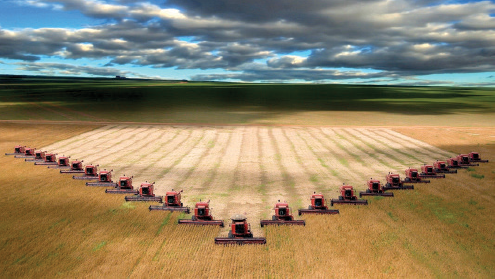 Each day of August feeds us for the whole year. Not only are villagers aware of this, but also those who live in the city, and they can’t be indifferent people when it refers to earning their daily bread.

Meanwhile, what is the political weather like? It’s also an important question. The weather is changing on the global scale: it’s sometimes hot and sometimes mild, yet in recent times, we’ve been seeing sharp cooling in some areas. Probably, the matter won’t become a ‘cold war’ if we speak about the big powers, but the feeling of confrontation and opposition is definitely present in the air.

Belarus doesn’t keep away from world political processes, though it primarily advocates its own national interests, which were specified at the traditional meeting between Alexander Lukashenko and Heads of the Belarusian diplomatic missions and consular establishments. Our Open View on the Changing World article is dedicated to this topic.

It’s now appropriate to cite the President’s opinion from this session. ‘We are witnessing sweeping changes in the global setting. We’ve faced totally new geopolitical conditions. Stability was shattered, not only somewhere far away, like in North Africa or the Middle East, but also very close to us. We have realised that situations can explode anywhere. We are witnessing the devaluation of standards and principles of international behaviour, the destruction of the international law system that has been shaped over decades. One thing is clear — they strike the weak and reckon with the strong. Therefore, we need to be strong politically, and in particular, economically’.

Our Diplomats Synchronise Watches and At the Level of Global Partnership materials supplement the foreign political topic in the magazine.

The geography of Belarusian foreign policy and foreign economic activity is vast, but the African continent continues to remain a white spot on the world map of our business interests. The task to strengthen this sector has become more urgent in recent times, with diplomats noting return interest of our African partners in the development of dialogue with Belarus. Mozambique is one such country and its Prime Minister, Alberto Vaquina, recently visited Minsk. This topic is further explored in our Geography Expands article.

As always, the August issue of the magazine does have its own topic, which, in my opinion, is no less acute for the country, as it covers and reflects the life of society. I would even specify that is opens up good tendencies which are peculiar to many citizens of contemporary Belarus. A healthy nation is a strong nation. It’s difficult to argue or contradict such an interrelation. In this respect, the topic of the issue ‘Health with the Sign of Quality’ seemed appropriate to us. Moreover, it was easy to disclose it, as there’re more than enough good examples.