The 2nd National Museums of Belarus Forum gathers over 400 participants in Gomel, in addition to 98 museums and 10 companies representing museum technologies

The 2nd National Museums of Belarus Forum gathers over 400 participants in Gomel, in addition to 98 museums and 10 companies representing museum technologies

The first historical-cultural biennale took place in 2012, in Grodno, and much artistic invention was anticipated from the Gomel event. Belarus’ Culture Minister, Boris Svetlov, believes that our museums are developing well. “Since 2012 the number of visitors to our museum complexes has more than doubled. We are well aware of foreign museum experiences and are actively implementing these in our country. Importantly, new museums are opening, including the privately run ones,” he says. 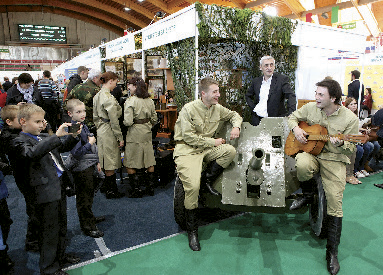 Last year, Belarusian museum staff organized 5,000 exhibitions and over 130,000 excursions, visited by almost 6 million people. Museum technologies have moved from reading information on stands to downloading guides onto iPhones and other mobile devices. Of course, small museums can hardly afford this, as an info-kiosk alone costs around $8,000. However, efforts are being made to solve obstacles, notes the General Director of the National Art Museum, Vladimir Prokoptsov. He explains, “European museums generate up to 60 percent of their profit from souvenir shops, art-cafes and children’s play rooms. We are moving along this path, aiming to ensure that whole families come to our museums, irrespective of age of members. Sadly, most Belarusian museums were built in Soviet times, when comfort was less appreciated, so money is now being spent on rebuilding premises.”

In 2013 the Nesvizh National Historical and Cultural Museum-Reserve enjoyed the most visitors, followed by Brest Hero-Fortress Memorial Complex.

Gomel’s Palace and Park Estate occupied the third place. Its General Director, Alexander Gostev, reveals the secret of attracting foreign tourists, saying, “Any business requires a target group. Most of our foreign guests are Russian, from Bryansk Region, Moscow and St. Petersburg. Apart from liaising with tourist companies, we advertise in spas and recreation centres. The results speak for themselves, as half of our visitors arrive from abroad.”

The forum also prepared a professionals’ rating, with the winners of the Museums of Belarus in the Third Millennium contest announced across six major and four special nominations. Galina Nechaeva, the Director of the Vetka Folk Art Museum, was acknowledged ‘Best Head’, while Oshmyany Local History Museum (named after F. Bogushevich) won ‘Best Art Design’. The Grand Prix went to the National Art Museum.