The philosophy of forest villages

The Kamenets District is known for the Belovezhskaya Pushcha National Park which occupies most of its territory.

The Kamenets District is known for the Belovezhskaya Pushcha National Park which occupies most of its territory. Moreover, it boasts the greatest number of agro-estates in the Brest Region — over 40, despite public access being restricted. As it’s a border zone, security is tight and limited to military personnel. 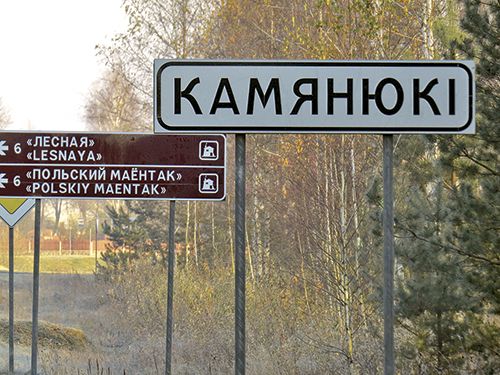 A village in Belovezhskaya Pushcha


Located at the crossroads of Belarus and Poland, the village of Kamenyuki, being the administrative centre of the National Park, attracts a large number of tourists. It’s not only Belarusians who visit the area: nature lovers of all nationalities come to enjoy the information centre, ancient woodland and wild animal zoo, as well as Father Frost’s estate. The forest reserve is an ideal place to visit and an even better spot for those lucky enough to reside in there.

Vasily Rebik, owner of fishermen’s cabins in the Domik Rybaka agro-estate greets me with his self-penned verse in admiration of the forest:

‘The disc of the sun goes down in the East
While the duck sits on the water.
The crane’s cry is heard
And aurochs walk in distance.
Beauty. Without cost.
A nightingale is singing in the bushes,
As if giving us a lesson in art.
A fish beats the water with its tail.
Mother-Nature lives,
Undisturbed by man.
And the cycle of life continues.’

We stand with Vasily on the bank of a small lake, which he dug himself. He tells us, “Water comes from a spring. I’ve stocked the lake with Carp, Grass Carp and Crucian Carp ready for fishermen. We were fully booked for the New Year holiday as early as last April.” 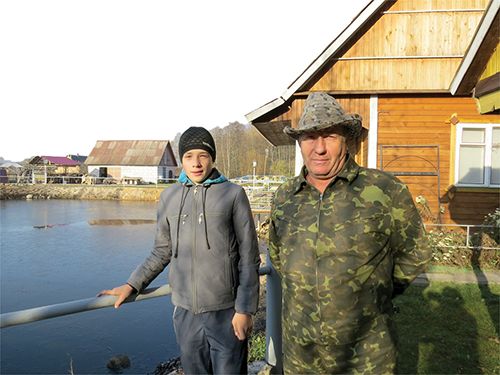 
Vasily Rebik isn’t a local pushcha resident. A former soldier, he was born in Bryansk, in Russia. Since 1972, he has lived in Kamenyuki but moved several years ago from his flat there to the house he built himself. For the past six years, he and his wife have been involved in agro-tourism.

Vasily shows us around everything he has made. I point out the line of fir trees in the yard, which are of various heights and ask him to explain. He describes how they have all been planted at different times to commemorate his grandchildren, the highest being 16 years old, which is the age of his eldest granddaughter Nastya; the smallest was planted on the birth of 4 year old Masha. Like many forest dwellers, he lives firmly in the present, in a practical way, but has a strong sense of the future and the legacy for his grandchildren.

Kamenyuki is a large village, with 1,071 residents. It boasts an impressive array of services including an ambulance station, kindergarten, school, bank, church, a culture and crafts centre, four shops and a gas station — a real agro-town. 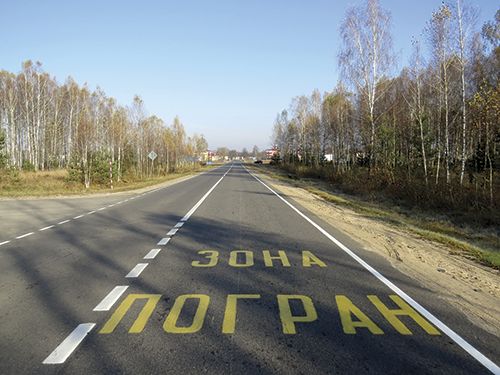 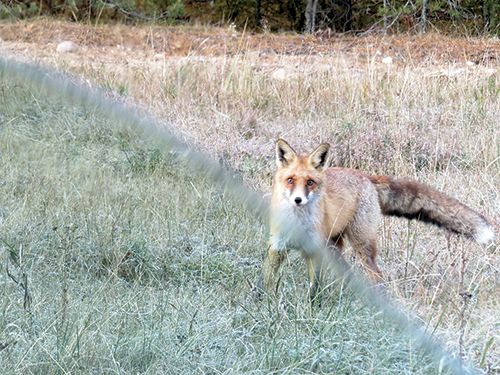 On the way to Kamenyuki, my path was crossed twice by foxes, one stopping long enough for a photo. Vasily says foxes are a common sight in the village as are wild boar and roe deer. A recent bold fox caused considerable nuisance by taking hens in broad daylight and even at night, finding access under houses and over fences to gain food. This particular creature was so wily it even managed to take the bait from traps without being caught. The animal was finally run to earth when it was discovered in a local shed and the National Park rangers tracked its route to a manhole under repair. The next time it returned to the shed, a net was waiting and the fox was captured. After the ‘thief’ had spent a suitable period of time in quarantine, it was given permanent residence in a large cage at the National Park open-air zoo.

Such stories are common in Kamenyuki. At present, a lynx is living in the wildlife park in a large enclosure, where there’s a small hole with a staircase which is used by a domestic cat that comes for a visit. A local farmer adoped the lynx as a kitten, raising it together with his own pet cat. Now, the lynx is too large for a domestic house, so it lives in a cage, with its feline friend visiting. 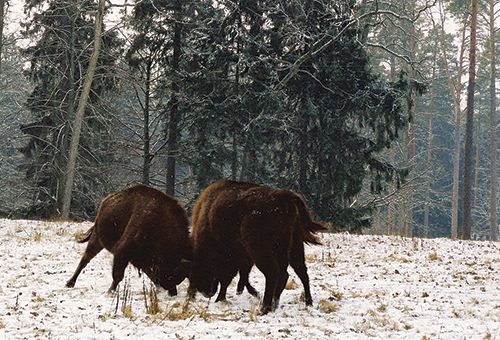 Natalia Diyachenko adopted her wolf Richi from the forest. I visited her often before her death to play with her wild hearted pet. In Kamenyuki, she is remembered with great fondness, for her affinity with wildlife. Wolf Richi was no older than a week when he came to the home of Natalia Diyachenko, a biological scientist, together with his sister from his lair (destroyed by hunters). Another three wolf cubs were sent to the Grodno area. Orphan wolf cubs are often hand-raised, in order to be put out for hunting when they are fully grown; luckily for Richi, he found a sympathetic home.

At first, Ms. Diyachenko was reluctant to take the cubs: being blind and motherless at such a young age makes them unlikely survivors. However, after seeing them peeping from the balcony of the game warden’s house for three days, she finally gave in and could save Richi by sitting over him constantly for three days and nights. Richi wasn’t the first wolf brought up by Ms. Diyachenko, as they had previously reared another, named Rem. 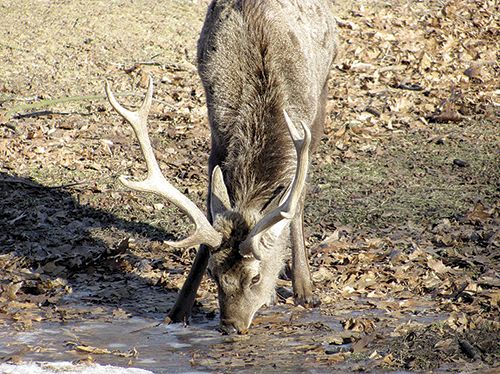 Initially, Richi lived with Ms. Diyachenko, her daughter Tatiana and their dog Jack in a two-roomed flat. As the wolf cub became older and more destructive, he was moved to the shed, where he made a comfortable den in an old sofa. Soon, even cows in the neighbouring barns stopped noticing the oddities of the new guest. He howls at the moon… Well, what of it? Dogs do this too!

Most of the residents of Kamenyuki village work in the Belovezhskaya Pushcha National Park — as foresters, tourist guides, cleaners, administrators and cooks. Everything in Kamenyuki is connected with the forest; employment, study and leisure. Children are taught about the forest from their earliest days. Eight years ago, at the initiative of school director Valentina Frolova, a children’s public organisation — Ecopolis — was set up, and the school soon obtained special ecological status. 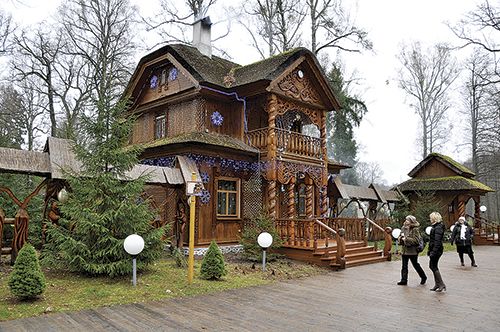 In 2011, a Culture and Crafts Centre opened in Pushchanskaya Street in Kamenyuki. The focus of the centre is the preservation and development of folk crafts. Irina Kushneruk — one of the most famous woodcarving masters in the Brest Region — became the director of the centre. In addition, she is the country’s only wood carving master to work with a chainsaw. Irina is full of new ideas so neither the schoolchildren nor craftsmen under her leadership have cause to become complacent. Her sculptures can be seen in the Father Frost estate in the Belovezhskaya Pushcha, where she carved a goat, a horse, a snowman, a rooster and a frog.

She came to the pushcha after completing her course at Bobruisk Artistic College; with her husband Vladimir, she built a house in the village and raised a son and daughter. Irina is multi-talented: as well as directing the centre, she produces fine oil paintings and her pictures on wood are true masterpieces, taking up to two months to complete, in meticulous detail. They are often commissioned as gifts for dignitaries and other important visitors. 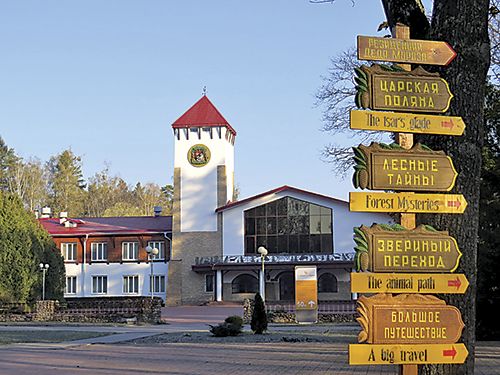 Irina’s husband is also a famous woodcarver, who shares his skills and experience with young carvers at the centre headed by Irina. Their daughter also stays in the village and works with her parents.

I ask local schoolchildren in the playground whether they would like to move to larger cities such as Brest, 60km away, or a closer one, Kamenets. They responded with a smile and a shrug of the shoulders. A big city with large shops might hold a certain attraction but the forest is a different thing entirely. The philosophy of the forest people and the rhythm of their lives ensure a slightly different view of the world, based on a sense of natural harmony. After spending time in the Belovezhskaya Pushcha, one understands how hectic our city lives can be, compared to the beauties of nature. Even a glance at the first ice on the Lesnaya River, mist on aspen branches and steam from the auroch’s powerful nostrils bring a feeling of serenity. It makes one want to stand and stare, to drink in the natural splendour of everything the forest has to offer. As our host Vasily points out in his verse, beauty and wisdom are free. I feel the residents of Kamenyuki are lucky indeed.