The past in pictures 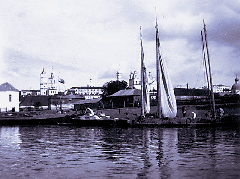 There are a town hall, cupolas of the church, and dandies in toppers on the front of the Dnieper. Today’s citizens haven’t seen the Mogilev of the 18-19th centuries yet, drawn by Polish painter, Yuzef Peshka, and Russian architect, Nikolay Lvov. “In these pictures you can see familiar places, get to know how people dressed formerly and the fact that there was already a river police service in the city two centuries ago,” says Alexey Batyukov, Director of the History Museum.

A local businessman helped to bring about the idea of creating an album with age-old reproductions. “The fact is that these pictures of ancient Mogilev have only been found abroad — in libraries and museums of Russia, Ukraine and Poland. We needed a lot of money to get hold of the original ‘soft’ copies,” says Batyukov.

Historians think that there are views of Mogilev also on the ‘Birth of the Mother of God’ icon made in 1649 by Piotr Yevseevich. The inscription at the bottom also specifies the place of residence of the foreman, the Golynets settlement by Mogilev. Buildings in the background are thought to be a part of landscapes of the city. Vasily Voshchanka, Mogilev’s print worker, has also captured the capital of the province on his engravings from the 18th century.

Workers at the museum have promised that there will be a lot of surprises for lovers of the history of the city, as each picture will be accompanied by a detailed story about both the picture and the period of Mogilev’s life that is showed there. The authors hope that the album will be interesting for experts and for residents of Mogilev.