The most important is to keep healthy

More than one hundred seventy thousand foreigners got medical aid in Belarus in 2015.

And this figure continues to increase. In summer people come to us not only to have a rest, but also to undergo treatment, because modern medicine in Belarus is a combination of advanced technologies and long-time national traditions of treatment and health improvement. Zsuzsanna Jakab, Director of the WHO Regional Office for Europe, added that Belarus boasted the world’s greatest level of children immunisation, at 99 percent, and that other European regions should follow its example. Notably, no cases of child mortality were reported last year. Ms. Jakab also noted Belarus’ success in fighting HIV, tuberculosis, and oncological and cardiological diseases. Belarus is the first country worldwide to have been visited by a UN inter-institutional group.

Contemporary medicine embraces a range of holistic and alternative treatments and therapies, from genetic testing, Voll diagnostics, self-massage and speleo (cave) treatments to chronotherapy, and those involving leeches and hot stones.  Craniosacral therapy and osteopathy are popular too.

Most Belarusian medical centres offer a wide range of modern services, as do beauty salons. In my block of flats, for instance, there’s a hairdressing salon offering cedar barrel relaxation treatments. Our predecessors believed that evil spirits were behind our ailments, so would wear amulets to frighten off the demons. Before Christianity, inanimate objects were thought to each contain their own divinity, leading to the worship of stones and trees. People would beseech help in recove­ring from maladies, including from the well-known Mara Goddess fieldstone (now held by the Belarusian Medical History Museum in Minsk). The goddess Mara, being thought to especially help women, still has a following among women of today, who like to visit the stone.

In the past, people would charm away diseases and use healing herbs, and herbalists and healers continue to operate across Belarus. One such is herbalist Sofia, who lives in Volkovysk District of Grodno Region. She knows more than 300 plant species and helps all who address her for advice. Calendula is a useful flower

Minsk doctor Valery Molostov, who has written more than ten books on biology and sociology, acupuncture, massage, and back problems, is known to have visited a herbalist in a village upon finding it impossible to cure his own sore finger. Miraculously, he began to heal following her non-traditional treatment: she lit a candle, prayed and wrapped his finger in red cloth.

Many of today’s medical innovations have their roots in 16th century Renaissance times. Spectacle-maker Zacharias Janssen invented the microscope, which allows us to study cell structure and gave birth to microbiology. Renowned physicists Luigi Galvani and Alessandro Volta came up with the electrotherapy methods still in use today. Electricity is used in all manner of medical interventions, from defibrillation and electrophoresis, to Voll diagnostics.

Minsk has long had hospitals and houses caring for the homeless and elderly. Its first pharmacy opened in 1659, with the second only following 123 years later. Minsk’s pharmacies rivaled those in Europe, and its number of educated physicians grew steadily. One such was our first printer and public figure, scholar and philosopher Francisk Skorina.

Interestingly, physicians would often only diagnose, leaving barbers to perform practical tasks, as they would cut hair. The removal of teeth and amputation of limbs would often fall to barbers, alongside the conducting of caesarian operations and plastic surgery.

By the 18th century, doulas and quacks were being trained at specialised schools, the difference between folk and official medicine gradually disappearing.  Early in the 20th century, a territorial hospital opened in Minsk (housing until recently the 2nd Municipal Clinical Hospital); it was the oldest of Minsk’s operational medical institutions (having first opened in 1799).

Ivan Zdanovich was the first chief physician of the territorial hospital, dubbed ‘a doctor of kindness’, as he invested his own savings into the purchase of medical equipment. To raise money in Minsk, there were ‘white flower days’; daisies and lilies were sold on every corner, to help pay to build dispensaries and to treat tuberculosis patients. Herb doctor Sophia will help everybody who addresses her

The last century’s technical progress positively influenced Belarusian medicine, triggering its robust development. X-ray radiology emerged, and scientists invented devices to examine the performance of all human organs and systems. Ultrasound scanning allowed pregnant women to learn the sex of their babies and see the shape of the fetus.

Of course, every home can now afford its own blood pressure monitor, thermometer and inhalation device, while massaging devices, air humidifiers, ice chambers and infrared saunas are ever more popular.

The biggest transformation has arrived with genetic technologies.

Prevention Instead of Treatment

As we know, prevention is better than cure and current genetic knowledge takes this principle to a new level. In Minsk, tests for genetic defects are taking place at the Human Genetics Laboratory, of the Genome Technologies Centre of the Belarusian Academy of Science’s Genetics and Cytology Institute. It is the CIS’ only such authorised centre, its lab annually taking part in inter-laboratory verification of genotyping results, conducted by the Reference Institute for Bio-analytics, headquartered in Bonn. Every year, the lab is awarded certificates confirming the correctness of its approach.

What is genotyping?  Irma Mosse, who heads the lab, says that the most popular tests are those for cardiovascular and endocrine diseases, osteoporosis and premature delivery. Health problems are not the only reason why Belarusians use the centre. Tests can reveal whether a person’s genes affect their physical tolerance or ‘talents’. All of our national sports teams undergo genotyping. Results help, for instance, in testing ability to withstand exercise at high altitudes. Those with lower ability can travel earlier, to give their body time to adjust. Psycho-emotional characteristics can also be mea­sured, such as stress tolerance, helping optimise drug dosage. Irma Mosse notes that some people require fifteen times the volume of a drug in order for it to take effect. She tells us that about fifty medicines may not be prescribed without tolerance testing, since inappropriate dosage can be fatal.

The Institute’s sequenator device is being used to ­examine every human gene, with most tests being requested by medical professionals before conducting vital surgery. Belarusians are increasingly eager to gain a personal genetic passport, especially those having trouble concei­ving. Treatment based on results has seen an 80 percent success rate in women carrying babies to term. Irma re­collects one mother having a genetic passport made for her six-month old baby girl, wishing to guard her daughter’s health from infancy.

Recently, American Prof. Leroy Hood, of the Institute for Systems Biology, who is known for his DNA structure research, introduced 4P medicine (Predictive, Preventive, Personalised and Participatory). The aim is to improve our quality of life and increase longevity by ten or twenty years.

‘Predictive’ implies that we can pre-identify potential defects in a healthy organism through genetic testing. ‘Preventive’ means using a proactive approach to identified effects. ‘Personalisation’ implies tailored treatments taking into account a genetic passport. ‘Participation’ requires that a patient should be involved in their treatment.

Thousands of years ago, Tibetan medicine treated the body holistically, looking not at individual organs but at its whole. Ayurveda, the ancient science of healthy and long life, appeared in India more than 5,000 years ago, with its followers ever growing in number. Ayurveda suggests that the unity of the body, senses and motion, of mind and soul, is vital to good health.

Chinese medicine also views human health holistically, from four positions: psyche, emotions, the meridional system, and physical cover. Our western model re­cognises only the psyche and body. According to Chinese physicians, disease begins in the mind, followed by negative emotions, acting according to the ‘thought generates desire’ principle. This distracts from the natural flow of energy that moves within our organism, according to a specific pattern. We lose vital energy and, consequently, fall ill. The Chinese cure the person, not the disease. Of course, physicians who could not prevent the Emperor from falling ill would be removed from court. According to researchers, medics will have learned how to ‘repair’ mutated genes by 2017, being able to restore damaged DNA and remove redundant genes. It sounds fantastic! Back in the 20th century, genetic engineer Bruce Lipton told the scientific community that the power of thought could change DNA coding, thus curing any disease. He confirmed Leroy Hood’s theory that a cell can be influenced externally, through sheer belief. Similarly, hypnosis can reprogramme the unconscious and bridge gaps left by psychological wounds, inflicted as a child or by negative life experience. Bruce Lipton says that the placebo effect has been known for thousands of years, but we must have faith in order for it to work.

Acupuncture is another treatment regaining popularity in recent decades. In the mid-20th century, German dentist Reinhold Voll created a device resembling a galvanometer and employed his acupuncture knowledge to diagnose cases. Small electrical currents were run through points on the hands and feet. Data was then collected for early pathological identification.

Quick and painless, without contraindications, the treatment is popular in more than 30 countries. To interpret results correctly requires great expertise. Acupuncture is an ancient alternative medicine, like homeopathy, while reflexologists and homeopathists often use electroacupuncture (according to Voll). Minsk has several practitioners, while most homeopathic pharmacies and state polyclinics have physicians able to tailor medicines in the form of drops or rolls.

Recently, I ran across a book by Nikolay Ignatenko, from Minsk, called Self-Massage. The author states that we all have the power to influence our organs and heal ourselves, using ancient Slavic massage techniques, which work upon the stomach lining. Massaging the belly, by pressing or tapping, causes a ‘response’ from inner organs, and improves blood circulation, encouraging recovery. The author cites examples of people who, through self-massage, cured spinal disc herniation and infertility. It sounds incredible! At the Belarusian Medical History Museum

At the Belarusian Medical History Museum, I’m ­looking at cutting tools once used for surgery. It’s clear how far we’ve come. Belarusian medical centres and hospitals are equipped with up-to-date facilities that meet modern European standards. However, all our achievements are built on the work of past giants.

Academician and neurosurgeon Arnold Smeyanovich passed away recently, aged 75. He worked until his final days, saving lives through surgery. I recall reading an interview in which a man, aged 20, visited the great surgeon, to thank the doctor for having saved his life when he was just 3 years old, from brain cancer.

The entire history of Belarusian medicine fits into just two museum halls. Perhaps, another will open to display exhibits yet to be invented, in 3D format. Maybe, a room will be occupied by a single exhibit: an image of a human hand as a unique tool. Who knows, maybe in one or two hundred years, doctors will treat patients without needing to touch them… 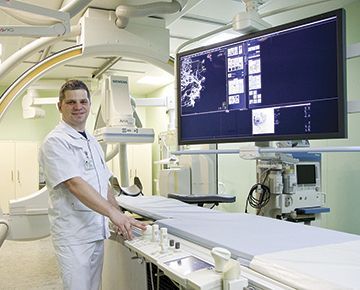