Writers of Belarus and Russia work together on new joint projects

The bridge of friendship — is a book

Writers of Belarus and Russia work together on new joint projects


In both Belarus and Russia, September is marked by the symbol of a book. The authoritative forum — the Day of the Belarusian Written Language — was held in the ancient town of Shchuchin in Grodno Region during the first weekend of autumn. It was the tenth time it has been held, and a large delegation of Russian writers, publishers and journalists attended the festival. They take part in the Consonance ‘round table’ meeting during which new Russian-Belarusian projects are discussed. 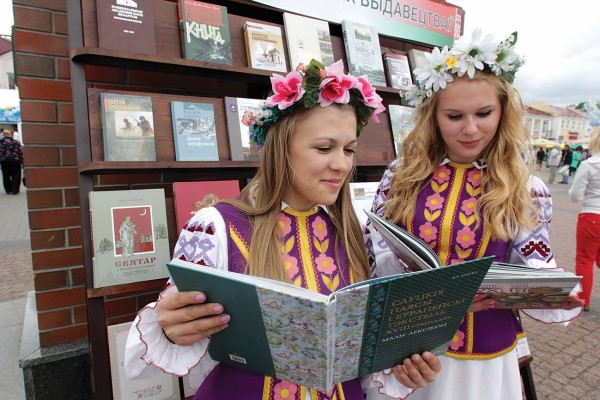 “During the ‘round table’ we discussed a wide range of problems: the issue of thick magazines and the place of literature in society,” Yuri Kozlov, Editor-in-chief of Roman-newspaper explained. “I spoke about the idea of a collection of modern Belarusian prose in Roman-newspaper. The idea was well received and several authors have already expressed their interest. If the project takes place, it will be useful both for Belarus, and for Russian readers. Events similar to the Day of Belarusian Writing, give hope that both Belarus and Russia will remain the most well read countries.”

Another Russian visitor, Georgy Pryakhin, the Director of the Khudozhestvennaya Literatura Publishing House, commented that most of all he liked the nature of the discussion. “It was not snobbish or showy, but sincere and serious conversation about co-operation. I have brought the whole library of books from the Khudozhestvennaya Literatura Publishing House to Belarus. I also put forward the initiative to issue a literary miscellany with the best works of all the participants on the 10th anniversary of our forum. The great Russian literature has Belarusian roots. To recollect Dostoevsky and even Gorky... Alexey Karlyukevich, the Director of the Zvyazda Publishing House, and I want to prepare a book about Russian writers connected with Belarus.”

It is a well-known truth that literature is a spiritual bridge between cultures. The international literary competition of young Belarusian and Russian writers of the Union State is called the Bridge of Friendship. Its laureates can see their works in the Literary Almanac, which is published with the support of the Standing Committee of the Union State. Works are included in both the original and in translation. “Not every country can be proud of having such a significant body of literature. Russia and Belarus have it. I would like to encourage the young authors of this collection not to give up their creative efforts, to go forward, to believe in themselves,” this is how the State Secretary of the Union State, Grigory Rapota, completed his preface to the literary miscellany. The book containing the works of the winners of the competition Bridge of Friendship was displayed at one of stands on the Day of Belarusian Writing. While the festival in Shchuchin has gradually led to another book event, the Moscow international book fair, where Belarusians were already welcome guests. They never leave the exhibition without gifts and awards. This time, Belarusian publishers received the Grand Prix for the wonderful volume Castle Belarus and several diplomas in other categories.

While numerous visitors were examining stands rich with the literary novelties of the Moscow exhibition, the discussion Belarus-Russia: A General View of the Future was continuing in the Business and cultural complex of Belarus` embassy in Moscow. For more than two hours well-known writers, publishers, diplomats and heads of media holdings of both countries held talks. “Together with our Russian colleagues, we have already implemented many publishing projects,” noted Lilia Ananich, the Minister of Information of Belarus. “But today it would not be right to speak only about a book. It is very important that the history of Belarus and Russia stands behind all this. Historical roots feed today`s strategic partnership, our Union State is developing dynamically and has become an example for other integration processes in the CIS.”