Nowadays, the attitude towards trades is rapidly changing. We shall take, for example, the electric welder. Ten years ago, his appearance was associated with a man in oiled overalls, who hides his face behind a metal mask. He had, as a rule, a lot of dirty work that was done by hand. However, a welder at Novopolotsk enterprise Neftezavodmash, Andrey Kozlovsky, doesn’t fit this description. He is young and handsome in his new, clean overalls. With his modern equipment contained in what looks like a manager’s case. Probably, a welder, who is the best welder worldwide, should look just so. Kozlovsky won the world contest of professional skills in the national team of Belarus in Beijing. Andrey confesses that his many skills, which he demonstrated in China, he received in the training department of his native enterprise, whose main activity is the assembly of technological equipment at Novopolotsk Naftan Oil Refinery.


Kozlovsky was not yet 20 when he came to Neftezavodmontazh. Over the last 11 years, he has learned a lot. He began, as all newcomers do, at the training station of the enterprise — with cabins, equipped outdoors. There, they could practice with various scrap pieces of iron. If you damaged something, it wasn’t important. Then after time, Andrey learned to weld so perfectly that he was involved in the assembly of one of the most unique instalments of Naftan — the AVT-6. At the bottom, it’s a metal vessel, 40 metres in height, where various chemical processes occur under pressure. Kozlovsky remembers that he had to work in the highest part of the instalment, “They were extreme conditions! You had to shimmy down through a half-metre diameter hatch with all your equipment and you had to weld perfectly, without any defects.”

It’s no surprise that, after such a practical preparation Andrey has taken the 4th and the 6th places in the individual event in world contests of professional skills in Odessa and Beijing. “A contest begins with fifty theoretical questions. Then the practical part starts, during which you have to weld two metal pipes and two spools. The main thing is quality, although any contest seems to be an easy and pleasant walk to me, after every-day work under extreme conditions.”

In these latter days, they reduce the use of hand work at Neftezavodmontazh. For example, welders assemble huge tanks with volumes of 50,000 cubic metres from metal sheets with the help of automatic American apparatus. The welders sit in two chairs that go along the welding seam inside and outside of the vast tanks. They weld one and the same seam from both sides at once. When the chairs move, they choreograph their actions by walkie-talkie, so as to not burn each other. In Belarus there are 2-3 such instruments and they are in high demand. Novopolotsk welders, together with the equipment, are invited to perform difficult jobs at the other Belarusian oil refinery in Mozyr. Recently, they have worked also at an oil refinery in the Leningrad Region of Russia.

Science on guard of quality


A high-class specialist can define if a welded seam is well done, with their naked eye. But as welders of 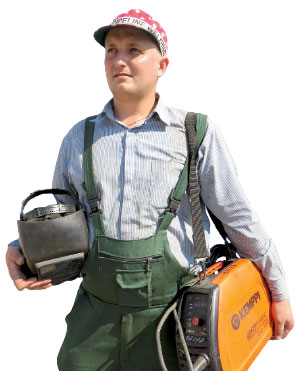 Neftezavodmontazh work at enterprises of the petrochemical complex, just visual proof of the quality of their work is not enough. Steelworks, pipelines and capacities of various diameters, which are assembled and installed by the welders, work under huge pressure and they often contain poisons or explosives. On the one hand, to guarantee the quality and take responsibility for the done work, a welder puts a personal stamp near his seam. So they can always say, who, where and what has founded. On the other hand, the laboratory of Neftezavodmontazh follows the quality of the work of the welders to avoid accidents. The production engineer, Lyubov Tankovid, who works there, explained that, as it happens, not any type of steel can be welded with another: “If a welder has taken the wrong steel or the wrong electrode, everything will fall apart! To avoid it, a device for determining of the grade of steel is used, along with a ‘steeloscope’. It’s a small device, which looks like a gun. You press the trigger and see, how much molybdenum, nickel, iron, manganese, chromium, and titanium the specimen contains.”

There is the whole science of physical metallurgy. To be familiar with the last scientific trends, Neftezavodmontazh co-operates with physicists and chemists of Polotsk State University, the Belarusian National Technological University. But the main thing is practice. They cut out a part of a weld to define the quality of it in practice. Then they bring the part to the laboratory, where they study it under a microscope, place it in ultrasonic waves and examine it with X-rays and gamma rays. If it has inside defects, cavities or splits, according to the words of the Head of the Welding Laboratory, Viktor Strinadko, they won’t escape the sharp eyes of his wards, “Currently, a plant on coke making is being constructed at Naftan. The project has been designed by Spanish engineers. They control the quality. Recently, together with the Spaniards, we have checked welds, conducted by our welders. We have performed their mechanical testing: with the help of special units we have broken, bent and cut the welding seams. We have even frozen them in a special freezer. The testing has been successful and no defects have been discovered.”

The welding laboratory of Neftezavodmontazh has a special accreditation, which allows it to perform testing for foreign enterprises. Partners from Russia and Ukraine have used it more than once.


Neftezavodmontazh appeared in 1959. It was created for the construction of Naftan, and the best specialists from the whole of the Soviet Union were invited. Its workers and engineers built plants and factories in the Perm, Norilsk, Grodno, Mordovia and Kemerovo Regions. They have worked in Cuba, Nigeria, Ethiopia, and Algeria. And how does Neftezavodmontazh prepare personnel today? Can they really train up a high-class welder from the man in the street? I addressed these questions to Alexander Yalovik, the Director General of Neftezavodmontazh OJSC. “Certainly, we hire young guys from Novopolotsk lyceum of builders. But, probably, it’s easier for us to prepare personnel in our own training point. Even if a man without any specialty comes to us, we employ him as a shift man. And we recommend that he prepare in his own time. In 2-3 months he sits a qualification exam. If he makes it successfully — he gets one of 35 trades. The most popular of them are a rigger, a welder, a cutter, a metalworker on assembling of steel constructions, and a metalworker on assembling of pipelines. And then everything depends on his wish to perfect himself. You can pass retraining and get a related profession all from his training station.”

Getting in a team of professionals, just as half a century ago, requires young guys who aspire to advance their skills. Otherwise, tomorrow other people will come to take their place — those, who do their work better. A positive image, gained over the decades, is important and Neftezavodmontazh doesn’t want to lose it. Currently, the enterprise, with 1,300 people working at it, is modernising Naftan — one of the biggest oil refineries in Europe. It is using the newest building technologies and units and has sent its specialists to study in Germany. Today, the Novopolotsk’s welders and other specialists are working not only in Belarus. They are working in Russian cities like Tuapse, Nizhny Novgorod and Novokuibyshevsk. By intergovernmental agreements, they are constructing a mining and processing works in the Turkmen Garlyk settlement. Perhaps, they will also participate in the construction of a big ‘South Stream’ gas pipeline, which will connect Russia with Western Europe and go on into the territory of Bulgaria, Serbia, Hungary, Slovenia, and Italy.