Two rare Florence Nightingale medals were exhibited at the Gomel Regional Museum of Military Glory. Such awards are not present in other museum collections of the country.

Two rare Florence Nightingale medals were exhibited at the Gomel Regional Museum of Military Glory. Such awards are not present in other museum collections of the country. 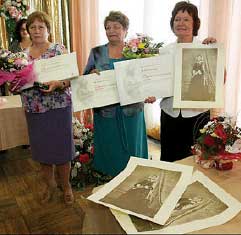 This international award was founded in 1912 by the League of the Red Cross and the Red Crescent in honour of English nurse, Florence Nightingale. During the 1854 Crimean War, the Englishwoman rescued thousands of lives in field hospitals. The medal was initially restricted to female nurses until regulation changes that were made in 1991. Under the new regulations, it is open to both women and men. However, it is still considered, by many, to be a female award.

This prestigious, silver and gold medal, has a phrase, written in Latin — ‘True and loving humanitarianism — a lasting general propriety’, and Belarus has seen more than its fair share of true humanitarians.

For feats during the Great Patriotic War, six Belarusian nurses were awarded the Florence Nightingale medal: Zinaida Tusnolobova-Marchenko (Hero of the Soviet Union), Sofia Golukhova, Yevgeny Shevchenko, Yekaterina Sirenko, Sofia Kuntsevich and Maria Garachuk. The medals of Sofia Golukhova and Maria Garachuk were given by relatives for the museum‘s exposition.

The Director of the Gomel Regional Museum of Military Glory, Pavel Zhdanovich, explained, “These are awards of real heroines who went through the war equally with the men. According to the memoirs of Maria Garachuk, during the first days of war, she took 146 soldiers from the battlefield and rendered them aid, was twice wounded and injured, but being a field marshal she worked through the whole of the war.”

Sofia Golukhova was called up to the Red Army in June, 1941. In 1942 in a battle near Belyi in the Kalininsk (nowadays Tver) Region, she brought back over 40 wounded people, but received a terrible wound. Both these women continued to work in medicine, helping people, after the war. 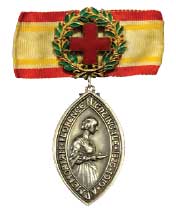 During peace time, Belarusian Sisters of Charity were awarded five more Florence Nightingale medals for their daily feats. In 2009, Nina Bliznyuk received it and in 2011, Sister of Charity from the Mogilev Region, Lyudmila Lelikova. In the summer of 2013, Mozyr resident Olga Geitseva, Brest resident Tamara Tereshina and Minsk resident Izolda Semushina entered top-thirty of the best Sisters of Charity of the planet. All of them have devoted their life to the care of people.

Mozyr resident, Olga Geitseva has been working as a nurse for more than 40 years. During these many years, she has trained more than 200 nursing volunteers, teaching them how to render assistance to bed-ridden patients. According to her, the necessity to help is a ‘drug for the soul’, “Today I have 9 lonely pensioners, and all are invalids of group I and II. Every day I go round and visit them. Sisters of Charity of the Red Cross are not only social, but also medical workers. Therefore, we take medicines together, dress wounds and give injections; all that the doctor has prescribed. The care of others is already rhythm of life.”