A map of gastronomic tourism has appeared in Belarus

Tasty points on the map

Belarus has long been renowned as an enormous food market uniting a multiplicity of small but original `restaurants’ offering various examples of regional cuisine under one roof. There are so many of these recipes that one could certainly fill more than one recipe book. If we are currently unaware of our national culinary ‘landmarks’, the situation will soon be remedied, as a map of gastronomic tourism will be published, which will show places (agro-estates in particular) where it will be possible to try authentic national dishes. Undoubtedly, one ‘must visit’ destination on this map will be Grodno`s Odelsk Region, with its ‘delicacies’ which have come under state protection as examples of our national heritage. Regina Frantsevna Solovich, a self-taught leading rural chef, makes dishes that have long been an obligatory part of any local holiday. Regina had put her cast-iron pot onto the stove an hour and a half before our visit and was determined to feed her visitors after their journey. We were taken aback by her hospitality: we had certainly planned to prepare Odelsk delicacies with her help but expected to have to make them ourselves.

“It’s as easy as pie, you don’t even need to be shown,” said Regina. She listed the ingredients and was happy to share the recipe for potato kishka which can be both an accompaniment, and a stand-alone dish, known as ‘Strava’ in the Belarusian language. It is made by adding cream and lard to grated potatoes. Then fill a pork sausage skin two thirds full and pierce in several places so that the `sausage` does not explode in the oven. The chef reveals she has her own special grater, made by herself. She also advises that plenty lard is used in the mixture.

Regina Frantsevna, what about salt and pepper?

“Just a little bit, especially if the lard is salted, it is a local Odelsk feature.”

Last autumn saw a large potato crop. The potatoes in Regina Frantsevna’s cellar are first-class — large and strong. In Odelsk, different variations of potato were used as a daily dish, the local women know a huge range of recipes. “We make `Pyzy`, oblong flat cakes from mashed potato with minced meat inside. So many people came to me to get the recipe for my kopytse: journalists, cooks from the capital`s restaurants and many others! I boil the potato whole, then I peel it and mash it with the help of a meat grinder. I add pepper, salt, starch and one or two eggs. I form the kopytse and put it into boiling water. Then I prepare a gravy: I fry dried mushrooms, onions, meat or sausage.” 
The traditional table usually includes cold cuts of meat. It’s also common to serve a dish of assorted sausages, Medovaya or Prazdnichnaya sausage and some salami as well as the essential home-made fillet sausage, ham and gammon. Salted meat products and smoked foods hang in the expected place under the ceiling of Madame Solovich’s house. While it`s not a problem for me to touch them, tiny Regina Frantsevna has to climb up on a stool.

Many people prefer to buy their products in the nearest hypermarket whenever they need anything. In the villages many culinary delicacies are prepared beforehand. For example, home-made fillet sausage was prepared in the following way. “For several days, the meat was marinated in brine,” explains Gelena Zverzhevich, Head of the Odelsk culture and creativity centre.  “About half a kilo of salt and one spoon of sugar was put into three litres of water. Or one hundred grammes of vodka, according to personal preference. Sometimes people salted it by rolling home-made fillet sausage in a mix of salt and sugar in the ratio 5 to 1 and it was left for two-three days. The sausage was filled with chopped meat, not minced. Before hanging it `under the ceiling`, the sausage was lowered into salted boiled water with a bay leaf for a couple of seconds. Caraway, coriander and dill were added. Caraway was picked up in the marshes. While garlic now happily grows almost everywhere.”

In order to add the Odelsk colouring to the meat, it needs to be smoked a little. The original smoker was a barrel dug into the ground, and in this Grodno agro-town it is the equipment of rural life that is used such as a shed, garage or bath. “As for firewood for smoking, the best is from deciduous trees, unless it’s a cherry tree. Like pine, it has resin,” the older residents say. “In this district people prefer hot smoking where the fat drips. When the stove has cooled down, the meat is left there to mature and it takes another 24 hours. The tastiest part is flank, streaky lard.”

In western Europe people have special affection for turkey, while in the west of Belarus it’s goose. It is put on the table directly from the oven, filled with apples. “Poultry becomes especially juicy if it is baked in a cooking bag. But why goose especially? Once, there were 14 mills in this area, and residents of Odelsk traditionally settled their accounts with the millers in geese, which had been fed with grain and oilcake,” Gelena Zverzhevich explains. We also thank the Odelsk millers for their stocks of high-quality flour which have ensured that the bread here is so amazing. Even at the beginning of the 21st century, when windmills are only restored for tourists, people continue to value Odelsk bread. The hands of our three ladies, Regina Solovich, Maria Iodel and Gelena Zverzhevich are now in dough up to their elbows. The process (accompanied by never-ending flashes of the camera) is in full swing. Special fermenting adds the taste to local bread, and it can’t be made without potato. Among other important ingredients are bread kvass and caraway. “In the past, when we had our own grain, the bread was especially well risen. Now, it does not rise much, so people add yeast. The main thing is to know when to stop. If the dough was thick, the bread becomes dry, if it was watery, the bread spread. Grain loaves were baked on cabbage and horse-radish leaves.”

For the half day that we spent in Regina Solovich’s home, it became clear that Odelsk cuisine is not only a mix of ingredients, but also a set of certain rituals thanks to which they become not only delicacies, but sacred food for the stomach and the soul. “Many years ago, it was thought necessary to breathe life into bread. People drew a cross on the kneaded dough, and each loaf, after it was taken from the oven, was rubbed with sweet water using a goose feather.”

Since ancient times, Napoleon cake and Viennese pies in Odelsk were replaced by lomantsy with poppy seeds and honey, original ring-shaped rolls, doughnuts and different poppy seeds rolled cakes. “It is a pity that it is now difficult to find poppy seeds,” Maria Iodel complains. “It was considered, the more poppy seeds, the more happiness. In our village people even added boiled pearl barley, it is the main dish for a Catholic festival. As well as boiled rice with raisins and honey for Orthodox Christians.” 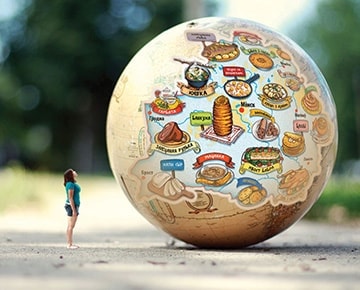