The Exhibition of Arms, Military Equipment and Ammunition — Russian Arms Expo — has been organised since 1999, in the suburbs of Nizhny Tagil. Its 10th event was held in mid-September. 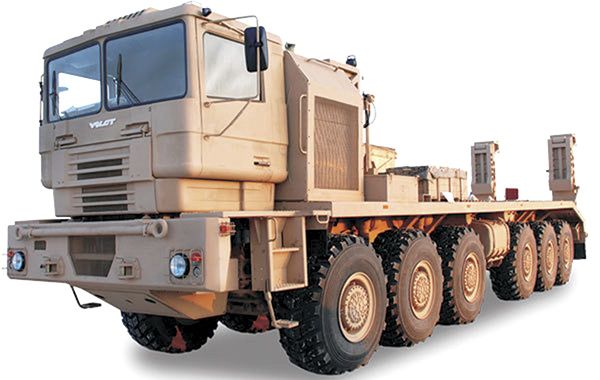 The international forum has, since 2013, attracted leading military-industrial companies from Western Europe. This year, former participants chose not to attend, due to sanctions, but the Republic of Belarus was represented convincingly.

Staratel training ground hosts the event, allowing battle scenarios to be recreated before spectators, showing the application of most types of weaponry. Its complex track can be used to demonstrate automobiles (including those using ‘caterpillar tracks’) in action. Trucks and tractor trucks made by Minsk Wheeled Tractor Plant (MZKT) appeared as true ‘kings’.

The whole new range of MZKT wheeled vehicles was on show — known worldwide under the VOLAT trademark (meaning ‘strongman’). They are truly powerful. All mobile Soviet and Russian strategic and short-range missiles use a MZKT chassis. At present, the enterprise’s designers are focusing on enhancing vehicles’ speed, as well as the comfort of drivers and crew.

A four-by-four MZKT-500200 truck aroused special interest. It premiered recently at the Masters of Artillery Fire-2015 international competition, held in   Saratov Region, featuring a Belarusian team, and was widely admired for its evident advantages: good dynamics, off-road capacity and smoothness of movement. Meanwhile, the military from Russia and foreign countries were most impressed by its ability to navigate potholes and off-road conditions. The MZKT-500200 confidently overcame the most difficult of obstacles.

Nizhny Tagil also unveiled the new MZKT-600201, with its heavy chassis, 8x8 wheel arrangement, and independent suspension of all wheels. A powerful vehicle can be used as a basis for artillery and missile troops, as an ammunition vehicle and as a tractor truck. It’s also able to work under most difficult conditions.

Interest towards MZKT machinery at RAE-2015 was apparent. Despite NATO sanctions, high-ranking military delegations from leading states across the Middle East, Africa and Latin America arrived in Nizhny Tagil, including delegations headed by heads of general headquarters and defence ministers. Most entered MZKT’s negotiating room and, although no new contracts have yet been signed, foundations have been laid.

Negotiations were also held with Russian partners of the Minsk factory. The MZKT leadership shared its latest news: of its development of a new chassis for the Russian Iskander tactical missile system, which allows for even smoother movement, improved dynamics and automatic gearshift.

In the future, all VOLAT chassis will boast independent suspension and automatic gearshifts, developed by the company domestically.