Is it possible to have a system where doctors already knew the information about a patient without even having opened the door of the apartment where he or she lives?

First aid should be primarily fast, it is not only about ambulances manoeuvring through the city traffic jams and searching for the necessary house. Is it possible to have a system where doctors already knew the information about a patient without even having opened the door of the apartment where he or she lives? In Pinsk a scheme for this has been developed using popular technological devices. 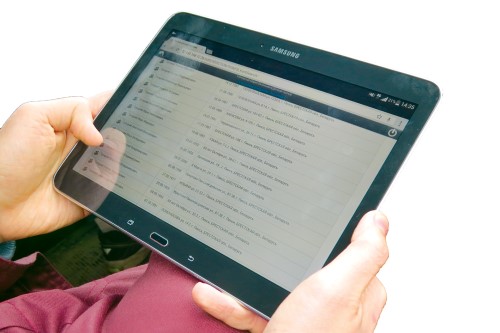 During the daytime, the traffic is slow in the city centre. Even the width of Pervomaiskaya Street cannot cope with the volume of cars. On approach to the traditional jam near the railroad crossing, it seems at first that we will not move an inch, but closer to the railway tracks other cars begin to move to the right, and our ambulance slowly makes it to the centre of the city. We hasten to Kirov Square from where the call was made. An elderly Pinsk resident is complaining of arrhythmia, speed is of the essence.

The young doctor Valentin Trotsky sits on the front seat. It is his second year working with the emergency team. On the way to the patient he communicated constantly with his colleagues, a medical assistant and a driver, now his attention is concentrated on his electronic tablet. The young physician takes it when we are in a jam and takes his eyes off the screen only when we approach the house. He notices our interest in the device and explains that on the way to the patient, he has been studying all her details.

Since the end of last year, the electronic database for all city and regional establishments of public health services has been operational in Pinsk. Valentin explains that now the patients’ medical record is carried on a special server. It stores information about all applications to the central 1st city polyclinic and children`s polyclinic. The database also contains information about visits to the city hospital and children`s hospital all of which is accessible to emergency doctors at the click of a button.

The doctor shows me the tablet. The display shows surname, name and patronymic of the patient. There is information on address, age and social status — a pensioner. On a separate tab it is possible to see recent visits to the polyclinic and any doctor’s diagnoses. But this information is of an exclusively therapeutic character. The data on visits to narcologist, venereologist and other ‘sensitive’ doctors are not shown here. There is enough information to help render aid to the patient more effectively and more qualitatively. There are also diagnoses from experts such as therapists, surgeons, allergists and others. Valentin notices that it is the first time that the patient has complained of arrhythmia. It’s unlikely in these circumstances that patient will need to be admitted to hospital, but will probably be treated at home.

We arrive at the destination; the team goes to the patient and returns in twenty minutes. Valentin Trotsky smiles: the electronic database has proved its efficiency once again. The old woman was not able to remember the last time she had visited the doctor, the information was however, easily gained from the tablet. There are many similar cases, even though the Pinsk emergency team has only been using the devices for the last three months. One particular patient was coughing blood, but would not admit that he was ill with tuberculosis, only the information from the uniform database helped to cast a light upon his illness. Something similar occurs to people who pass into a comatose state, usually diabetics whose sugar level quickly increases in the blood. Of course, it is impossible to inject additional glucose when the person who is lying unconscious cannot explain the nature of his illness. Again, the invaluable tablet can save the lives of chronically ill patients.

It is impossible to say that the database contains information about all patients in Pinsk and district, as not every resident has visited the doctor since the launch of the scheme. Valentin Trotsky is certain however that the database will eventually contain exhaustive information about everyone who visits the doctor before a year is over, and it is already saving lives.

The Head of the Pinsk infirmary, Sergey Pasevich, agrees: the eight electronic devices with which the ambulance cars are equipped have already proved their worth. Certainly, the young doctors had no problems with the transition to tablets, while the more senior colleagues had to work a little harder. In due course all have agreed that the benefits of using the tablets are obvious. On the way to patients the doctor can learn practically everything about them from possible allergic reactions, the last date of any electrocardiogram or vaccinations to previous diseases. Sergey Petrovich is sure that it helps the public health services of Pinsk to improve their efficiency. For minimal expense, this additional information makes it possible to reduce the time needed to help patients as well as reducing the number of precautionary hospital admissions.

The Pinsk emergency response scheme will not only be limited to information about patients. Soon each tablet will have a special navigation programme helping doctors to reach even the most remote districts of the city more quickly. The next step would be to equip all tablets with a special device for electrocardiograms with the results registered on the tablet. In the case of hospitalisation of the patient, their electrocardiogram could be transferred with them to hospital.

Sergey Konyukh, the Head Doctor at the Pinsk Central Polyclinic:

The idea of equipping the Pinsk first response emergency team with tablets appeared only recently. We have not adopted someone else’s experience. We simply learnt that such practice exists in some countries and so we bought devices and implemented them. We understood immediately the advantages of tablets and did not hesitate to purchase them. The Pinsk City Executive Committee supported the initiative and city businesses helped financially. The tablets are a visible part of the project but not the only one, behind the scenes the creation of a uniform database for public health services in Pinsk and district was the first stage. It is only with an efficient database behind them that the tablets will save lives. Without it they are no more than toys.