Veteran from Ural Region names himself as dashing hero-motorcyclist depicted in Minsk on July 3rd, 1944 canvas

Yekaterinburg’s Dmitry Suvorov stormed into history on his `Harley`. Of course, Harley-Davidson motorbikes have featured in many devil-may-care films, but the war history of Red Army motorcyclist Dmitry leaves all American action films in the dust. The Great Patriotic War veteran is immortalised in Valentin Volkov’s Minsk on July 3rd, 1944: the well-known monumental canvas. However, it was only recently that Dmitry publically admitted that the picture had been inspired by his own actions. 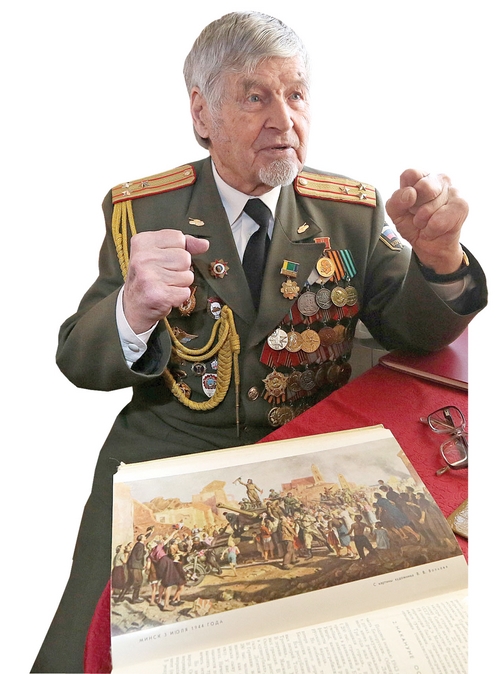 The symbol of victory for Minsk residents tells us, “I was a signaller and a scout, accompanying the first column of Soviet tanks as it arrived in Minsk, on my motorbike. I still remember the dawn of July 3rd, as the partisans led our brigade into the suburbs. From a small hill, you could see the city shrouded in smoke. The sun rose and the mist lifted as we went forward. I felt ‘as one’ with my motorcycle, seizing the handlebars and driving through gunfire, as the tanks roared right behind me. I rushed through the streets like a fiend, communicating with our divisions. When we reached the centre, women came up with flowers, as did children. We were all shouting ‘hooray!’ and rejoicing.”

The Ural veteran assumes that artist Valentin Volkov was an eyewitness, as he lived in Minsk during its German occupation and saw the liberation of the city. Unsurprisingly, the Day of Victory made a lasting impression, inspiring Volkov to record those events on a canvas 5.5m x 3m, in the post-war years. In fact, the picture took ten years to complete, only going on show in 1955, at the 10-day Festival of Belarusian Art in Moscow. 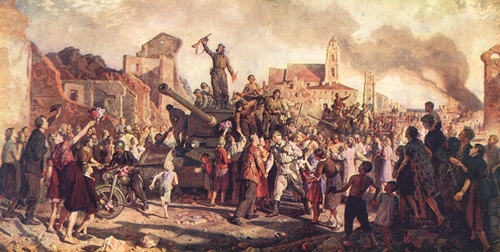 During fighting for the city, the artist would not have asked for the surnames of liberators, although he probably made sketches. Even photographers from the Front could not keep pace with every aspect of the attack, although some liberators’ surnames are known. In particular, Commander Dmitry Frolikov’s Т-34 led the offensive operation, winning him the title of Hero of the Soviet Union. Minsk streets still bear the names of his crew. Dmitry tells us, “I was in front of Frolikov’s tank brigade, on my motorcycle, providing communication and reconnaissance. Sadly, all others present are now dead.”

Dmitry has no wish for fame in the annals of history, recalling the words of Tvardovsky that people went to fight ‘not for the sake of glory, but for the sake of life on Earth’. This is an unshakable truth for the veteran, although the picturesque canvas illuminates vivid memories. He admits, “If I close my eyes, I am back in my tankman overalls, wearing a dusty helmet, seizing my motorcycle handlebars, ready to rush forward, surrounded by enthusiasm.” 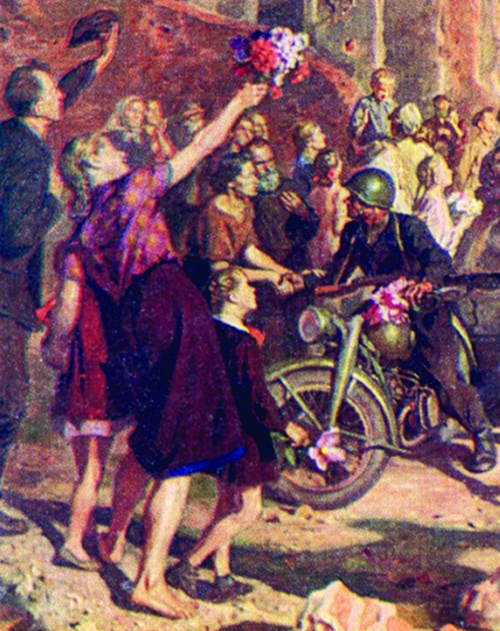 Pointing at an illustration in a book entitled The Great Patriotic War of the Soviet Union, he is clearly moved. It was in this very book that Suvorov first saw the picture, in 1965, in a shop in Lvov, where he was serving as an officer. He told his wife about the picture, but thought nothing more of it, having everyday concerns to focus upon and a modest nature. He certainly made no move to seek out Volkov or his relatives. Decades passed, he retired as a colonel, and moved with his family to the Urals.

Only now, aged 88, and writing his memoirs, has he mentioned his part in the liberation, and how he inspired the legendary painting. Former Red Army man Suvorov has private documents to prove his words: his Red Army book, identification card and award orders, as well as citations from the memoirs of well-known commanders long included in the history of the Great Patriotic War, as having set out Operation Bagration. He shows me his pile of books: the proofs one by one. Despite all this, he retains a sense of humility, confessing that, aged 18, he felt himself to be nothing more than a rural resident of Kostroma Region, who had spent just a few months at the Front. He calls himself ‘a grain of sand in the field of war’. Of course, that ‘grain of sand’ was brought to the very crest of the offensive.

The wise veteran is convinced that the true glory lies not in who came first or who was noticed but in having endured, and survived. With his ‘Harley’, Red Amy man Suvorov found himself in a particular situation: one that has inspired not only paintings but films. Alone, he rushed into villages occupied by Germans, captured rivals, and became stuck in the Belarusian marshes (needing to be pulled out by tank). His medals offer proof of his bravery, including his award ‘For Courage’ — given for helping liberate Belarus. He was also bestowed with the rank of guardian, of which he is proud. The Order of the Red Star and a medal ‘For Seizing Königsberg’ additionally crown his collection.

Suvorov was inseparable from his `Harley` until May 9th so it’s a pity his `iron friend` wasn’t immortalised on canvas for Volkov’s work of this date, rather than the German Zundappin motorcycle: perhaps it was a model with which the artist had more familiarity, since they were used by the Soviets and Germans during those war years. Only a few American `Harleys` were in operation, presented on ‘lease’.

Dmitry received a disassembled ‘Harley-Davidson’ a few hours prior to departing for the Front, spending all night putting it together. It was his first experience with a foreign vehicle but only the steering presented him with difficulty. His senior companions helped him, and his ‘Harley’ then carried him across all Europe. He returned it on the eve of May 9th, 1945.

“I received an instruction from headquarters to return to tank school, to study, so I had to give back my motorcycle and weapons. The next morning, Victory was declared! I was just a boy, so it was a pity that I had nothing with which to express my happiness. I could not give a signal, or offer a gun salute from my automatic rifle!” Dmitry recollects with laughter.

Having studied heavy tank machinery, Dmitry Suvorov never again rode a motorcycle. He certainly didn’t become a cool rocker. Neither did he ever return to Minsk, having no opportunity to see the restored capital of Belarus during the Soviet times. When he retired, health prevented him from doing so, but he regrets failing to seek out the partisans who guided the tank brigade into the city suburb so poorly defended by the Germans. The group last met on July 3rd, in a private Minsk garden, to celebrate the liberation of the city. Dmitry’s recall of their full names, and the address of that blossoming garden, is no longer within his grasp. However, his chain of youthful, fighting memories remains intact, flying at the speed of a ‘Harley’.