Summarising the last meeting in Moscow, of the Supreme State Council of the Union State of Belarus and Russia, the President notes, “In this difficult situation, we know what to do and have agreed on solving it together, as befits fraternal peoples.” Such is the essence of the documents approved at the Kremlin. 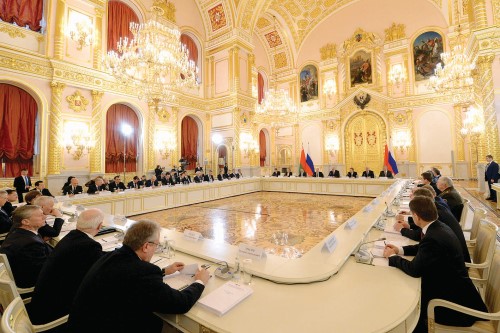 Priorities for further Union State development until 2017 include strategies for trade and economic cooperation and a clear, unified anti-crisis plan, aimed at minimising the negative effect of global shocks.

Why is a common plan of action required? It’s understandably difficult, even for large countries, to withstand the world crisis alone. Our Belarusian and Russian economies are so closely interlinked that it’s impossible to work separately; to try and do so would bring only aggravation. Russia is responsible for just under 49 percent of Belarus’ foreign trade turnover, although our country has been working hard to find new markets, with some success. The Eastern vector remains foremost, and our country is one of Russia’s main trading partners (holding fifth position behind China, the Netherlands, Germany and Italy). Such mutual attachment explains our shared interest in furthering dynamic trade and economic co-operation.

Our common anti-crisis strategy aims to maximise access to products and services for Belarus and Russia, across both markets: an area fraught with problems over recent months. Belarus appreciates the complexity of the situation in which the Russian Federation finds itself, having empathy with the sanctions bestowed on our partners. However, this should not affect our bilateral co-operation. We need a common approach to assessing the quality and safety of products, monitored at a higher level, to avoid discrepancies in departmental interpretations.

Presumably, all these subtle nuances will be taken into account when implementing our governments’ common plan, in which we aim to help economic entities expand their provision of products and services for state needs: a superb tool to stimulate activity and support our enterprises in today’s unfavourable global market.

Also significant is the promotion of investment co-operation: a trend evinced equally on both sides: last year $6.26 billion of Russian investments came to Belarus, matched by an impressive $2.25 billion from Belarus into Russia. We could list many examples since no sphere exists in which we fail to co-operate. Importantly, Belarus and Russia view each other as mutually valuable partners.

Vladimir Putin’s award of the Alexander Nevsky Order upon Alexander Lukashenko (for helping improve the social and economic development of Russia) is a bright touch. Of course, co-operation between our two countries is of mutual benefit and is more vital than ever in times of crisis. Undoubtedly, our efforts will bring new profitability.