Artists from Minsk, Grodno and Mogilev have been joined by Polish, Lithuanian and Latvian teams, all coming at their own expense and without asking for a fee. They are representatives of the ‘art of excluded people’. Plastic theatre as a special art does not exist in the Belarusian consciousness yet, and also is currently lacking state support. However, some domestic teams are well known abroad and the recent forum attracted officials from the French and Polish culture ministries. 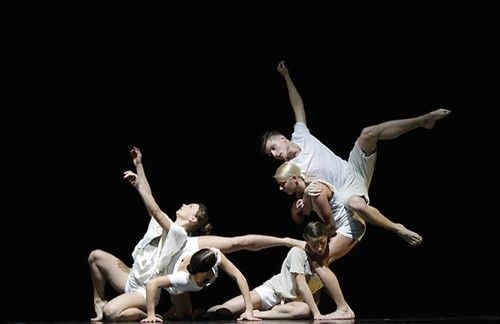 An incredible gap exists between traditional and modern dance. This gap is even wider when speaking of choreography and plastics. The new style is not dancing theatre or ballet: its representatives oppose classical choreographic glamour, beautiful dresses, luxurious decorations and tuneful melodies but focus on the absolute freedom of bodies and movement in the space.

Plastic theatres are at the beginning of their development in Belarus. Some regard this new style as ‘modern’ and others think it has its roots in the practice of mime and ancient pantomime. There are also those who view the trend as ‘newly invented systems of dancing culture’. Performances of plastic theatres include elements of clownery, acrobatics and pantomime while their improvisation and absurdism are sometimes intermixed with fantasy and dreams. A human body is the major indicator of feelings and texts and psychological nuances play a minor role. Modern theatre appears to be tired of words.  ‘Plastics’ comes from the Greek word ‘sculpture’. In a plastic theatre, these are sculptures of human bodies. Being strange, ugly or comical, they actively move and are ready to amaze the audience at any moment with their tricks. One of the founders of this trend in Belarus is Slava Inozemtsev, who also initiated the 3rd Belarusian PlaStforma — ‘the theatre of plastic grotesque’.

There is more to this new idea than meets the eye. Belarusian plastic theatres have their peculiar features: they include philosophy, an interest in Japanese ‘bunto’ dances and special spiritual practices. This is a separate world to traditional dance that is interesting for young people in particular. Sadly, some theatre critics have no sympathy with such troupes; the latter are mostly privately run, lack their own buildings and rely on enthusiasts. They are often dismissed as ‘sub-culture’.

Mr. Inozemtsev’s InZhest Theatre has been in operation since the 1980s. It’s has toured Germany and Europe receiving prestigious awards at Russian and Ukrainian mime parades. In over three decades of its existence, the troupe has trained dozens of artistes but is still only known as a people’s theatre from the Plant Integral’s House of Culture. This small recognition however, enables the theatre’s head to receive a salary, artistes enjoy a stage for rehearsals and audiences have the chance to enjoy projects filled with artistic anarchy and a synthesis of traditional arts with philosophy.

Nine theatres of the kind are now to be found in Belarus and among the most famous are Alexander Tebenkov’s Gallery (from Grodno), Olga Skvortsova’s Skvo’s Dance Company, Olga Lobovkina’s Karakuli and finally Slava Inozemtsev’s InZhest. All brought their new shows to the festival including Irina Anufrieva, a former pupil of Mr. Inozemtsev’s now living in Sweden.