So lived our ancestors

The house-museum is located in the village of Rudnya in the Svisloch District, designed to show visitors how people once lived in the Belovezhskaya Pushcha. The museum boasts over 250 artefacts from everyday life: icons, early-20th century paintings, documents, and money from several periods of history, as well as tools, utensils, items of clothing and toys. Many were donated by local residents. 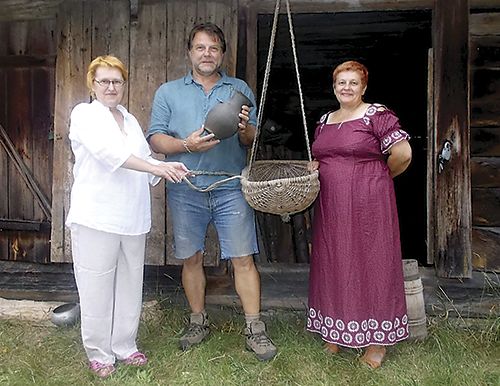 There are a lot of objects more than a hundred years old in the museum.


The owner and manager of the museum, Mikhail Guskov, tells us, “We`ve restored our authentic Russian stove, used for heating, cooking, for drying mushrooms and berries, for illumination and as a place to gather and rest. The museum also has a spinning wheel, a kerosene oil lamp, and various handmade items: doormats, coverlets and embroidered linens.”

Among the most valuable exhibits is a collection of reproductions of engravings by Anton Kaminsky, a well-known pre-revolutionary author and illustrator who depicted nature and the way of life in the Belovezhskaya Pushcha. He also rendered portraits of well-known people who visited Rudnya: among them pictures of Russian and French army generals (who led their troops through Rudnya in the autumn of 1812). The museum also stores local history materials collected by regional librarians, and reference books.

Experts from Belarus and Poland helped set up the museum, whose board of guardians comprises historians, curators, teachers and entrepreneurs from Belarus, Poland and Russia. Various exhibitions are planned, with participation of local artists: at present, Anatoly Polozkov’s wooden sculptures of animals are on display.

Mr. Guskov emphasises that the museum has a very important role to play in preserving the historical and cultural heritage of those who have lived in the Belovezhskaya Pushcha. "We hope that it will become a tourist attraction for people from Belarus and abroad, as well as that it will be used to educate youngsters and encourage understanding of local culture,” he adds. The museum even has its own pages in social networks to promote its activities.
Заметили ошибку? Пожалуйста, выделите её и нажмите Ctrl+Enter