Belarus’ correspondent spoke with a street-artist, who uses walls as his canvas.

Flashy inscriptions on the walls of houses, entrances or garages are usually the domain of graffiti artists. Most of the time, this is simply vandalism, but there it is a legitimate ‘street art’ when drawings appear on facades of buildings absolutely lawfully, with permission of the authorities. Belarus’ correspondent spoke with a street-artist, who uses walls as his canvas. 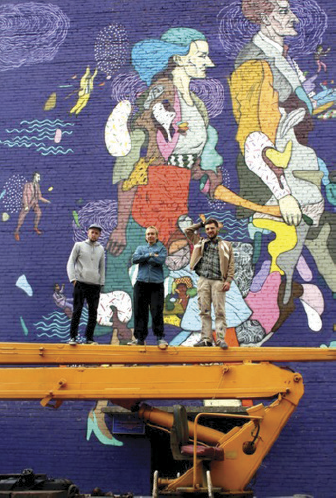 Yevgeny Kovek is not a troublemaker, but one of those who wants to beautify the city, to make it nicer and different from other cities.

“Artists should create city pictures in a civilised and ‘thoughtful’ way,” says Yevgeny. “There should not be any random daubings on the walls, only clever drawings which would arouse the interest of people.”

Pencils, paints and paper are used at night, when Yevgeny creates his models of his future city pictures. Officials then check and approve them. The main city or regional architects, experts of housing and communal services choose the most pleasant sketch, co-ordinate the sizes of each drawing and its location. Usually, these are buildings close to high populations, or structures whose appearance leaves much to be desired. Then, once approved, the follows work.

Working for art and for apples


Drawing on the facade of a five-floor house requires three-five days of work. The city administration gives artists lifts, cranes and, when possible, other necessary equipment so that they can reach the necessary floor. All the rest, from materials to meals and accommodation during their creative trip, are paid by the artists via sponsorships. For example, in order to complete an image of 40-50 square metres, it is necessary spend up to Br3-5 million.

“New things always cause fear and suspicion. People still are not ready for street-art, but slowly, step by step, people are coming around,” Yevgeny explains. “The reaction of people to our work is always different.”

Once in Gomel, several guys beautified some small outbuildings. Naturally, all was done with the permission of the local administration. However, the local old women did not like it and were outraged that nobody had consulted them. They called for the police. Artists were not perturbed, they continued quietly with their work and, when police came, they simply showed all the necessary documents. However, the old women continued to protest. One street-artist explained that, for such cases, they always have the contact telephone number of the person from administration who will come and explain that the walls are painted absolutely lawfully. On this occasion, the official was nearby, and the problem was solved. 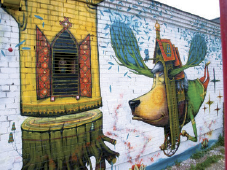 There have been other events. Once, some artists were painting a wall and one man approached them and asked, ‘What do you need to be more comfortable?’ An hour later, he returned with big box of products. It was a pleasant experience for the guys.

“One person shouts at us and another thanks us,” the artist says. “But people don’t realise, even a children’s playground that is decorated with fantastic heroes, is also street-art! And take for example the grey transformer vaults, which can be found almost in every courtyard. It is possible to decorate them with Belarusian ornamentation too.”

Once, in Mogilev, artists painted a bed in a courtyard, which local residents had made from old tyres. On this occasion, the elderly residents were friendlier and several old women approached the artists and asked them to paint handrail and turnstiles. ‘We can’t get anything out of the housing maintenance service, maybe you guys could help us’, they asked.

“They constantly fed us when we painted their stands for drying linen,” recollects the street-artist.
Thus, by permission of the local authorities, street— artists beautified the facades of seven apartment blocks and ten buildings of Mogilev, Gomel, Grodno and some regional centres. In the near future they will go to Brest, Vitebsk, Mozyr, Polotsk, Rogachev and Yevgeny’s native city of Lida.


Aerosols, acrylics, brushes, paint rollers, stencils, posters, stickers and improvised materials are usual tools of the street-artists. Actually it is possible to draw with anything. Yevgeny admitted that one time, his peers created a picture using ketchup and mayonnaise. However, it did not exist for long. 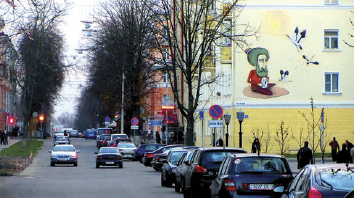 “Once, a colleague and I made four sculptures from leaves, plastic bottles and newspapers. These objects represented the seasons of the year,” Yevgeny tells me. “We installed ‘Autumn’ in Gorky Park in Minsk. It took us about 40 minutes. When we had finished, we decided to take a walk. When we returned, twenty minutes later, there was a crowd looking at it: adults, couple and parents with their children. Some were taking photos and someone checked our creation to see how strong it was…”

Nearly all of Yevgeny’s latest work is based on the culture of Slavic people; on the symbolism which has survived until today. The artist tries to draw attention to it. “We can reveal themes of pagan and medieval traditions, the beauty of Belarusian nature directly on the walls of dull streets. However, it is necessary to create it in an unusual way. It is important to keep it interesting,” he tells.

Ideas come to his head spontaneously, like a shot in the dark, and only then does he consider the details of his next sketch.

“Art is my weakness,” Yevgeny admits. “When I was just three years old, my parents noticed my thirst for drawing and they tried to help to develop this talent. I remember, I very much liked plasticine. I played with it all the time. When something in the house broke, I tried to stick the pieces back together with the help of plasticine. I was very obstinate in my childhood. I did not like waking up early in the morning to go to kindergarten. Obstinacy probably lives in me even today, but now it is connected with my creativity.”