Several years ago, the Ambassador Extraordinary and Plenipotentiary of Israel to Belarus, H.E. Mr. Yosef Shagal, admitted that the main objective of his diplomatic mission was to abolish visas between our two countries

Several years ago, the Ambassador Extraordinary and Plenipotentiary of Israel to Belarus, H.E. Mr. Yosef Shagal, admitted that the main objective of his diplomatic mission was to abolish visas between our two countries 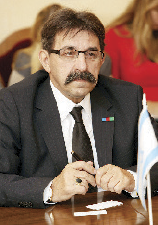 It is now possible to congratulate the Israeli diplomat since, at the end of September, a long-awaited agreement to abolish the visa regime was signed in Minsk. Presumably, the agreement will come into force when all the domestic procedures have been gone through, to facilitate holiday trips for Belarusians and Israelis in the nearest future. The agreement allows for up to 90 days stay every 6 months. As Minsk and Tel Aviv are connected by direct flights, the move is sure to promote tourism.

Israel is the 23rd country to which Belarusian citizens can travel without visas. Although the abolition of the visa regime will bring a reduction in revenue for Belarus (since Belarusian visas were priced at approximately quadruple those for Israel) the agreement has many other benefits. Simplification of visa formalities promotes not only tourism but business contacts, inspiring investment and raising the profile of the country internationally. Strategically, the move has far more advantages than disadvantages, especially when it concerns co-operation with such a country as Israel: home to 8 million people and ranked second globally for technologies (its main export). Lacking essential natural resources, the country is a second ‘Silicon Valley’, ranked in the top 20 of the human development potential index. Last year, for the first time in history, Israel’s GDP exceeded a trillion Shekels ($300bln). Foreign investments into the economy of Israel are breaking records, last year reaching almost $12bln.

As Belarus relies on its knowledge and innovations to generate revenue, co-operation with Israel can only be to its benefit. Meanwhile, Jewish communities lived on Belarusian lands for almost six hundred years — in peace and harmony. Today, more than 120,000 native Belarusians reside in Israel, many enjoying wonderful careers. The first president of this country, the well-known scientist Chaim Weizmann, was a native of Brest Region, while ex-president Shimon Peres was born in Volozhin District of Minsk Region, and the parents of former Prime Minister Ariel Sharon also hailed from Belarus.

Israeli businessmen are interested in co-operation in the sphere of medicine, having the highest world indicator in treating oncology — thanks to the equipment for early diagnosis of tumours. Not long ago, Israeli scientists found a way to diagnose cancers from simple blood analysis. Additionally, considerable Israeli investments are directed towards property construction (such as those conducted by the Fishman Group). Such co-operation is mutually advantageous and will, no doubt, be encouraged by the visa-free regime.

The Israeli Ambassador to Belarus is often asked how it is that Israel’s agricultural success is the best in the world, despite being 80 percent covered in sand. His answer is that the first farmers arrived from Belarus, bringing their expertise! The lifeless desert has become a blossoming oasis of vegetables, fruits and magnificent roses (exported to Europe). Belarus is already applying Israeli technologies to its agrarian sphere, cultivating African catfish in Brest Region, and organizing pig-breeding and poultry-farming.

Yosef Shagal explains, “Our technologically is perfect for Belarusian agriculture, because you have huge possibilities. Everything that we grow and produce does so contrary to the laws of nature, while God gave Belarus more favourable conditions: woods, pure air and rich soil. That’s why your products taste so natural. If you use modern technologies, you can market them at competitive prices. In all respects, Belarus has the chance to enter the top-ten of world food suppliers. Food is essential to our future well-being. We may find alternatives to oil, but never food. Strategically, Belarus is focused correctly.”