Soon the fans of young, yet enjoyed by many Belarusians style in art — ‘steampunk’ — will demonstrate their works at Minsk’s Centre of Modern Art

Seeing the world through goggles

Soon the fans of young, yet enjoyed by many Belarusians style in art — ‘steampunk’ — will demonstrate their works at Minsk’s Centre of Modern Art. The first exhibition is to take place in May, enabling guests to get acquainted with the exposition while also communicating with representatives of this ambiguous trend.

‘Steampunk’ defies definition as an art form, being a blend of late-19th century culture and the fantasy genre. Its heroines might wear a corset with metal inserts over their dress, sewn from natural fabrics, adorned by a revolver at their belt. Goggle glasses often complete the look, while a flame-thrower and gas mask would complete the impression. Nothing is too daring, with mechanical accessories all the rage.
The notion of ‘steampunk’ has only recently arrived in Belarus, although its older fans have long enjoyed elements of the genre, without knowing that it had a name. The ‘game for adults’ is one enjoyed by married couple Sergey and Yelena Gayko. Other founding fans are musician and director Olga Akulich, and Dmitry Tikhonenko: the ‘master of copper affairs’. Dmitry’s beautiful and unusual creations are admired far and wide.

Such is the following that lovers of ‘steampunk’ now regularly meet in Minsk cafes and clubs. Businessman and father Sergey Gayko is at the heart of the subculture, organising themed parties in the capital. Asking him to define the philosophy of ‘steampunk’, he cannot give me a simple answer, believing that its essence lies in defying definition, combining seeming opposites. Sergey admires writer Yevgeny Kluyev: in particular, his Between Two Chairs, where the writer clearly reveals the essence of asymmetric dualism.
Certainly, the meeting of opposites is a well-trodden path by artists and writers through the ages and the paradox of human communication is that, in voicing our opinions, we run the risk of being misunderstood. So are conflicts at home and work born...

Sergey, some view ‘steampunk’ as just another passing trend while others see it as a form of a passive aggression. A Beautiful Mind, directed by Ron Howard, comes to mind. As far as I understand, ‘steampunk’ is a departure from reality, to an imaginary world. What is your personal interpretation?
For me, ‘steampunk’ is the form of expression: a lifestyle. No matter how you define it, such views are always subjective. In defining it, we remove part of its soul, as the saying goes. Naming an idea does not give it substance. We have adopted the term ‘steampunk’ only because it’s convenient to do so.

Does this name equate to a definite historical epoch?

Yes, to the Victorian age, but the time period isn’t relevant. That time was the last for ‘living things’; there was a transition to industrial manufacturing, yet many items were still made by hand. They were high quality and ‘real’. Now, synthetic materials dominate, and not always of high quality.

Such items have their advantages, since fashion is transient; there’s no point in making clothes to last years.
From the point of view of profit, you’re absolutely right. However, there is more to life than money.

What benefits do you bring?

I have a workshop where I create various interesting items in ‘steampunk’ style: each unique and unavailable elsewhere, unless you pay a great deal of money.

Is there a fundamental difference between decorating a dress in rhinestones or diamonds?

I prefer natural materials. Those who built the Moscow metro in the 1930s wrote that wooden seats ‘should be covered with a transparent varnish, to avoid the temptation of painting’. Meanwhile, our main Nezavisimosti Avenue is built to last, using old techniques. Its plaster endures, which is an unthinkable luxury for modern constructions. I, as a designer, know what I’m talking about. 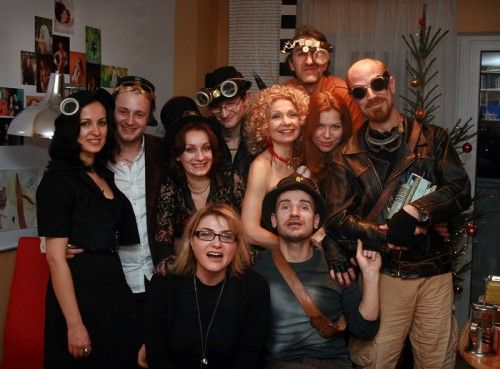 Steampunks are preparing for the holiday

What do you do in your everyday life?

I produce exhibition stands and design interiors for shopping pavilions, shops and cafes.

Now I understand what attracts you to ‘steampunk’. It offers a platform for creative fantasies. What activities do you engage in?

We organise costume parties, invite musicians, dance, hold contests, organise exhibitions, and take photos. In short, we have fun. We are now preparing our May exhibition, having gathered enough like-minded people. Among them are literary figures, filmmakers, artists and designers.

Is it an escape from imperfect reality into an illusory world of ideals? Shouldn’t we rather try to influence those aspects of life we dislike?

You see a contradiction where none exists. It is a hobby, nothing more. We all live in this reality, whether we like it or not. Moreover, we influence life with each act of creativity — such as by making unique items. Those I make, as well as my attitude, are real.

Aren’t you afraid that ‘steampunk’ will be judged only on its gaudy costumes?

It depends on your goal. Those who wish to find out more will do so, while others are happy with a surface perception, expressing through costume and appearance, and mocking life a little.

Currently ‘steampunk’ is at a peak of popularity, with fans seeking out vintage interior items, goggles, walking sticks and so on. Who sews your clothes and makes your accessories?

Many items are just reproductions, in plaster — but not all. Walking sticks I order from Bogdan Shimanovich, who makes them skilfully. A great number sew costumes from whatever is at hand; there are no strict rules, which allow you to ‘play’. Yes, we emulate the fashions of centuries ago, but add a little imagination to create ‘steampunk’ style. I don’t enjoy ‘steampunk’ because it’s popular; on the contrary, I see myself as having set the style. Two years ago nobody knew about ‘steampunk’; now, the word is used commonly to describe, for instance, a lamp!

How have you aided the popularisation of this trend in Belarus?

I’ve not done so alone. One New Year’s Eve, my wife and I organised a thematic party at home, ‘issuing a call’ online. So many people wanted to join us, including Olga Akulich, who offered her help professionally. That was the beginning. In a short time, well-known Dmitry Tikhonenko joined our society. He had enjoyed the hobby for a very long time: now that hobby has a name. Hundreds of people from various regions of Belarus attend our parties.

What is the female image in this style: a fragile girl with a bouquet of field flowers or a militant Amazon?

The Victorian age was one of geographical discoveries, travel, and colonisation. Woman could be dynamic, inquisitive and curious. Dressing in this style, she might carry binoculars. She doesn’t need to sit home waiting for her husband, rather taking an active role in her own life. She may well wear a hat and skirt, but her spirit is more than her costume.

How do you see the future of ‘steampunk’?

You wish me to praise the movement but I dislike the sphere of words for their own sake. Postmodernism proclaims the idea of ‘spying for spying’s sake’. In pinning down a phenomenon, we may move further from its essence. Each evaluation is subjective. I live in the real world, performing real work, as I think is right. If everyone acted similarly, our world would be a better place. I don’t care whether ‘steampunk’ is remembered for having bettered the world or not.