Returning to our origins

Many modern urbanites have little idea of how Belarusian villagers lived about 70-80 years ago. Accordingly, such places as the Bezdezhsky Fartushok Folk Art Museum, in the Brest Region’s Drogichin District, help us to gain insight into the past. 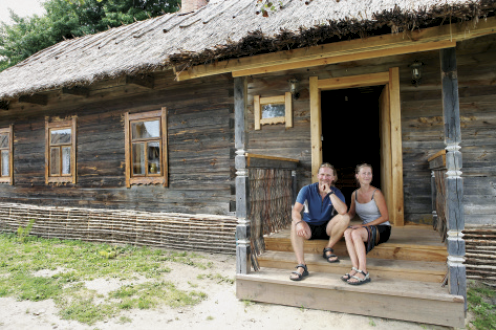 The visitors are delighted with the museum


Bezdezh’s unique museum opened 15 years ago, explains Leonid Kurovsky, who heads the Ideology and Culture Department (overseeing youth affairs) for the Drogichin District Executive Committee. He tells us that Drogichin was to host a local history museum but it soon became clear that almost all the artefacts came from Bezdezh and neighbouring villages, so it seemed logical to establish a village museum instead. Fortunately, Bezdezh had an appropriate venue: an abandoned Polish-style brick building, which had been used as a school. Original hand-made aprons comprised the lion’s share of exhibits, so the museum was named Bezdezhsky Fartushok (Bezdezh Apron). It now houses over 200 beautifully embroidered snow-white aprons.

Bezdezh has a rich history, being first mentioned in 1409. However, nobody knows how it acquired its name. One legend states that a castle and a village of the same name are found in the Czech Republic and several Bezdezh settlements are registered in Russia. It’s quite possible that, in the past, Bezdezh foreigners came to Belarusian lands to establish their own settlement. Implicitly, this is confirmed by villagers’ outlook and daily routine, as they are especially pious (even God-fearing) and love culture and literature. Moreover, local people are extremely apt at handicrafts: ‘Bezdezhsky fartushok’ is a true Polesie brand, since only Bezdezh residents can weave such fine linen: at least 300 threads can pass through a wedding ring. Moreover, their cloth is whiter than any other. Those beautiful aprons now grace the museum collection.

Belarusians learnt of the Bezdezh phenomenon in 2009, when the museum’s Director, Maria Ostapovich, received the Presidential Award ‘For Spiritual Revival’, with the ceremony hosted by the Palace of the Republic. The museum is now uniting efforts with Kalya Plesa Farm [Ples is the name of a river passing by the village] to launch a Bezdezh tourist zone, with support from local authorities. Anyone visiting the area can find out about the unique sites of natural beauty and interest across the Drogichin District.


Travel always brings new memories and new acquaintances. In meeting those who differ from us, and seeing the artefacts they produce, we come to appreciate the diversity of our national culture (as well as that of international cultures) and the special qualities of our own cultural heritage. The dedication and industry of such people as Maria Ostapovich and Leonid Kurovsky allows us to witness the treasures of the past: revived and on public display. Ms. Ostapovich tells us, “We planned to build a farmstead close to the museum long ago but lacked finances. However, the ‘Spiritual Revival’ Presidential Award became the first contribution towards realising our project.

In looking at Bezdezh Museum, we should begin with an excursion to the neighbouring farmstead: its outbuildings are set up as traditional workshops, full of peasant tools from the late 19th-early 20th century. You can touch them, or try them out, as well as ride in a cart or a colourfully painted sledge (depending on the weather). The farmstead is also home to domestic animals, which can be petted: a horse, pigs, goats, rabbits and hens. Tasty Belarusian cuisine, cooked on a traditional stove, is always on offer, using locally grown vegetables, and mushrooms and berries gathered from nearby forests. Kalya Plesa also invites visitors to try Belarusian sausages and honey from its own hives.

While some view marzipans as sugar-covered nuts, Bezdezh villagers call baked potatoes ‘marzipans’ — eaten in their jackets (‘lupenki’). Cabbage baked in ashes, served in slices with healthy flax oil, is another local delicacy, alongside home-baked bread, which stays fresh for several days. Bezdezh villagers also love to use makukha to flavour their cooking, made from ground and dried flax seeds.

The farmstead has its own small secret: one part resembles an ancient room while another one sets up as a modern hotel room (large enough for a family). 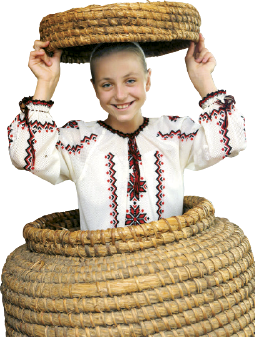 Marina Pratasevich from Bezdezh demonstrates a basket for grain storage


Bezdezh used to host regular fairs, gathering villagers from the surrounding area, but the coming of the railway line through Drogichin made such gatherings less popular, and the village slightly lost its status as a hub. Bezdezh villagers gained a college in 1824 and, from 1825-1832, this became a branch of Vilno University.

Bezdezh remains a landmark — boasting rich historical and spiritual heritage and its own unique energy. As Ms. Ostapovich notes, it’s no accident that so many interesting historical-cultural phenomena originate there. A UNESCO listed Struve Arc point is located at the entrance to the village (if approaching from Khomsk): a plaque was installed on the site last year. It is an entrance ‘gate’ to the Bezdezh tourist zone, which is soon to welcome its first guests. Bezdezh Column is another fascinating spectacle, thought perhaps to have been erected to honour the adoption of the 1791 Rzecz Pospolita Constitution; others link it to a battle in the Russian-Swedish War. St. Trinity Orthodox Church, built in the late 18th century (without a single nail) is another ‘must-see’ for visitors, as is Bezdezh’s Trinity Roman Catholic Church: almost two centuries old and the only RC church in the district.

Mr. Kurovsky reveals, “In future, we’ll launch a hotel near Kalya Plesa, able to accommodate two dozen guests. We’re preparing eco tourist paths, for horses, cycling and walking, and aim to build observation platforms around the artificial lake in Sporovsky Reserve, so that people can nature-watch in comfort. In summer, the village banya will open and we plan to move a windmill dating from 1900 to Bezdezh.”

Every year, Bezdezh hosts over 5,000 visitors to its museum, and gathers a great many for its folk art festivals, wedding ceremonies, corporate parties and celebrations for New Year, Maslenitsa and Easter. The Bezdezh custom of ‘Strilka’ is closely connected with Easter and has been placed on the Belarusian List of Historical and Cultural Treasures. Last year, the village hosted the Tanochek Regional Folklore Festival: a truly international event welcoming guests from the Baltic States and Russia.

No doubt, sites like Bezdezh will continue to grow in popularity with tourists; who among us doesn’t desire to travel back in time, to view the land of our forefathers?