The Great Patriotic War, undoubtedly, left its mark on People’s Artist of the USSR and of Turkmenistan Izzat Klychev. He volunteered for the Front in 1942, joining a signal company and fighting near Voro-nezh. He followed the roads of Belarus, helping forge a crossing over the rivers Vistula and Oder. Later, he was in Berlin on Victory Day.

His award papers read: ‘Corporal Klychev, as Senior Lineman, has more than once shown courage and fearlessness in defending signal lines. While servicing a signal line frequently breached in the district of Hotcha-Dolna-Gnyadkuv, he more than once made repairs while under enemy fire. Klychev especially distinguished himself on the night of October 22nd, 1944. The fixed line through the Vistula came un-der enemy artillery bombardment, resulting in a wire being damaged by a shell splinter. Klychev and his comrade went to fix the line and, in cold water, under shell bursts, managed to fix the breach by inserting a cable wire. He thus assisted in restoring unbroken communications’.

His award for this feat was the 2nd Class Order of the Patriotic War. Other awards given were the Or-der of the Red Star, and a medal ‘For Courage’.

Born in 1923, he remained a soldier throughout his creative life, alongside such Belarusian contempo-raries as Mikhail Savitsky (born in 1922), Leonid Shchemelev (born in 1923, and who forced a crossing over the Pripyat, being seriously injured near Mozyr), Victor Gromyko (born in 1923), and Alexander Soloviev (born in 1926, and who fought in the Baltics, being awarded the Order of the Red Star).

Belarusians fought hard militarily, with great results, and on a personal level. Almost everything today reminds us of the sacrifices made and the debt we owe.

In Turkmenistan’s Ashgabat, I had the chance to view many of Izzat Klychev’s works and could see how the land inspired him to use his favourite colour, red.

Destiny dealt a hard hand to Izzat from early childhood. His father, Annaklych, was a mullah: a well-educated person. Even before the revolution, as a teacher, he showed children a working model of the Solar system, with the rotation of the Earth around the Sun and the Moon.

In 1933, Annaklych was subjected to repression and, together with the family, was sent to cold North-ern Kazakhstan, to a camp. Izzat, aged 10, saw his father and mother die there, leaving him alone with his older brother Reshid.

In 1938, Izzat began attending a boarding school run by Ashkhabad Art College. There, he met Yulia Daneshvar, a Russian artist who became his first true teacher. After the Great Patriotic War, he studied in Leningrad and, at Boris Ioganson’s studio, created his graduation work: in the Karakum Desert. It was a work inspired by his time with a geodetic expedition, across the Karakum Desert. He spent the whole summer in +50 C° heat, surveying the land for a future pipeline, yet still found time to paint and sketch. “I was brought up in Russian culture, and received my education there; in adulthood, I breathed the spiritual atmosphere of Russia. However, I love Turkmenia and the Karakum Desert, which are insepa-rable for me,” wrote Izzat.

The artist became a professional of the highest class, gathering a following from the 1960s. He inspired debate, including on formalism (which was an unsafe topic for the time) and, in 1964, became a Peo-ple’s Artist of Turkmenistan. In 1973, he was named a People’s Artist of the USSR and, in 1967, re-ceived the title of laureate of the USSR State Prize for his ‘My Turkmenia’ cycle. For 15 years, he repre-sented his native republic in the Soviet parliament and, in 1983, became a Hero of Socialist Labour.

Today, looking at his Carpet-makers (1975) you can’t help but be struck by his vivid use of colour. The palette is mesmerising, conjuring up Turkmenia’s scorching desert perfectly, in which local residents are oases of kindness and moral force. His Girl with Cherries, Autumn Song, Desert, Legend, Daughter-in-law, Beluji, and Embroiderer are compelling. Among Izzat’s portraits are images of well-known writers Kayum Tangrykuliev and Seyitniyaz Ataev. The latter, a scout who passed the Great Patriotic War on the Frontline, asked me, several decades ago, “What attracts us to such great painters as Izzat Klychev?” He answered by enquiring how a de-sert smells, and whether I’d seen tulips in the foothills of Kopet Dag? “Have you heard the trembling of leaves in Firyuza? What colours do you imagine when you think about cotton?” he added, saying, “All the answers are revealed in Izzat’s works: his artistic discoveries, and his interpretation of Turkmenia and Turkmen.” 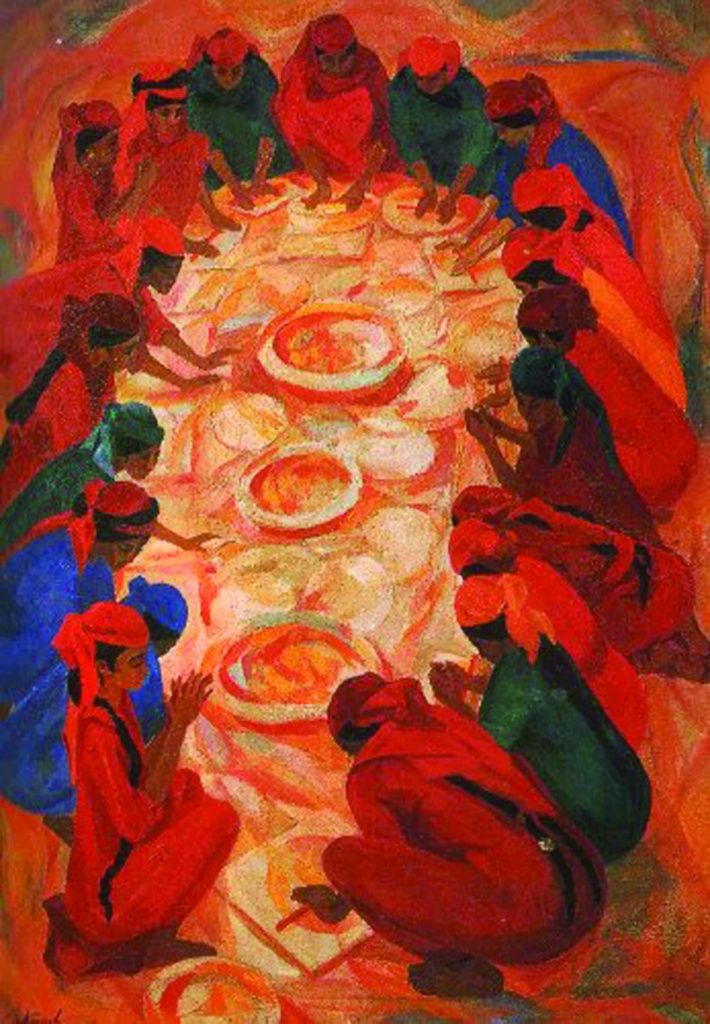 “Tomorrow is a Holiday”

I continue to believe in those words, the estimations of Seyitniyaz Ataev, the scout of the 1st Belarus-ian Front, and Honourable elder of the people of Turkmenistan.

Visit museums and galleries, and read albums on the artist; admire Izzat’s works, and you’ll soon see their energy, falling in love with Turkmenistan. 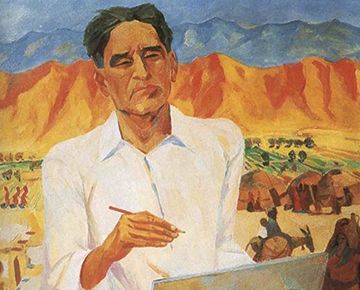