We need to sit down to talk, settling our differences. I’m convinced that no side is strong enough to survive alone. We need each other and only need to agree now

President of the Foundation for Worldwide Co-operation Romano Prodi recently delivered a lecture at the Belarusian State University. The top level politician, who has twice been Italy’s Prime Minister, met President Lukashenko at his Minsk lecture, which was rich in vital issues relating to international relations. Mr. Prodi shared his views on the modern world, demonstrating considered opinions concisely put. 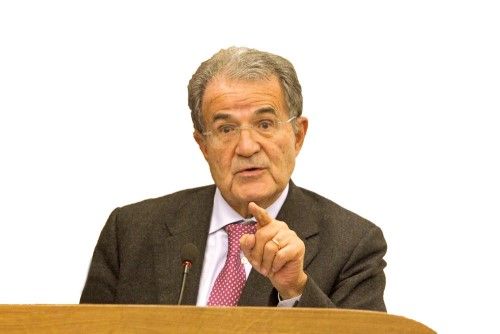 Naturally, the situation in Europe is Mr. Prodi’s main area of political interest; unsurprisingly, half of his lecture was devoted to European affairs and the EU. The other half was focused on the global situation — primarily, the economic sphere: few know better than the former PM of the third largest EU economy that state policy and prospects are guided by economic interests.

Falling oil prices and recent events are a blow to Russian economy but Mr. Prodi believes that sanctions are at the heart of its problems, with all parties losing as a result. Both the EU and Russia would do better to enjoy neighbourly relations and benefit from co-operation. At the moment, the two parties are experiencing serious disagreements, necessitating negotiations. Ukraine — which is a bone of contention — could become a bridge between Russia and the EU rather than a battlefield. However unpleasant the situation is, a reasonable solution can and should be found.

Speaking of the European Union, Mr. Prodi stated that its geopolitical security is a major advantage. Three generations of member states have now been living in peace: the longest period to date. However, from an economic point of view, such stability is far from steady. When the global financial crisis broke out, EU leaders failed to develop a single strategy to sustain economic security, which resulted in the crisis affecting EU states variously, breaking the previous balance of forces.

The EU grew from the union of France and Germany, at the heart of the European Union. Meanwhile, during the crisis, only Germany maintained a sustainable economy, with other EU members asking for help. As a result, Berlin gained the advantage of imposing its own conditions on the EU economic policy: sometimes severe not only for small economies but also for France. Naturally, such economic influence is now transforming into political, with Germany setting the direction for the EU politics. In the past, the American President called the British PM; now, he calls the German Chancellor.

Mr. Prodi remains optimistic about the EU, believing that it allows European states to take into account each other’s interests and to reach agreement, through common interests. In his view, the EU system is worthy of emulation as a replacement for unipolar or multi-polar world powers.  The structure aims to ensure that all countries boast equal rights — irrespective of size or culture — and that discrepancies are solved jointly. This might seem optimistic but Mr. Prodi’s message brilliantly reflects Belarus’ desire to respect historical identity, equal-righted dialogue and co-operation, as grounds for stability and wellbeing in international policy.

While staying in Minsk, Mr. Prodi agreed to answer the questions from SB. Belarus Segodnya newspaper:

What challenges and possibilities exist for the European Union in our modern times?

The EU needs to ensure its economic growth. In recent years, such states as Spain and Italy have witnessed weakening of their economies, bringing economic tension. The main task of European policy is to empower their economies. Opinions within the EU vary but, in my opinion, investment projects are vital.

Leaving economics aside, the Ukrainian conflict is vital for Europe. What is the EU’s role in this situation? Has it made any mistakes during the conflict or could it have acted better?

Mistakes are unavoidable when such a large-scale conflict emerges as the one in Ukraine. The EU has made errors — especially, lack of dialogue in the first days of the conflict. As events progressed, I realized that we need to join efforts to develop a plan of assistance to Ukraine — to help the country cope with the crisis. The EU, the USA and Russia should have begun talks and financial assistance should have been generated. I still consider that such dialogue should take place, to develop a single scenario for conflict resolution.

The achievement of peace in Ukraine is also important for Belarus. Ukraine is our neighbour with whom we wish to remain on friendly terms. With this in mind, the Belarusian Government is endeavouring to promote dialogue. How does the EU accept this position of our country?

Although Belarus is not an EU member, it enjoys active trade relations with the European Union. It also has close ties with Russia and Kazakhstan. I see no obstacles to enhanced co-operation. We have purely political discrepancies and, I think, these could be settled step by step. Accordingly, my proposal is to create a friendly space in the region, where business co-operation (advantageous for all sides) could be encouraged. To realize this, we need to achieve good, equal-righted relations between Russia and the EU.

Does this mean that you see good prospects for co-operation between the EU and the Eurasian Union?

Yes, I do. However, time is needed to build them. We enjoy many directions for co-operation; each needs development — while signing necessary agreements and creating necessary institutions. It’s better not to hurry, advancing steadily towards our goal. First, we need to sit down to talk, settling our differences. I’m convinced that no side is strong enough to survive alone. We need each other and only need to agree now.