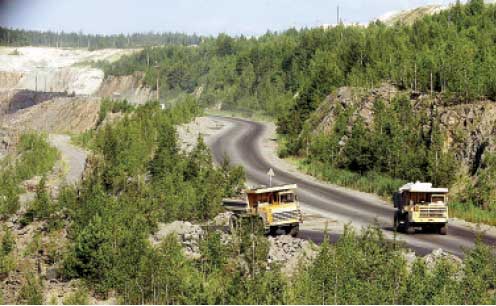 The huge industrial complex of Granit has, in many respects, changed the face of the district. Founded in Soviet times, open-cast mining helped fuel industrial and residential construction until, in 1975, the settlement of Mikashevichi opened its factory. Today, Granit sends nearly 750 wagons of goods to customers.

With Granit shaping the town, Mikashevichi rapidly gained accommodation, roads and social objects. As across much of the former USSR, the life of the town and its residents revolved around one form of work — giving it far reaching social consequences.

Director General Eduard Gavrilkovich manages the enterprise with great efficiency, having worked his way up from being an electrical locksmith, then chief power engineer of open cast mining and to the position of chief engineer. He has headed Granit for two years now. He tells us, “For many of our workers who were born in Mikashevichi, as I was, the city and the enterprise are two halves of one life. If we were not engaged in developing the city we’d lose our identity; it has always been so here. The enterprise has adopted a special programme of professional training for future experts, paying for them to study at institutions of higher education, in the specialities which are necessary for us.”

Mikashevichi is rather a small town but it is growing prettier with time, gaining new homes and shops, asphalted streets and pavements, as well as well-landscaped lawns. “It’s impossible to overestimate the contribution of Granit to the development of the city,” underlines the Chairman of Mikashevichi City Council, Anatoly Davydovich. “Just last year, the enterprise invested Br3bn into developing Mikashevichi. It may not seem much in Minsk but for a town with a population of about 15,000, it’s significant.”

“Our future and that of the city revolves around the building of Sitnitsa mining-and-processing integrated works. It’s part of a Republican programme, confirmed by the President,” adds Mr. Gavrilkovich. “Mikashevichi has enough crushed stone and other building materials at its existing mine for the next thirty years, but open-cast mining at Sitnitsa will provide the enterprise with work for at least another half century. It will also create another thousand jobs, while bringing expanded industrial and urban infrastructure.”

After commissioning the new enterprise, Mikashevichi is set to gain another 3,000 residents and the birth rate has also been growing over the past few years: an encouraging trend, which reflects the quality of life in the district.