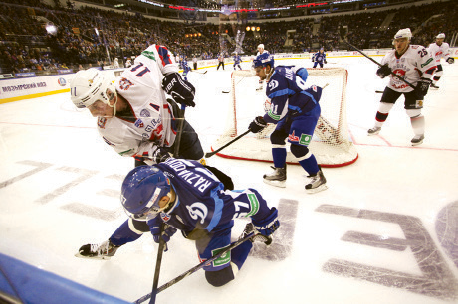 Game against Torpedo was best in series

During the early minutes of the match, Nizhny Novgorod forced goalie Dmitry Milchakov to save two attempts at goal. Meanwhile, the Torpedo players were strong in defence, keeping a close eye on the Minsk team’s top forward, Jonathan Cheechoo. Nevertheless, during the 11th minute, newcomer Cheechoo sent a goal straight into Nizhny Novgorod’s net, using Paul Szczechura’s pass. The seizure of the rivals’ net in the ‘5 for 4’ format reinforced the leadership of Dinamo Minsk players in KHL in ‘efficiency of realisation of the excessive player’. After the meeting with the Nizhny Novgorod players this figure reached 41.7 percent. Cheechoo’s success takes him into equal position with Ilya Kovalchuk from St. Petersburg SKA (who was leading for number of forward points earned in the ‘goal+pass’ system).

Torpedo continued to attack hard but Dmitry Milchakov’s confident play preserved the advantage, and Dinamo defender Nick Bailen (on contract from the USA) distinguished himself twice in the second period: a distant goal from the blue line; and a puck from the middle zone. Outplaying several rivals, he showed how to handle the ice perfectly. In the second and third periods, no more goals were forthcoming, despite some dangerous moments.