This visit continued a series of key foreign political events of late, Minsk having been visited by Chinese President Xi Jinping recently, and Alexander Lukashenko having paid an official visit to Pakistan. 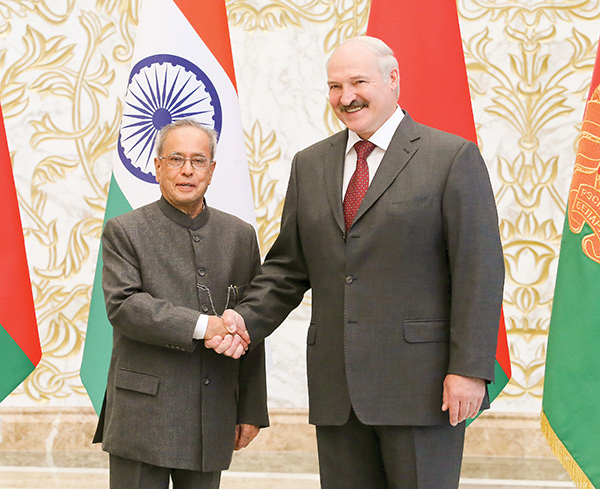 Belarus is known for its commitment to a multi-vector foreign policy, with such meetings as those mentioned above acting as a clear illustration. They reflect our process of trade consolidation (which is gaining momentum), liaising with countries confidently becoming new world economic leaders.

Some time ago, the People’s Republic of China proposed the initiative of the new Silk Road trade zone, involving India, Pakistan, the Eurasian Economic Union countries, and a range of other states. The Chinese Foreign Minister explains the idea, noting that the aim is to provide mutual benefit: ‘a symphonic concert of partners rather than a solo attempt’.

Looking at the map, it’s clear that the intention is to create more than an overland connection between eastern China and Europe, since sea routes are included: across the Indian Ocean, and the South China, Red and Mediterranean seas. This global project could never be implemented alone, even by a very large and rich country; it relies on the collaboration of many, in a constructively-disposed world. Belarus has a key role to play, being the only calm and stable corridor between Europe and Asia in our region. It’s little wonder that the largest countries are eager to engage in dialogue with us.


Minsk not only sees its own interests in India, but is also eager to welcome Indian specialists to Belarus, liaising in the sphere of power engineering and other infrastructural projects. Undoubtedly, such collaboration is beneficial to both states


Communication between the presidents of Belarus and India began with recollections of their first meeting in New Delhi, in 2007, when Mr. Lukashenko visited. This was a catalyst for new dynamics of inter-state interaction. At that time, Pranab Mukherjee was Foreign Minister, creating the foundations of our relationship, to mutual benefit. The Indian President recalled that occasion with warmth, noting the friendly relations which connected India and the USSR and adding his hopes that future partnerships will be just as strong, if not even stronger. He is keen to expand interaction with Minsk, echoing the feelings of the President of Belarus. Mr. Lukashenko underlined that our country has no desire to be ‘isolated’ and is proud of its good relationship with such a powerful state as India.

Further talks concentrated more on business and Mr. Lukashenko told his Indian colleague his view on promising areas of co-operation. For example, boasting contemporary technologies and equipment, Belarusian specialists are ready to take part in the modernisation of Indian mining industry. They can also advice how to enhance the efficiency of oil and gas sector.

In the nearest time, India plans to considerably enhance its level of coal extraction. Of course, it will need to ensure a reliable fleet of heavy-duty dump trucks; our BelAZ vehicles are already working at its enterprises successfully, making them an obvious choice for further supply. Belarus is already setting up a service centre to maintain its machinery, with its first such centre to open later this year in India.

Collaboration in tractor building is also on the agenda, our ‘Belarus’ tractors being well-known in India since the 1960s and 1970s. They helped achieve the ‘green revolution’, which brought significant rises in crop yields from Indian fields.

The ‘Made in India’ governmental programme aims to attract new production technologies into the country, including joint production ventures — such as for the manufacture of buses, trucks, communal and road-construction machinery. Belarus has much to offer in this sphere.


India is also keen to access the markets of adjoining states, as well as organising commodity distribution networks, banking and joint financial provision for projects.

Belarusian has also proposed educational initiatives to reinforce manufacturing success. Another large-scale Indian programme is the Development of Professional Skills, for which Belarus could help train specialists across various spheres, via technical training centres in India.

Minsk is also eager to welcome Indian specialists to Belarus, liaising in the sphere of power engineering and other infrastructural projects. Undoubtedly, such collaboration is beneficial to both states.

The achievements of the Indian pharmaceutical industry are recognised worldwide and Belarus would welcome investments into its own branch, as well as joint ventures in nano- and biotechnologies, microelectronics, machine building and renewable energy. The Great Stone Industrial Park is oriented in this direction, and would welcome high-tech Indian companies.

President Mukherjee asserts that India is very interested in our proposed areas of interaction, being convinced that today’s level of turnover is far from showing our true potential. Meanwhile, India is opening a credit line worth $100 mln, for joint projects.


Alexander Lukashenko believes that trade turnover could double by next year: primarily, by shifting from simple trade to production co-operation. The President of India, Pranab Mukherjee, is also optimistic, hoping to raise the level of bilateral trade to $1 bln within five years


During the second day of the Indian President’s official visit to Belarus, Mr. Lukashenko joined Mr. Mukherjee at the Belarusian-Indian Business Forum. The event hosted substantial dialogue between business representatives from both countries, with contacts signed for future joint projects.

Around 70 years ago, when India received its independence, none could have predicted that this huge, heavily-populated country, with just a few tractors donated by the USSR, would make a phenomenal breakthrough in development. Today, it is the world’s third largest economy, boasting $7 trillion of GDP and colossal potential. Opportunities for Belarusian exporters are endless, so it would be foolish to ignore them. Meanwhile, Indian partners view our country as a reliable economic foothold within the Eurasian space.

Such mutual interest promises beneficial contracts and joint projects, as proven by the attendance of over 40 business representatives from India at the Belarusian-Indian Business Forum, and around 100 Belarusian companies.

The presidents of our two states set the tone, with Mr. Lukashenko believing that trade turnover could double by next year: primarily, by shifting from simple trade to production co-operation. The President of India, Pranab Mukherjee, is also optimistic, hoping to raise the level of bilateral trade to $ 1bln within five years.

Gaining a foothold on the Indian market is no easy job, but those enterprises already working on the task have no regrets, being ready to expand their business. Their success is worthy of emulation. Minsk Tractor Works has signed a co-operative agreement to launch joint manufacture of new tractor models in 2016. The capacity of the Indian market is assessed at around 700,000 units per year: a ‘fertile land’ for MTZ.


Mr. Lukashenko visited New Delhi in 2007, meeting Pranab Mukherjee to discuss measures to be taken to develop ties between our countries. At that time, Minsk and New Delhi intended to triple turnover, bringing it closer to $0.5 bln. This goal was achieved in 2012, when the volume of bilateral trade reached $494.6 mln. Political contacts at top level in 2007 brought genuine business continuation.

Unfortunately, the world crisis took its toll. By 2013, mutual trade had fallen significantly. It revived in 2014 and is now ready for new stimuli, inspiring dynamic interaction between our two countries. The official visit of the Indian President to Belarus should facilitate this.


BelAZ also has solid prospects, since India boasts huge coal deposits. Currently, it imports 200 mln tonnes of coal annually, but hopes to triple its extraction: from 500 mln tonnes to 1.5 mln. Samar Shakil, who manages an Indian dealership branch for BelAZ, tells us, “To achieve this, we need heavy lifting vehicles. Your dump trucks have a good reputation for working under conditions of 50-degree heat, are reliable and are cheaper than those of your rivals. It’s no surprise that many of our clients (who traditionally bought Caterpillar vehicles) are looking to Belarusian machinery.”

Minsk Bearings Plant has signed a beneficial agreement to supply bearings worth $1 bln, while Gomselmash, Borisov Plant of Automotive and Tractor Electrical Equipment (BATE), and Belenergo have also found new partners on the Indian market, supplying machinery and providing after-sales services. We will even be assisting Indian colleagues in the geological survey of oil deposits.

Indian businessmen were able to sample the opportunities and advantages of working in the forthcoming Chinese-Belarusian Great Stone Industrial Park: the perfect venue for high-tech enterprises in the sphere of electronics, logistics, communication, bio- and nano-technologies.


Visits by the heads of China and India to our country, as well as top-level meetings in Pakistan, have been vital components in the ‘distance arc’ of our foreign policy. Communication and friendship with such world giants, undoubtedly, raises the image of our country: as a reliable partner, and as an important player within the Eurasian space


The Government of Javāharlāl Nehrū focused on the ‘economy of knowledge’ and the development of the service sphere, enabling India to see the birth of the IT industry: one of the most rapidly-growing in the world. Belarus also possesses talented IT workers, so collaboration is an obvious step. The same is true of pharmacology. In the next 2-3 years, three joint projects — worth $50 mln — are to be launched in this sphere. Mr. Lukashenko has invited Indian companies to act more boldly, seizing opportunities.

“Opening manufacturing facilities in Belarus, you receive unhindered entrance to the Eurasian Economic Union market, and to that of the European Union. The logistics for working within these two unions are unsurpassed, since Belarus is geographically located at the centre of these economic giants,” underlined Mr. Lukashenko. He assured his guest that no problems exist regarding projects receiving loan funding. During the recent visit to Minsk by the Chinese President, Xi Jinping, an agreement was reached to allocate $7 bln to our country (in addition to the previously opened credit line of $15 bln). The loans are on beneficial, low interest terms, accessible by state and private enterprises. The only condition is that projects be feasible and efficient, to the benefit of all.

Mr. Lukashenko has guaranteed all-round assistance to the Indian capital in our country and towards implementing modernisation at Grodno TPP-2. The latter is a bright example of co-operation, with around $55 mln invested. Its new turbo-power unit has been supplied by Indian specialists, doubling the capacity of the station, and reducing the cost of producing natural gas. This has generated revenue of almost $40 mln per year for the state budget: a good example of collaboration, worthy of emulation.