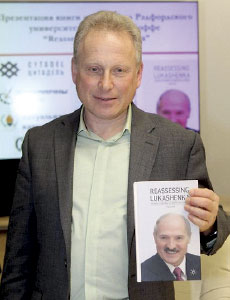 Prof. Ioffe is convinced that the Belarusian President is widely underestimated. He notes, “In my book, I wanted to show the Belarusian leader as citizens here view him, rather than from an outside viewpoint. It’s generally held that a politician influences society, but I rather think the opposite: that a political leader is largely the product of the society being headed.”

Reality does not operate in clichés, as his book emphasises. Speaking at the presentation in Minsk, Prof. Ioffe noted, “Mr. Lukashenko began by heading a country less prepared for statehood than other post-Soviet countries. During his presidency, a feeling has emerged that Belarus is a sovereign and independent state. Alexander Lukashenko is a father of Belarusian statehood, consolidating those loyal to him and his enemies. He is positively assessed in the country’s history. My goal is to show a more balanced image, free from the usual clichés.”

Prof. Ioffe regularly writes about Belarus for Eurasia Daily Monitor magazine, run by the Jamestown Foundation: increasingly popular among English-speaking audiences since Minsk’s hosting of the contact group on Ukraine conflict settlement. He believes that the level of awareness of Belarus leaves much to be desired in the West, especially in America, so his book aims to improve the situation.

The Minsk presentation became an expert round table discussion, with Mr. Ioffe detailing the most urgent contemporary issues. In his opinion, a major reason for the Ukrainian problem is that Ukraine, unlike Belarus, lacks a ruling elite concerned for national interests. “The country is torn by oligarchal interests, which has greatly aggravated the cultural split long existing in Ukrainian society, and reflected on electoral maps. However, this split shouldn’t have led to kin-on-kin war; it’s a tragic situation,” he underlined.

The American praises the Belarusian model of economic and social management. He comments, “Russia is one of the world’s richest countries in terms of resources while Belarus is much smaller territorially and is poor in resources, except for potassium — for which the country controls the whole cycle of production. The rest is the result of labour and brains. Mr. Lukashenko manages Belarus’ everyday regime. He is involved in geopolitical manoeuvring not because he is cunning but because this is a vital necessity. Look on the state of Belarusian roads, small and medium-sized towns and fields. Neighbouring countries began with the same but it’s now as if they are on different planets. Much that exists in Belarus is worthy of praise.”