Pervana Myradova was born in Ashgabat, but now dances for the National Academic Bolshoi Opera and Ballet Theatre

Pervana Myradova was born in Ashgabat, in Turkmenistan, but now dances for the National Academic Bolshoi Opera and Ballet Theatre

She is yet to dance the rolls of which ballerinas dream, being only 19, and having only graduated this August from the Choreography Gymnasium-College in Minsk. Pervana Myradova was born in Ashgabat, in Turkmenistan, but now dances for the National Academic Bolshoi Opera and Ballet Theatre. Her first main role has been in Swan Lake, within the group of four small swans.... Asked whether she is happy, her face lights up with joy and she declares, “Oh, yes!” It seems that no other answer is possible, since she has dreamt of working at such a theatre since college, where she spent eight long years. She has already fallen in love with Minsk, walking around Nemiga and the Troitsky Suburbs by night, when the city is lit so beautifully.

Of course, she has dreams. One day, she’d like to play Odette-Odile in Swan Lake, watched by her parents. Naturally, Nurdzhemal Amannazarova and Charyyarhodzha Myradov are proud of her, as is her favourite teacher, Irina Mergenova. The role is the ultimate test for any ballerina.

People’s Artiste of Belarus Yuri Troyan, the Art Director for ballet at the Bolshoi Theatre, is pleased with the young ballerina, while noting that she needs to build her strength and remain determined.

I can’t help mentioning her eyes, which have such depth. They sparkle with pleasure, as they only can when you are young.

What brought you to Minsk?

I was 10 years old when I arrived from Turkmenistan in Belarus, and entered choreography college, which I chose having read good reviews online. Well-known ballet dancers Ivan Vasilev, Igor Kolb and others graduated from here.

Did you dance from childhood?

I didn’t think about ballet, and I didn’t dance in front of the mirror, as other girls tend to do. I studied at an ordinary school and my parents had no links to the arts. My mother is an anaesthesiologist, while my father is a customs officer. A friend of my mother, Irina Abdyevna, showed me films of ballet performances, which ignited my interest. I was nearly 7 years old when she began teaching me. I didn’t have any special potential but I was persistent, so all went well. It helped having such a teacher. Then, I prepared to enter college and Irina Abdyevna accompanied my mother, bringing me to Minsk.

When do you realise that wanted to pursue ballet as a professional?

It came upon me gradually. At first, I simply worked mechanically: I was very young and didn’t understand the emotional side. It was only when I was older, at college, that I realised how much of myself I needed to reveal through dance, so that audiences would see my soul, rather than the mask of my face. Our teacher, Nina Davydenko [People’s Artiste of Belarus] taught us not only how to move but how to show our feelings.

How did it feel to see such public interest?

It began in college, when I danced Masha in ‘The Nutcracker’. I understood then that there’s a relationship with my audience. It’s a great feeling: a true exchange of energy.

So, you came to the Bolshoi Theatre after college. Who recommended you?

One year before graduating from college, Yuri Troyan came to select girls for training. He saw me and invited me to visit the theatre, with others. We watched performances and danced. In March 2015, I and one other ballerina were offered a place, which was wonderful. I agreed, as I like your country, and I like Minsk. I like Belarusians; they are so benevolent, sympathetic and hospitable.

Did your parents object?

Not at all, they see the theatre as a gift from Fate.

You must miss your home… how often do you fly to Ashgabat?

When I was younger, of course, I missed it. Sometimes, my mother came to visit, and sometimes I came home. So, we saw each other twice a year. Now I go home only once a year. I haven’t seen my older brother, Ezber, for a long time, as he’s studying management in London, at university.

Do you ever think of returning to Ashgabat? The city is said to be very beautiful…

Ashgabat is beautiful, as is Minsk. When I started my studies, it was really hard without my parents. I wanted to return home, although I didn’t let them know. They had faith in me and were relying on me to do well, so I didn’t want to let them down, nor Irina Abdyevna. How did you bridge the language divide?

I knew Russian, having studied at Russian school. Probably, my mother had a presentiment that it would be useful to me in the future.

Tell us about your first days with the Bolshoi Theatre.

At first, I was very scared, as I had to be much more independent, and think for myself. I realised that it’s easier to study than to work.

Who else came here from college? How did the theatre receive you?

Four of us have entered here from my class, and I’m friendly with them all. I rent a flat with a Japanese and a Korean girl. We’ve been treated kindly, and with patience, while we learn to fit in. The others in the troupe probably remember how they felt at first. The teachers have helped us too; the Bolshoi Theatre has outstanding teachers. It’s been very pleasant to work with ballet masters Aleksandra Tikhomirova and Tatiana Yershova. I’ve quickly begun to feel relaxed and confident, and to enjoy the lovely atmosphere.

In your opinion, why is Belarusian ballet so great?

It has a rich history and is famous worldwide for its professionalism, often touring. I sometimes hear from experienced ballerinas how they’ve been received abroad, with great appreciation. While at college, I was delighted to see such performances as ‘The Creation of the World’, ‘Carmina Burana’, and ‘Romeo and Juliet’. I admired Lyudmila Khitrova, Yana Shtangei, Aleksandra Chizhik, Irina Yeromkina and many others. Strong and beautiful, they inspired me to become like them.

Are you comfortable dancing on the stage of the Bolshoi Theatre?

Certainly! Everyone tries to make us feel comfortable, saving us from twisted ankles by applying colophony to make the floor less slippery. 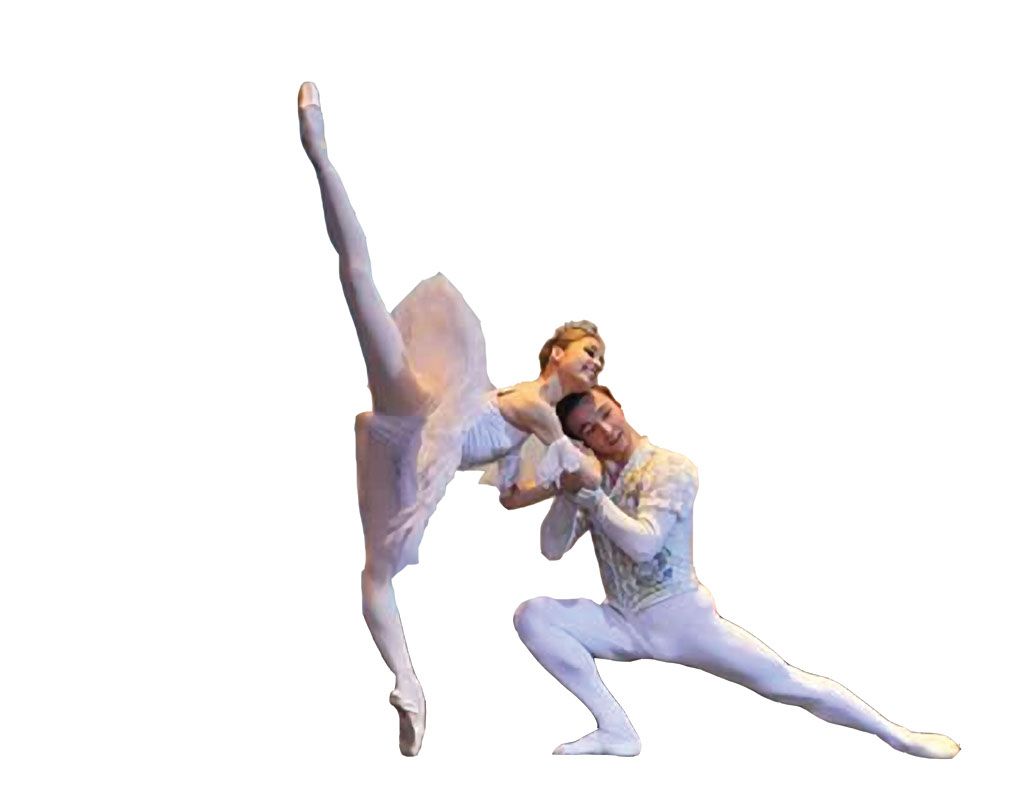 Which was your first performance with the Bolshoi Theatre?

A one-act ballet called ‘Serenade’, by Balanchine; I danced in the corps de ballet. Yesterday, I appeared on stage within a group of four soloists.

Do you view ballet as hard work?

Yes. Sometimes, you need to endure pain, without letting it show. I’m patient by nature. Of course, if a show goes well, then you can’t help but feel satisfied.

Some view the corps de ballet as the face of a ballet troupe, since soloists don’t always maintain their level. Do you agree?

You were a bird among six other birds?

Yes. I loved the performance. The staging and costumes were amazing.

What’s your favourite move in ballet? And your least favourite?

I like poses, such as the arabesque and attitude, and love seeing the men jump, soaring through the air. Sasha Chizhik manages this very well. I’m yet to achieve high jumps, although I’m working on them. I have no right to dislike any ballet move.

Do you prefer modern or classical ballet?

My soul and body are predisposed to classical rather than modern. I feel that the latter fails to convey the same depth of feeling: love, passion and femininity.

Do you need to prove yourself, to become a soloist?

I have much work to do and must be determined. Yuri Antonovich has been giving me some solo roles, so I can show what I’m capable of. Dancing in a group of four is the first step on the way to becoming a lead soloist.

Would you like to see a ballet staged especially for you?

What plans do you have for the future?

First, I’d like to become successful in the theatre, and then enter the University of Culture’s pedagogical department, studying remotely, to become a choreographer.

Whose idea was it to call you Pervana and what does it mean?

My mother gave me this name. In Turkmen it means butterfly or moth. In its short form, Peri, it means angel.

Thinking of your flat share, with three nationalities of cuisine, what happens in your kitchen?

We have a mutual understanding in the kitchen. Korean Yunzi Lim often prepares gimbap, which is rather like Japanese sushi, while Japanese Urabe Kurimu makes a good soup. I prepare pilau rice.

I’ve eaten them since childhood. I also like cakes and don’t hold back in eating them! 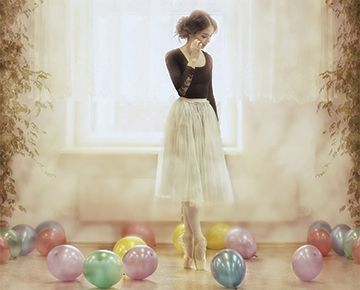