Belarusian-Chinese relations serve as an example in world diplomacy

What is necessary for a successful business? There can be many answers; however, everything starts from unconditional trust between partners. In this context, Belarusian-Chinese relations serve as an example in world diplomacy. In an historically short period of time, Minsk and Beijing have achieved an all-round strategic partnership and are now ready to accelerate the rate of co-operation by joining regions. This was confirmed at a meeting between the President of Belarus and the delegation of the People’s Government of Hunan Province, headed by Hu Henghua. 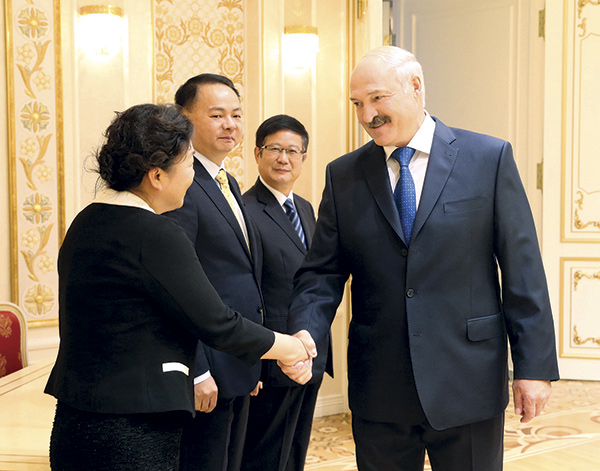 
The use of the word ‘province’ doesn’t clearly reflect the scale of the potential contracts. Almost 70m people live in this region, in the south-east of China — 1.5 times more than in Ukraine — while its GDP level has reached $450m — six times greater than our own. It would be irrational to lose such a market, and Alexander Lukashenko stressed its importance when speaking to his guests, “This visit is special, taking place in the run-up to the top level meeting with Chinese President Xi Jinping — scheduled for September. These talks are expected to lay the foundation of a brand-new stage in Chinese-Belarusian partnership — the implementation of large-scale investment projects that will have a huge impact on the work of business circles from the Hunan Province and Belarusian regions.”

The Chinese Zoomlion Corporation has already become the pace-setter of such a collaboration. This transnational corporation with the global reputation and advanced technology specialises in the production of machinery for agriculture, power engineering and construction while having subsidiary enterprises and research institutes in 80 countries. The company has been working in Belarus for more than a year already and has received a good impression, facilitating its desire to continue investing.

Alongside the creation of industrial prototypes of construction and communal machinery on the basis of the MAZ chassis, joint projects have been already launched with MTZ and Gomselmash aiming to expand the model line-up of machinery for both European and Asian markets. Moreover, this will be primarily new machinery for us. The Chinese partners are also eager to settle in the Great Stone Chinese-Belarusian Industrial Park.

The project dealing with the production of fire trucks is planned for the next five years. The President also suggested developing the industrial potential of the Mogilev Region with the attraction of leading enterprises from the Hunan Province. The benefit is mutual, since our plants will receive investments — so necessary for their development — while China will expand its presence in the states of the Eurasian Union and Europe.

Meanwhile, Mr. Lukashenko promised, “We guarantee Chinese companies maximum favourable conditions for doing business.” Every investor would like to be given such guarantees from the first representative of the state.