Some believe that Polesie is the ancestral home of the Slavs, from where they moved to new lands

Some believe that Polesie is the ancestral home of the Slavs, from where they moved to new lands.

Some believe that Polesie is the ancestral home of the Slavs, from where they moved to new lands. They say that Kirill of Turov was born there: perhaps the author of Old Russian literature’s Tale of Igor`s Campaign. Whether true or not, wild Polesie certainly feels like ‘the edge of the world’. 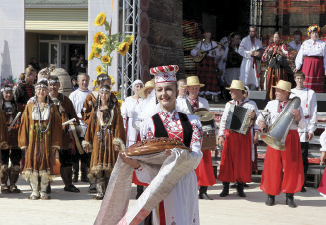 The 3rd International Call of Polesie Folk Festival was recently held in the agro-town of Lyaskovichi, in Gomel Region, uniting not only the eleven districts of Gomel and Brest regions (of original Polesie) but participants from Russia, Ukraine, Poland and, even, China.

Alexander Lukashenko welcomed participants and visitors of the holiday, noting the symbolic character of the forum receiving international status during the Year of Hospitality in Belarus. He asserted, “Polesie’s land is unique, being a treasury of ancient ceremonies, crafts and folklore; its inhabitants are notable for their huge diligence, sincerity and special sense of humour. The festival helps us to realize our role in modern world culture, uniting our efforts to study and preserve our invaluable historical heritage.” 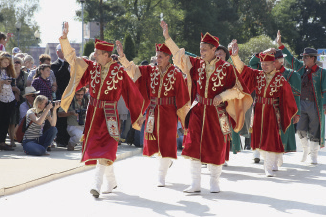 Polesie still boasts its original crafts, ceremonies and costumes, with nuances across various settlements. Each adds its own fragrance to the bright bouquet, as evinced at the Call of Polesie festival. Every year, its programme grows richer and more diverse. This year, farmsteads from across Gomel and Brest regions organized a trade fair, stretching for 1.5km along the River Pripyat, filling tables with food, allowing visitors to sample tasty produce. Meanwhile, craftsmen invited people to try their hand, under close supervision, to make a souvenir. Competitions, entertainments, music, horse riding and Pripyat River cruises were among the most popular pastimes, while only the bravest dare go up in the balloon which was tethered. 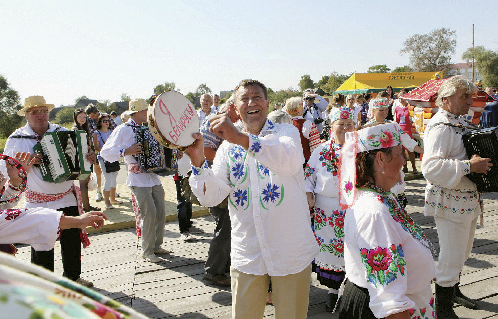 The ‘Polesie Games’ were an innovation of the festival, with a photo exhibition first taking place, showcasing portraits of the most famous Polesie residents. Moreover, the title of Honorary Polesie Resident was awarded — for significant contributions to the socio-economic development of the Pripyat River Polesie area, as well as for the preservation and revival of cultural traditions. To storms of applause, winners of diplomas, statuettes (called Belarusian ‘Oscars’ by the journalists) and Slutsk belts were announced. Those awarded included the President of the Republic of Belarus Alexander Lukashenko, named an Honorary Polesie Resident. The honour also went to the Director of the National Academic Orchestra of Symphonic and Popular Music, Mikhail Finberg, and to the Director of the Wooden Sculpture Centre from the Stolin District’s Tereblichi, Ivan Suprunchik. Finally, the Director of the Pripyatsky National Park, Stepan Bambiza, was also given the title. Meanwhile, eleven local ladies entered the Polesie Beauty contest, held for the first time; no Alesya was among them (as in Alexander Kuprin’s story of the same name, and in the song by Syabry). However, the women of Polesie are certainly bewitching, beautiful and clever. The winner was Valeria Volynchits from Luninets. Also the innovation of this year was a photo exhibition of portraits of well-known Polesie residents. One was even awarded the title of Honorary Polesie Resident. 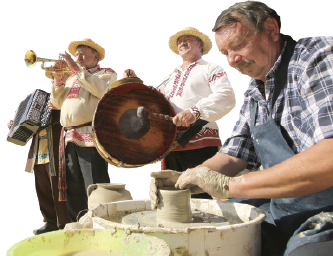 The Russian North Chukotka song and dance group gave an original performance. Soloist Olit Tevlyanaut noted that she has visited Gomel Region before but that each time she discovers something new. Cheng Hao from China received a great ovation for performing Kupalinka in Chinese, having endeavoured to create a ‘bridge’ between China and Belarus in this way.

Ukrainian ensemble Chip was received with special warmth, since Ukraine is a neighbour and sister to Belarusian Polesie residents. Group leader Oleg Shishuk noted, “Ukraine is in crisis, but human ties and our friendship will help to overcome it. The Call of Polesie festival is held every two years but its popularity is ever growing, with more people wishing to participate. It could be that the event will one day become annual.