Openness and impartiality are welcome

I entered my polling station in Chekhov Street with a special feeling: my son used to study at the school which now houses the polling station, bringing positive feelings for this place where my countrymen were making their choice on that day. After performing my civil duty and chatting to teachers we know, I decided not to indulge in nostalgia by visiting the neighbouring polling station in Griboedov Street. I could hear professional music, coming from the Minsk State Musical College. Its pupils can perform Beethoven’s Ode to Joy, which is the anthem of the European Union and the Council of Europe. 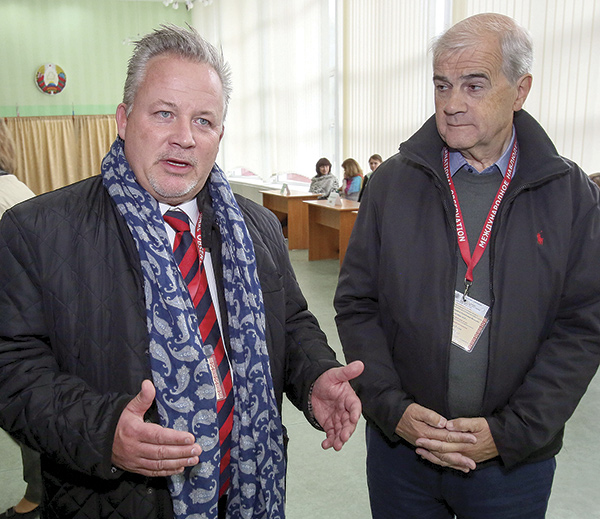 This thought wasn’t accidental, as my colleagues had informed me the observers from the OSCE Parliamentary Assembly should pay a visit exactly to this polling station. It happened so that almost on the doorstep, I faced Mr. James Walsh, the Head of the OSCE Parliamentary Assembly Delegation, as well as Kent Harstedt, Special Co-ordinator and Leader of the Short-Term OSCE Observer Mission.

“How do you like our holiday?” I asked with a smile after the greetings.

I get the same laid-back, friendly response from James Walsh, the head of the delegation, “It was impossible to see the whole city, but all we have seen is wonderful. A lot of meetings take place, including with the representatives of the media and other organisations. Of course, people certainly looked very relaxed and calm.”

However, such high ranking politicians are not the people with whom you can communicate on the move, so I ask politely to take few minutes to answer my questions. Despite the harsh prejudice accompanying press officers that supposedly journalists will get all the answers at a press conference on Monday, Mr. James Walsh and his colleague Kent Harstedt demonstrate openness to dialogue.

This episode seemed to me very important. Yes, the European observers will cover mountains of paper with writing, noting all features and intricacies of the elections. However, manuscripts are dead, unless they are not worth a European soul. The one which is sung in the Ode to Joy and that today should manifest itself in a Europe-wide solidarity, especially taking into consideration what is going on throughout Europe nowadays. This is the main question which I’m going to address to my interlocutors

Thank you very much for the opportunity to ask questions. The OSCE Parliamentary Assembly is a very important structure in the implementation of the European dialogue. Please tell me, how do you assess the process today and how the Minsk peace process has improved the dialogue?

This is a very big question; we can welcome the role played by Minsk as a site for peace talks. Of course, we are here because the elections are held. But I do not think anyone would mind if I say that the role played by Belarus as a host country of the talks was great. Of course, for Belarus a lot is at stake, so that in a region that surrounds it, peace and tranquillity will come.

Can we talk about mutual openness?

Of course. I think that the European countries want to be open not only for Belarus, but for many other countries. However, it must be something that is based on the fundamental principles. Meanwhile, I will not go into details, as I’m here to observe the elections, and we are not discussing politics. I think people in Europe want to see a good life in Belarus.

I think that in Europe we have seen the consequences of many conflicts in the Middle East, and in Ukraine, and we’re very concerned about this. We welcome the positive step Belarus has taken to host the peace negotiations. Of course, Belarus has attracted a lot of public attention, conducting such negotiations; however, it is important to say that now the attention is riveted to Belarus in connection with the elections. We want the elections to be held so that we could tell something good in the end and to avoid the events that took place in 2010... So attention that Belarus has now received, could not be neglected by anyone.

Thank you. We agree in the fact that we want to tell only good things to each other.