Open view on the changing world

They say that the economy is used primarily for political progression. Meanwhile, Belarusian diplomacy has a different construction.

They say that the economy is used primarily for political progression. Meanwhile, Belarusian diplomacy has a different construction. We boast our own view on the world order. We don’t claim to bring this view to the planet as the only correct one. We really assess our potential as a subject of international relations. Nevertheless, there are enough countries on the Earth who share our position, and the commonness of political views leads to the development of a trustworthy dialogue which serves as a basis for mutually beneficial business interaction. 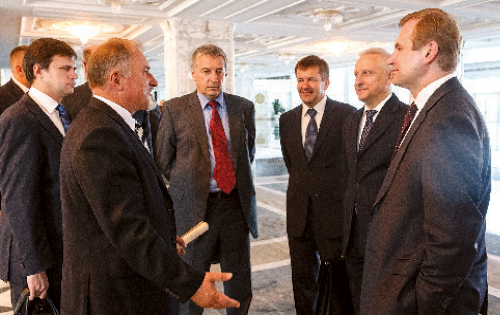 
Our major interest on external vectors is the economy. Such construction was built a long ago, and its relevance was proven during the meeting between the President and Heads of the Belarusian missions and consular establishments. This is a traditional event; some tactical corrections are necessary from time to time, though common principles of Belarusian foreign policy remain unchanged. The world is not a static place; it’s changing, and this is happening extremely rapidly nowadays. The peculiarity of the current stage is the growth of tension, because of the actions of the world’s leading players. Power methods, open pressure, economic and resource advantages, double standards and imposition of their own model of development are doubtful instruments which are being employed more and more frequently. As a result, foreign policy and diplomacy cease to be synonyms.

Under such conditions states, similar to ours, have to find non-standard solutions in order to fit into the existing geopolitical reality. And we do succeed. Due to a multi-vector policy, we’ve managed to set up strong collaboration with most countries of the world. They know and respect us as an independent and proud State, able to counteract even the most powerful pressure. The President told how, next year, pressure will predictably increase, as the presidential election campaign is a very responsible moment. Of course, nobody will arrive to us in tanks, yet the application of so called ‘soft power’ will raise many-fold. We’ve already seen this, and now see bitter lessons of our brotherly Ukraine. We’re able to make the conclusions.

This is the objective background of all processes which will be taking place in the country soon. Therefore, diplomats need to make corresponding amendments in their activity. The economy is still a priority, and here we need to promote our interests in close co-operation with subjects of the real sector. It’s difficult to compete with trans-national corporations, but it is possible. The President gave a simple example — many times, our manufacturers have found counterfeit copies of their Belarus-made goods in various corners of the world; bad products are not faked.

Meanwhile, Mr. Lukashenko paid attention to the fact that there’s not a single embassy that has been stably fulfilling their tasks during the last five years. The function of the diplomatic missions shouldn’t be focused on theoretical recommendations. They should become gatekeepers of the interests of our enterprises on the foreign market; show on which doors to knock and with whom to speak. Meanwhile, the factories’ marketing departments shouldn’t be passive either. Close and dynamic collaboration is vital here.

The Ministry of Foreign Affairs has to quickly manoeuvre with staff resources. The potential for significant expansion of the diplomatic network is almost exhausted. We’re already present in all corners of the planet. We need to promptly respond to the changes of the market situation, and special attention should be paid to the countries where our ambassadors are accredited on concurrent. Their economies aren’t completely open for us yet.

Other landmarks are known. The President set the task of activating our efforts and actions in designated areas, including to enhance the quality of the staff composition, to realistically assess the prospects and goals of enterprises’ modernisation, to optimise commodity distribution network, to optimally load built transport and logistics centres, and those still under construction, to efficiently allocate assembly production facilities around the world (with an aim for further deepening of localisation), and to attract direct foreign investment.

The strategic goal is the further diversification of exports — both in the range of goods and the geography of supplies. There’s no need to be afraid of remote markets. The examples of China, Venezuela and a number of Arab States prove that distances aren’t a hindrance for interaction. Nevertheless, our closest neighbours shouldn’t be put into second place. Russia, Ukraine and the EU are our traditional and important partners. We live together, and this obliges us to normal co-operation, both in the bilateral format and in the context of integration unions. The created Eurasian Economic Union opens up enough new opportunities for this.
The quality of goods is under special attention. It’s unacceptable to damage ourselves in this factor while entering new markets. In this respect, Mr. Lukashenko ordered the preparation of a special session at the level of the President.

The session saw the reports from Prime Minister, Mikhail Myasnikovich, the Minister of Foreign Affairs, Vladimir Makei and a number of ambassadors. The general impression is that the Government and diplomatic service see the essence of the existing tasks while also boasting the necessary instruments for their solution. Having no doubts in the quality of Belarusian diplomacy, Mr. Lukashenko expects more dynamism in its work. He noted that an ambassador is the representative of the President in a particular country, and they should act decisively and promptly. All critical remarks, voiced during the meeting will be generalised, and the result will become the basis for a ‘roadmap’ of activity for our foreign establishments as soon as possible.

Over recent times we’ve managed to more constructively build dialogue with the USA, and anti-Belarusian rhetoric from our constant critics — Poland, Sweden and Germany — has significantly lessened. The EU has begun to speak directly with Minsk. Our major task today is routine work, aimed at creating a positive atmosphere in relations with the EU and the USA. The whole policy should be subjected to the promotion of our national, primarily economic, interests.

Igor Petrishenko, the Ambassador to Russia:

A new tendency has appeared in Russia — to make one’s own economy self-sufficient. At the same time, those sectors where Russia will concentrate State support will become points of growth. It means that our primary task is to ensure our presence in such points of growth.

Valentin Velichko, the Ambassador to Ukraine:

In recent days, too many questions have arisen regarding Ukraine’s decision to introduce customs duties in respect to a range of Belarusian goods. Such a decision has been made, but it hasn’t entered into force. I think we’ll manage to solve this problem. In this case, I wouldn’t use such definitions as ‘an unfriendly step’, ‘return measures’, etc. We are neighbours, and we have more than a thousand kilometres of common border, as well as common Slavonic roots. Moreover, Belarus accounts for 6 percent of Ukrainian imports. We boast huge reserves, and some tensions can be written off as emotions.

Alexander Averianov, the Ambassador to Poland:

Cautious hopes have now appeared to normalise the relations with Poland. We’re neighbours, and have to behave as neighbours. The activity of an inter-governmental commission on border co-operation has been recently renovated. Poland has evidently rethought its relations with Belarus against the background of Ukrainian events. On the one hand, it views us as a partner in ensuring regional security; while on the other hand, it perceives Belarus as a link in the chain of promoting its interests to the East. Here, it’s essential to activate work in those areas where our interests coincide.

Andrei Savinykh, the Ambassador to Turkey:

By 2023, Prime Minister Erdogan sees Turkey in the top ten leading economies of the world and an influential regional centre of power. For us, this is a source of new opportunities, since the Turkish market is rather capacious. Industry has appeared, while they still lack the science. There are prospects in organising joint scientific research. Moreover, half of the Turkish population are people under 20, and they understand well that education is the key towards their life success. However, at present, Turkish universities are unable to satisfy the existing potential, so we’re eager to invite them to Belarus.

Andrei Molchan, the Ambassador to the SAR, Angola, Zimbabwe, Mozambique and Namibia:

It’s especially vital for me to hear in the President’s speech that the country’s leadership pays big attention to the development of relations with African States. Our experience in achieving food security is of primary interest for the countries, located in the south of Africa. For them, the number one problem is to feed their people. The second issue is the creation of working places. Wars have ended there, and countries have begun to think about the establishment of their industry, the provision of energy security and the construction of houses, roads and ports. We have answers to all these questions.

Alexander Korol, the Ambassador to Lithuania:

Many Lithuanian companies are operating in Belarus. In my opinion, it’s necessary to work with Europe in a more consolidated manner. For example, we assemble buses in Poland and tractors and trucks in Lithuania. If we speak about the European market, we need to unite our efforts, including in the sphere of promoting supplies of Belarusian goods inside the EU.
Заметили ошибку? Пожалуйста, выделите её и нажмите Ctrl+Enter