This year, as the world marks the 70th anniversary of the end of the Second World War, we not only remember the millions who died in those terrible years but also  calculate the loss of culture: destroyed architectural treasures and art works, burned libraries, and looted museums. Rarities beyond number were turned to ashes or went missing in the flames of war. One tragedy of such a kind was the destruction of the 16th century Church of the Annunciation of the Holy Virgin, in Supraśl, mourned by Belarus and Poland.
Supraśl is a small town: at various times, part of the Grand Duchy of Lithuania, the Belarusian Soviet Socialist Republic, the Russian Empire, and the Republic of Poland. Since 1944, it has been part of the territory of Poland, while being home to a number of Belarusians, Orthodox believers, and people of other nationalities. It is unique, combining the traditions of various European cultures.

The local church has been recently renovated, healing some of the wounds inflicted by the war, although not removing every scar. Priceless frescos were lost, with only fragments rescued: mere echoes of their former beauty, though enduringly valuable. The Church in Supraśl, despite being situated in Poland, is included in all studies of the history of Belarusian medieval art, having been a hub of spirituality.

I’ve always wanted to see the masterpiece with my own eyes and am now standing before the walls of the church: rebuilt exactly as it once appeared almost 500 years ago. Similar Orthodox churches exit in Synkovichi and Murovanka, and in Vilno, the capital of Lithuania: Holy Trinity Church, the Church of St. Michael the Miracle Worker and of the Holy Virgin. All date from the 16th century and are Gothic in style — common in Western Europe but rare for Orthodox churches. Of course, Belarus lies adjacent to Poland and Lithuania, straddling two civilizations: Western and Eastern Europe, Catholicism and Orthodoxy. It’s a crossroads for many phenomena, including art styles. 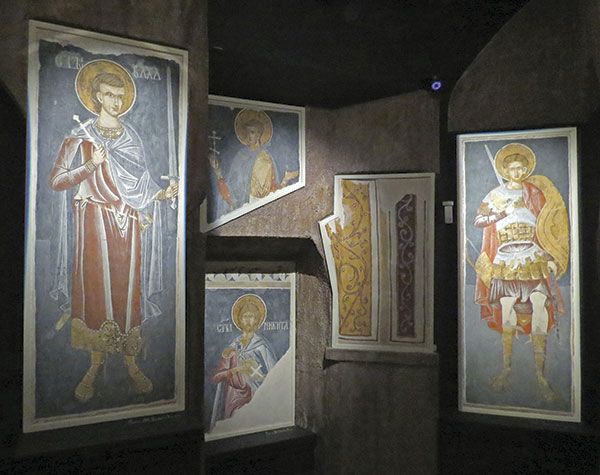 Masters from Serbia painted the Gothic church in the traditions of Byzantine art, and it was first inhabited by monks from Ukrainian Kiev and Greek Athos: a real international community. In 1582, the Serbian Patriarch Gabriel stayed, indicating the importance of the monastery, and granting the high rank of ‘lavra’. In 1589, Jeremias, the Patriarch of Constantinople, visited this heart of spirituality and, in 2012, the Patriarch Kirill of Moscow and All Russia did the same.

The monastery’s library held a copy of the ancient Slavic Supraślsky Codex, recorded in the 11th century. It was later rediscovered, in 1823, by Mikhail Bobrovsky and, between 1838 and 1839, he sent the manuscript to Slovenian philologist Jernej Kopitar, for publication. A section of the rarity went to the National and University Library of Ljubljana while another went to Warsaw. In November 1939, it was appropriated and taken to Berlin but returned to the Polish capital in 1941, before disappearing without trace in 1944. However, in 1967, it was located in the USA and returned to the National Library of Warsaw. In 1856, several fragments came to St. Petersburg, where they remain today. The Supraślsky Codex is listed by UNESCO World Heritage.

Other no less valuable church relics were taken to Russia in 1915, and some were stolen during the world wars. Between 1693 and 1803, the monastery’s printing house released about 500 editions: religious and secular — in Polish, Church Slavonic, Old Belarusian, Latin and Lithuanian. For several centuries, Supraśl has extended its influence beyond the borders of Poland and Belarus.

Walking through the streets of the settlement, from the Orthodox church, the road leads to the former Protestant church, behind which stands a Roman Catholic church and several private homes dating back a century and more. Prynuka restaurant’s Belarusian cuisine evinces the presence of a local Belarusian community, just as Tatar Prysmaki restaurant indicates the presence of Tatars (in fact, for the past five centuries).

Also near the border with Belarus is Polish Biała Podlaska, a place of close historical and cultural ties. The Consulate of Belarus is situated in the town, which boasts Old Catholic, Orthodox and Jewish cemeteries, filled with Poles, Belarusians and Jews. Still standing are an Orthodox church, and several Roman Catholic churches, some dating from the early 17th century. In the heart of the town is a monument to Polish writer Józef Ignacy Kraszewski, born in Belarusian Pruzhany, who spent his life in Lithuania, Ukraine and Poland. From 1822 to 1826, Kraszewski taught at the town’s prestigious Biała Academy. Nearby the school, you can see the ruins of a former castle owned by the noble Radziwill family: the most famous in Belarusian history. Its gates, tower, some household buildings and chapel remain, all dating from the 17th century and after. The Belarusian Radziwill residences in Mir and Nesvizh are included in UNESCO’s World Heritage List and, although the Biała residence is more modest, it is worthy of a visit.

The rich cultural traditions of Belarusian-Polish border region are a source of cross-border tourism, while the route from Supraśl to Biała Podlaska takes the traveller through Knyshinskaya Forest Reserve. Onwards a little further, and you reach Bialowieza Forest, which is UNESCO World Heritage listed. The ancient forest unites Poland and Belarus, straddling both territories and being open to citizens of both countries. The President of Belarus recently signed a decree to allow visa-free entry via Pererov (Bialowieza) checkpoint for Polish tourists for up to 72 hours (3 days), making visits much easier to arrange. Vadim Karmazin, who heads Tourism Department at the Ministry for Sports and Tourism, notes that Belarus is eager to welcome visitors and views the forest as a calling card.

In the future, as visa free entry is expanded, entry to other regions of our country should simplify. Belarusians should find their visits to Poland equally facilitated, allowing citizens to enjoy Supraśl and Biała Podlaska, while Poles enjoy Ruzhany, Merechevschina and Volkovysk.