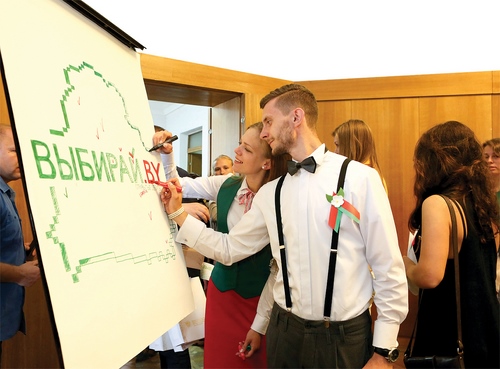 Vybirai.by! will be a discussion venue for Belarus and the international community

Debates have become a popular enhancement to open dialogue. The format of an organised debate allows the participants to share their thoughts and ideas and also to defend their views in the face of opposition. During the debate, the candidates may present their ideas using a variety of methods, some even preferring to use the language of film or singing! Often social networking sites are used to gather support and open the debate to a wider audience.  Schoolchildren and state officials are invited to take part in competitive debates, acting independently or in teams.

The First Secretary of the Central Committee of the Belarusian Republican Youth Union, Andrey Belyakov, explained the choice of theme, “As important public political events are approaching, we’ve decided to remind our youth that the country’s future depends on them. It’s crucial to be able to defend a point of view, finding the necessary arguments and appreciating the many complexities of some problems. We hope that Vybirai.by! will become a discussion venue for both Belarusian youth and the international community.”

When discussing Belarus’ burning issues it seems sensible to listen to the opinion of experienced and recognised personalities. The first session is to be attended by the Information Minister Lilia Ananich, the Aide to the President for Physical Culture, Sport and Tourism Development Maxim Ryzhenkov, and the Editor-in-Chief of the Sovetskaya Belorussiya newspaper Pavel Yakubovich.

The media’s attention to the project is not accidental. Ms. Ananich has named Vybirai.by! a new venture in the history of the youth movement and mass media who share a common goal of promoting the state’s true values. Topics for future meetings are already being prepared. A BSU student, Alexander Pashkevich, plans to discuss the development of small cities. Born in Slutsk, he is interested in supporting talented young people and the development of youth sports. Mr. Yakubovich, in turn, is concerned with the two issues of ‘nationalism and internationalism’ and ‘youth and mass media’. He is ready to participate in their discussion.

The project will last for six months, with open debates to be hosted by organisations, enterprises, schools, colleges, universities, public associations and military unions. They will later move to districts and cities, with regional centres and the city of Minsk coming next. The most talented and skilful opponents will meet in the finals, scheduled for this autumn.
Заметили ошибку? Пожалуйста, выделите её и нажмите Ctrl+Enter