Olga Zlotnikova. In poetry and prose

The young poetess’ online poems are already proving popular, drawing a huge number of hits. While many of us write poetry as a casual hobby, some feel it so deeply that it is engraved upon their bones. They pursue it at all costs, regardless of material benefit. Olga Zlotnikova is one such. 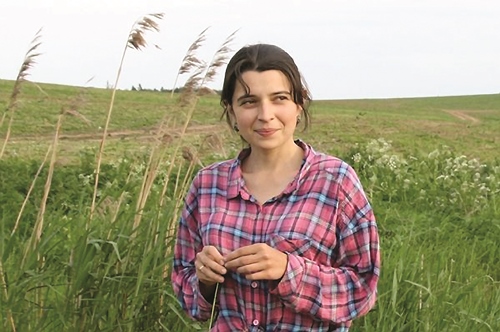 Her father had a career on TV, and her mother and grandfather were artists. “Until I was about 11, I used to draw,” she recollects. “I gave up but, at the age of 25, began making abstract compositions and portraits — mostly for my own relaxation. Creating poetry is an emotional process, taking a great deal of energy, while drawing with pencil, charcoal or crayons brings relaxation. All artistic pursuits are restful until you pursue them professionally,” Olga comments.

For family reasons, Olga became independent early in life, finding her own path. She entered the Belarusian State University’s Historical Department but, a year later, realized that her interest lay elsewhere. She chose then to try Philosophy and Librarianship at the Culture University.

“I studied hard and received an increased scholarship but failed to graduate, as I married and gave birth to a son. Later, my second son was born,” she smiles. After Mikhail (her elder son) was born, Olga realized that she had matured. She was working as a copywriter, a catalogue compiler and courier and had her work cut out caring for her children. They needed more than just to be fed.

“I have no social ambition. I just need enough money to live on, peace of mind and the chance to indulge what I love: writing and reading. I appreciate quiet, and having my children close by. I also love to travel. This is the only thing that does require extra money — apart from buying books. I’ve been collecting a library since childhood: books on philosophy, poetry and art. We have a small living room, but it has three large bookcases, each full of books, from floor to ceiling. My family are angry sometimes when I bring home something new. I hide books — in my clothes or behind the children’s sledges in the corridor. When my husband discovers them, I have to lie, saying that they’ve been there for a long time,” Olga admits.

After Daniil was born, Olga’s work increased so much that she only had a couple of hours a day — when the children were asleep — to spend on her own pursuits. She sometimes neglects housework in favour of poetry. If she didn’t, her book would never have been published!

“I recently read that you need more than talent to ensure artistic success. You need determination to achieve your goals. I’ve always lacked this, and have missed out on opportunities to send my poems to magazines for publication. However, on compiling my poetry collection, a miracle happened: the Editor-in-Chief of ‘Novaya Realnost’ (New Reality) magazine, Alexander Petrushkin, offered to publish my book on Megalit portal,” the poetess tells us.

Ms. Zlotnikova devoted her second book — ‘Dandelion Honey’ — to her sons. The first — ‘Sound Birth’ — was published in Minsk in 2011, and the third has been co-authored. “Sometimes, I spend a day on a single word. However, the required words come when I ask God to help. Moreover, they are then so wonderful that I feel as if they’ve been written by someone else, with myself only as a mouthpiece,” she adds.

She resembles her poems in her beauty, with large amber eyes and a charming smile. Reading her works, you can learn so much about her. Ms. Zlotnikova’s poems are published in ‘Nash Sovremennik’ (Our Contemporary), ‘Neman’, and ‘Novaya Nemiga Literaturnaya’ (New Literary Nemiga) magazines, as well as online, across several Internet editions.

Her ‘Congregation’ collection is soon to be published but isn’t being released commercially.