Pupils are taught ancient handicrafts in the Brest Region’s districts

Not new, but eternal

528 schools and 489 preschool institutions of the Brest Region opened their doors in the new school year. Almost 156,000 pupils have come to study there. However, today’s pupils study not only physics and chemistry. After lessons, during the weekend boys and girls will go to musical schools, eco-educational institutions, sports circles and clubs. Much was done in the Brest Region in order to revive national handicrafts — pottery, woodcarving, cooperage, weaving and others. Therefore, centres of handicrafts are ready to receive children of different ages. Art workers are initiators of that. Reviving Belarusian traditions in handicrafts, the masters impart their skills to the children. 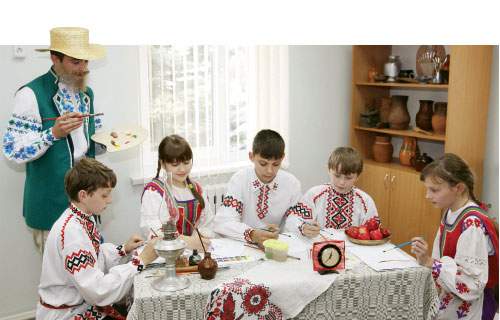 For example, Bereza Centre of Handicrafts revived a craft which was popular earlier — making chip bird-amulets. Young master, Alexander Lavrinovich, studied under well-known woodcarver, Nikolay Galaburda, from Sudilovichi village. Once, such a bird rescued young Nikolay in Germany. The Nazis drove away the guy as a captive for compulsory labour. In his spare time he made amulets and exchanged them for bread.

Our ancestors ascribed a miracle force to the wooden bird, called it a custodian of children, a symbol of family happiness. However, the amulet should not be stored at home for long. The Director of Bereza Centre of Handicrafts, Natalia Kovalevich explained why. “Made of aspen or linden log, the amulet was hung up over a table, a cot, and after Christmas it was burnt in the stove or in fire on Kupalie night. It was believed that the bird took away all evil, therefore it was necessary to burn away all the evil which the bird kept, and then to make a new amulet.”

Another ancient custom of Belarusian villages was revived in Pruzhany — they learnt how to wind dolls. It is possible to admire Lyalki-motanki (wound dolls) in the Centre of Creativity of Children and Youth.

‘Lyalka-motanka’ is considered to be one of the most ancient symbols of Slavic culture. Our grandmothers and great-grandmothers were able to make it without needles, and at times even without scissors, while we have forgotten this skill. Now it is time to return to this unsophisticated art. The Director of the Centre of Creativity of Children and Youth in Pruzhany, Alena Pukhnarevich, recollects that it all began with the creation of a new circle of the European toy. “We decided to return to the past. We talked to old women, drew sketches of dolls which once were wound by our ancestors in the Pruzhany District and some information was found on the Internet. Then we held a master class. Now, all our teachers practice making dolls and our children also learn the craft. Initially ‘motanki’ were used as amulets, but in the present day, these dolls are in demand as souvenirs. We started making such dolls and the first was a doll-herbalist. We fill the doll’s head and chest with thyme. In the summer we can also use other herbs, which we gather, like mint, or Belovezhsky balm. The doll-grainer is filled with grain. By old tradition it is necessary to wind, following movement of the Sun and to carry out an odd number of windings. The doll is made faceless as the owner should paint her face.”

Pupils ‘have wound’ amulets for all their relatives and now intend to make them for sale.

The Belarusian town of Ivanovo is well-known for its tuns and tubs. Since 2000, the unique Belarus cooperage school has been operating in the city, and recently was renamed Ivanovo Children’s School of National Arts and Crafts.

“Is it difficult?” I ask Dima Svirepa, who is the grandnephew of the famous cooper, Sergey Ivanovich Svirepa, from the suburban village of Rylovichi.

The boy shrugged his shoulders, “I’m already quite skilful. However, at first, my hands ached.”

The boy doesn’t have blisters on his hands but boasts enough excitement and enthusiasm.

Meanwhile, both boys and girls are able to spin a pottery wheel. With the aim preserving and popularising the best traditions of the potter’s craft, a pottery centre was opened in the Stolin District’s Gorodnaya village in 2003, thanks to the efforts of a local teacher and now its treasurer, Olimpiada Leonovets. At present, the centre is famous all over the Polesie area and it is unique in our country.

Pottery is taught here to local schoolchildren by a hereditary potter and master of the Pottery Centre, Avraam Basovets, a laureate of the Special Award of the President of Belarus for achievements in the sphere of culture and arts in the ‘Folk Creativity’ nomination.

Another craft, registered into the List of Intangible Heritage of Belarus, can be mastered in the Brest Region — that of rootstock weaving.

I found craftswoman, Maria Kravchinskaya, working at the weaving loom in the rural club of the Kamenets District’s Podbela village. She showed me a ‘dyvan’. This is how a woven bedcover is called in the Kamenets District. It showed red roses against a blue background. When she turned it upside down, there were blue roses against a red background. The bedcover is reversible, without any wrong side. It’s as if it comprises separate woven cloths which are connected with each other along edges and in the places of patterns. Maria Ivanovna mastered this skill here, in Podbela, and then taught her daughter Natalia, her friends and granddaughter Karina. Now, several local school-children attend classes at the club in the evenings.

Not far from Podbela, the village of Kamenyuki is located, which has a House of Crafts and Culture, where craftswoman, Nadezhda Gritsuk, teaches children rootstock weaving. Here, boys and girls study how to work with timber, since the Director of the House of Crafts and Culture, Irina Kushneruk, is a famous woodcarver — the only woman in our country who carves delicate figurines with the help of a chain saw.

I asked Irina how contemporary school-children are keen to learn almost forgotten crafts and will her efforts, and those of her colleagues, help to preserve and return these forgotten skills.

She replied immediately. “Children are delighted. The forgotten can be returned but we need to enhance the prestige of masters in society.”

Then I ask the children whether the mastered are worthy of honour. “Of course,” they respond.

Some twenty years ago, it was difficult to imagine that clay pots, baskets, rushniks and vyshyvanki (traditional clothing decorated with embroidery) would be in great demand at trade fairs. Now, such items are ‘trendy’, as they say, and ancient crafts will live due to our countries efforts without any doubts.