The local exhibition of miniatures — On Bravery, Heroism and Glory — is held in the National History Museum

The local exhibition — On Bravery, Heroism and Glory — is not merely entertaining — it’s rather educational too.

Any Soviet boy dreamt of tin musketeers, grenadiers, dragoons and lances, but even modern children are fond of toy soldiers, despite enormous cartoon Spider-Men or Minions. Of course, it’s impossible to play with them at the National History Museum, but everyone can look. The local exhibition — On Bravery, Heroism and Glory — is not merely entertaining — it’s rather educational too. Near stands with miniatures

“Most of my soldiers are not tin, but made from modern materials like metal polymers,” explains the author of the collection, Boris Kupchinov, adding that metal figurines are not popular at present. Smiling, he notes that his hobby began with clay toys — making around 800 such soldiers in the past, which were shown as part of his first exhibition (Boris was twelve year old then).

The master does not know exactly how many figurines he has made; probably, there are several thousand of them. The man has no plan to count them, as his major task is his artistry. Mr. Kupchinov reads a lot before beginning work on a new model. He prefers historical books published in the 1960-1970s by authoritative academicians. Afterwards, he surfs the Internet to be sure that he’s on the right path. The man admits that the Net contains a lot of false information while he, in turn, aims to ensure his work matches the original ‘soldiers’. Mr. Kupchinov’s figurines are around 4-5cm tall (scales ranging from 1/30 to 1/50). 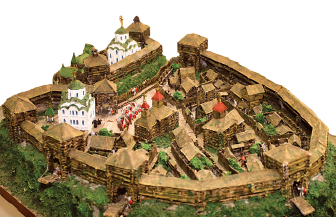 The master loves the Medieval times, focusing mostly on the events which took place on Belarusian territory and, mostly, in the Gomel Region, where he was born. Among his works are diverse composite pictures: a plot from The Tale of Bygone Ages (Duke Vladimir’s fight against Radimichi) or a battle near Loev, where Bogdan Khmelnitsky’s troop was smashed.

His collection includes sculptures of many famous personalities: Napoleon Bonaparte, Mikhail Kutuzov, Jeanne d’Arc and Genghis Khan. Mr. Kupchinov says that it’s not a problem to create any figurine — even Spider-Man. However, he has no plans to change his focus. The master is faithful to his military and historical miniatures which enjoy much demand. He admits that less than a dozen composite scenarios are presented at the show as the remaining works are kept at museums around the world, including in Russia.

Boris also receives orders for miniatures of different buildings. Among them are famous castles and park ensembles of Belarus. In addition, the museum exhibits Great Patriotic War machinery and sea vessels — made from matches. The latter are Mr. Kupchinov’s childhood hobby, but nowadays, he prefers his toy soldiers.
Заметили ошибку? Пожалуйста, выделите её и нажмите Ctrl+Enter