New horizons for the development of biotechnology 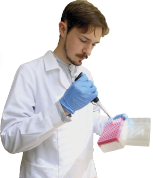 It is an important event, opening new horizons for the development of biotechnologies in our country. It is important that this field is capable of resisting the total chemicalisation of the environment. Considering that about 20 percent of the population of the developed states already suffer from allergies and the WHO calls to move away from preponderance of pesticides and antibiotics in agriculture, it is the most important task. And here we have own groundwork.

The EurAsEC is already thinking of outlawing antibiotics in the sphere of stockbreeding, but then there arises a question: what will replace them? The Institute of Microbiology can offer ready recipes: five probiotics items were developed. There is also an alternative to pesticides — a means of biological control. Preparations for clearing of air, water, soil and many other things are being developed. While all of them are practical results of biotechnologies claimed also in medicine, nature protection activity, bio-energetics, and light and food-processing industry and promoting gradual transition to a new level — bioeconomy. It is necessary to say that last year, our biotechnological branch issued production of Br7 trillion, while part of production was delivered for export. Volumes grow, and the big merit in it belongs to the scientifically-practical association of Chemical Synthesis and Biotechnologies which includes Institute of Microbiology.

According to the estimations of the Director of the Institute, corresponding member of the NAS, Emilia Kolomiets, new Centre of Analytical and Genetic Engineering Research will help scientists work at a level of which it was possible only to dream. The equipment is advanced, with chromatograph (gas and high-efficiency liquid), sequenators and DNA amplifiers, where results can be received in real time, and many other things. Generally speaking, the institute now creates the whole chain; starting from molecular biology to industrial production. At the end of 2009 the Biotechnological centre was created and even at a small capacity it annually produces 30 tonnes of preparations, the work is carried out in three changes and the enterprise has already produced Br31bn of production and 50 new biotechnologies are mastered. These figures are impressive. Emilia Kolomiets is sure that it will be with preparations developed at our institute that our agriculture and other branches will learn what biotechnologies are and what are they capable of. However, without modernization and a modern approach today, it is impossible to hold out in the market. So the creation of the centre is the necessary next stage. Its equipment will allow receipt high level ferment preparations, probiotics with antivirus and antimicrobic activity preparations, strains for the manufacture of lactic acid and biobutnol (the biofuel of the next generation).