Brest has been recently named Belarus’ sporting capital — too pompous?

Brest has been recently named Belarus’ sporting capital — too pompous? Probably, but residents from other cities won’t agree. Minskers will wave their hands thinking that regional residents are too arrogant, yet Brest citizens will remain unchanged in their opinion.

Attraction towards physical culture and sports in Belarus is a top priority of state social policy. However, the formation of a healthy lifestyle isn’t only skating, cycling and skiing. This also encompasses cultural events and highly-developed medicines. However, first things first. 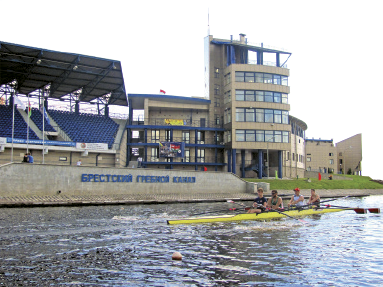 Olympic athletes are an example for everyone


At present, the Brest Region boasts all conditions for athletes, able to worthily represent Belarus at international competitions and Olympic Games, as well as for all those who are too bored to just sit on the sofa in the evening or write comments on social networks.

The Brest Region has created Belarus’ first Olympic rowing champion — Sergey Makarenko. The Olympic movement originated and developed in the region as an indispensable part of mass sport. Archives have preserved documents testifying that the first physical societies appeared in Brest back in the 1890s. These were small circles and groups at education establishments. They were engaged in swimming, rowing, cycling and skating in winter. In 1893, a branch opened in the city of the Russian Society of Tourist Cyclists, and a group of enthusiasts made an unprecedented (in those times) race — as long as 136 ‘versts’ [an obsolete Russian unit of measurement, equal to 1.0668km] — covering Brest-Kobrin-Verkholesie-Velikorita-Brest route. By the early 20th century, physical culture and sport ‘captured’ the garrison of the Brest Fortress. Officers organized a group of ‘gymnastic exercises’, focusing primarily on exercises with weights, running, jumping and shooting. Sport first became a significant event of public life in the 1920s, when Brest turned into the centre of the Polesie Voivodeship of Poland. During this period, here, as well as in Pinsk and other cities and locations, numerous sport teams and sections appeared, and even mass sport unions and organisations. For example, one of these was the sport and education organisation Sokol (Falcon), whose major motto were the famous words ‘A sound mind in a sound body’.

The Brest Region counts its sport achievements from 1928 when Brest’s, Nikolay Dranko performed as part of the Polish cycling team at the 9th Summer Olympics in Amsterdam.

Today, the Olympic Glory of the Brest Region boasts 21 awards — 4 gold, 5 silver and 12 bronze medals. Our Olympic champions include Sergey Makarenko (kayak and canoe rowing at Rome in 1960); Leonid Taranenko (weightlifting in Moscow in 1980); and Yulia Nesterenko (athletics at Athens in 2004).

In the last decade, over 150 contemporary sport sites have appeared in the region. Each year, the Brest Region hosts around 500 sporting events and such support can’t but yield fruit. In 2013, Brest boxers, weightlifters, sambo wrestlers, fencers, acrobats, track-and-field athletes, riflemen and representatives of other sports brought 58 medals from various competitions, including international, of which ten awards were gold medals. The Brest Region has also achieved team victory in the complex national competition — Olympic Days of Youth. 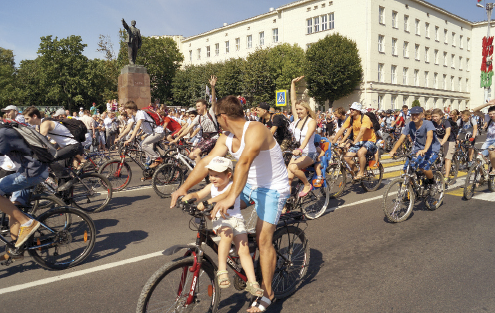 2014 Bike Ride became a distinctive event in the regional centre

A sound mind in a sound body


You may say that big sport and a healthy lifestyle are two different life substances. Yes, I can agree. Big sport is not only successes and victories but also injuries, disappointment and tears. However, what if we look from other side? Runner, Yulia Nesterenko, rowers, Yulia Bichik and Natalia Gelakh, gymnast Lyubov Cherkashina and other successful athletes are an example for everyone.

Brest youngsters roller-skate in summer evenings at the Rowing Canal and ski there in winter. Moreover, cycling is gaining popularity in Brest, and in July, the city hosted the first international cycling festival: Brest-995 Years.

The event brought together 1,350 participants (representing cycling clubs from Belarus, Lithuania, Poland, Ukraine, Russia and even citizens from Switzerland and Australia). The youngest entrant of the cycling festival was just 4 years old, while the oldest was 76. The festival marked the 20th anniversary of the trip from Belarusian Brest to the French city of Brest. Two decades ago, on July 28th, 1994, a group of 8 Brest enthusiasts, headed by a teacher of physics at the Brest Technical University, Anatoly Gladyshchuk, started from the city over the River Bug. The athletes covered 3,342 km and nobody has risked repeating this unique trip so far.

However, this is not the most important thing. Mr. Gladyshchuk is confident that they promoted the popularity of cycling. “In the near future, the city over the River Bug will become known by its international cycling marathon. Look, how many people currently use bicycles,” he said.

Nevertheless, no fewer skate on yard skating rings in winter. Even in summer many don’t hide their skates, since ice arenas are built in Brest, as well as in Pruzhany, Bereza, Kobrin, Ivatsevichi and Baranovichi.

Local residents note that previously, cars were standing at parking places near cafes, while now the same situation is observed near ice arenas in the evening, where there’s barely room to move, as too many people wish to receive their dose of adrenaline, an energy boost or to meet with their dear friends. The re-evaluation of values is apparent. It’s better to visit an ice palace (a swimming pool, take part in beach rugby or roller-skate) than to drink beer, because it’s fashionable to be healthy. 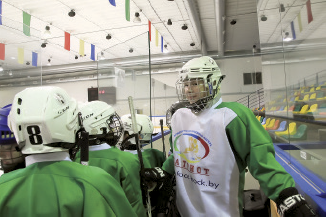 It becomes fashionable to be healthy

Medical tourism. Why not?


The thirst for a healthy lifestyle stimulates the development of medicine. Chief Doctor at the Brest Regional Sport Medicine Centre, Sergey Yevdolyuk, is confident that Brest has every chance to become an attractive centre of medical tourism in the border area.

Visits from abroad to local dentists have already become popular, especially among our fellow countrymen, who live overseas: in the USA and Canada. Foreigners are also keen on our spas, and not only are Russians among such tourists. For example, Poles also often recuperate in the Brest Region, being attracted by price and the diversity of recuperation services, alongside good dietary nutrition.

Mr. Yevdolyuk suggests moving forward and earning money on diagnostics of tourists. A weighty pro argument is our lower prices, with the availability of unique medical equipment and international standards in diagnostics and treatment. Before sending a group along the cycling route or even for a long sightseeing walk, a tourist firm may invite guests to examine the opportunities of their cardio-vascular system.

Once can also drop into a dispensary after the excursion; it offers a unique system of restoring the functions of human body. What’s stopping a tourist bus, leaving abroad for vacation, to stop for express-tests? In Brest they can be given a clinic card in line with all international standards, yet for lower price. Meanwhile, the Brest Dispensary is far from the only medical institution with solid equipment. The programme of health sphere modernisation is being implemented countrywide, with high-tech specialised scientific and practical centres appearing. Even district hospitals have been considerably renovated. Probably, we haven’t looked on this process as a promising and commercial project yet. However, we shouldn’t exclude that huge investments in healthcare can bring in tangible economic benefits.

Before eating, learn how to mow


Healthy lifestyle also presupposes various creative contests and festivals, which are gaining in popularity. Almost every month, the Brest Region hosts a cultural event. The Ruzhanskaya Brama (Ryzhany Gates) and Kamenetskaya Vezha are held in June while Brest’s birthday is celebrated in July. August is known for its Motol Delicates and Sporovo Haymaking festivals. Meanwhile, the Day of the Belarusian Written Language is traditionally held in September, alongside the Belaya Vezha Theatre Festival and Promoting Healthy Lifestyle exhibition-trade fair.

I visit many places: both in the call of duty and in the voice of the soul. I am surprised and filled with admiration. My favourite festivals are the Motol Delicacies food forum and Sporovsky Hayfields ecological competitions. The Belarus Championship in Hand Haying — Sporovsky Hayfields — is held in the Sporovsky Republican Reserve (in the Bereza District). A red-hot sun beats down mercilessly and your legs sink in squishing water. It’s difficult to walk in gumboots and sedge, bulrushes and small shrubs trip you up over and over again. In order to achieve victory in team competitions, a pair of mowers must mow a 3m wide and 100m long section most quickly and qualitatively.

The Director of Sporovsky Reserve, Vadim Protasevich, is confident that the championship adds health and mood while also revealing the problems of lowlands. “Mowing promotes the preservation of swamps, as well as plants and animals, many of whom are registered in the Red Book,” he explained.

While mowing is practiced on one bank of the River Yaselda, tasty and healthy food is cooked on the other, in the Ivanovo District’s Motol village. The festival is also organised in August, disclosing the cuisine of our ancestors and folk crafts. Over several years, Motol has become a centre of attraction of people who appreciate traditions and love their country.

If we think about it, all cultural events provide a definite orientation for healthy lifestyle, therefore look at the calendar and choose the event that will fit your soul and taste. Visit the Brest Region, where many aspire to live their long life.