Never too old for treatment?.. 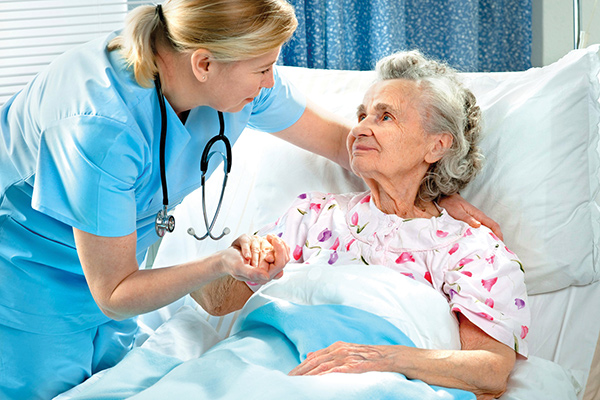 Most recently, a 100-year-old woman received surgery in Novosibirsk, while British doctors removed a carcinoma from a 99-year-old woman from Manchester. In Dnepropetrovsk, a patient aged over 100 years has received an artificial hip joint. Many such cases exist: more than 600 people aged over 100 worldwide have undergone endoprosthesis replacement. Belarus is seeing more surgeries than ever on patients aged over 80: a notion previously deemed inconceivable.

Minsk’s City Clinical Emergency Hospital carried out cardiac surgery on a 100-year-old woman 18 months ago, due to acute myocardial infarction. It’s never easy to endure an operation at such an advanced age but a council of physicians set out their tactics of treatment, giving her a heart stent, to restore normal blood flow. Afterwards, she spent time in an intensive therapy unit for cardiac patients, before going to the cardiology unit, and then returned home.

Early in the year, the hospital performed roentgen-endovascular (intravascular) surgery on a 94-year-old woman. With minimal surgical intervention under local anaesthesia, the possibilities are far greater for older patients. A needle is placed directly inside blood vessels, without the need for a traditional incision. Then, X-rays are used to follow the progress of the operation. Patients recover quickly and age is no barrier, explains the Deputy Head Physician for Surgery at Minsk’s City Clinical Emergency Hospital, Igor Shimansky. He notes that elderly people are receiving operations far more frequently as a result; almost two thirds of those receiving roentgen-endovascular surgery are nearly 80 years old.

Alexander Beletsky, a corresponding member of the NAS of Belarus, and Director of the Republican Scientific and Practical Centre for Traumatology and Orthopaedics, agrees that age is no hindrance. His oldest patient was 105: successfully operated upon following a cervical hip fracture. Traumatology holds the world record, with a patient aged 115 years. Such surgeries tend to happen only in emergency cases, with all risks estimated; doctors always try to decide in patients’ favour, joking that where pulse and breath continue, operating is still an option. Of course, there are times when elderly people suffering from multiple illnesses and problems can find surgery more than their body can bear.

Vladimir Karanik, the Head Physician of Minsk’s City Clinical Oncological Dispensary, tells us, “We always assess patients’ physical condition, and their ability to undergo surgical intervention; if there are no contra-indications, we perform surgery. Our oldest patient was 101 and, this year, we operated upon a 93-year-old.” Where other illnesses are present, oncologists avoid surgery, regardless of age, although age does influence the process of rehabilitation.

Globally scale, certain restrictions are apparent regarding the age of patients, due to economic constraints. Meanwhile, organ transplants are rarely given to those beyond a certain age.

NAS academician Alexander Mrochek, the Director of the Cardiology Scientific and Practical Centre, notes that an individualised approach is essential, with the saving of life, and improving of the quality of life at the heart of decision-making. He explains, “In the civilised world, there are no barriers to medical aid, regardless of age. All depends on the condition of the patient. Traditional operations present a major risk to the elderly, who benefit from modern technologies. For example, we can place a valve into the aorta. It isn’t that rare for us to perform surgery on those aged over 80 years, but it’s usually in emergency cases.

Naturally, as our population attains longer mortality, medicine needs to focus on the older generation. Lyubov Voronina, an Associate Professor Chair of Gerontology and Geriatrics, specialising in allergology at the Belarusian Medical Academy of Post-Graduate Education, notes that life expectancy is rising worldwide, with more people than ever living beyond 80 and, even, reaching 100. Naturally, this is changing the face of medical care. Associate Professor Voronina is optimistic, saying, “There is no age restriction to surgery! Obstacles more often exist in the heads of patients, their relatives and, even, doctors. Doctors regularly perform coronary artery bypass graft surgery on people aged over 85! Operations to insert prosthetics are often successful.”

Ten years ago, Belarusian ophthalmologists were the first in the world to operate upon a woman aged 117; she had been completely blind for four years but her heart was strong and blood pressure normal. Accordingly, she was given implanted artificial crystalline lenses.